Ever wanted to rant about something or be your most candid self on Twitter but only want your close pals to know? Although you can create a private account for your dearest pals—something like a finsta—this will take a few more taps to switch accounts on your phone.

An answer to Instagram's close friends feature, Twitter has rolled out Twitter Circle allowing you to tweet to a smaller crowd instead of all your followers.

This new feature began testing in May 2022 and has been made available to users on iOS, Android, and the Twitter website globally on Aug. 31.

According to the app, this feature aims to personalize the Twitter experience and enable users to feel more comfortable expressing themselves, eliminate the need for secondary/alternate accounts, share content with your close group of friends, and avoid toggling between protected and public account settings.

add up to 150 people to yours and use it. please. pic.twitter.com/D6AE4OhRX5

How basic are you? This site tells if your music taste is niche or mainstream

With Twitter Circle, you can choose who can see and engage with your posts. Tweets posted within a circle will show up with a green badge that reads "Only people in @user's Twitter Circle can see this tweet." If you see tweets with this tag, it means you're in somebody's circle, and if you don't want to be in it, you can unfollow or block that person's account.

To start, compose a tweet per usual, then at the top right corner next to your icon, tap on Everyone to choose your audience. Select Twitter Circle to keep your post on down-low. 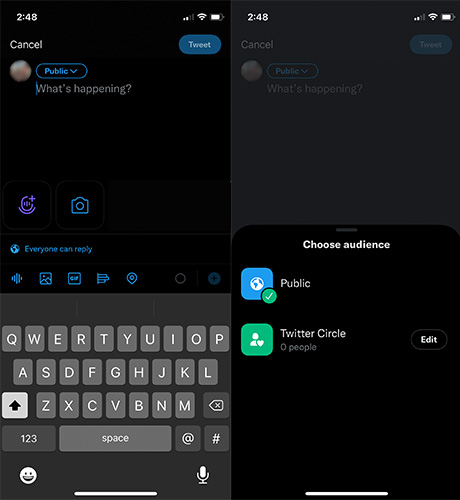 Next to the Twitter Circle option you'll see an Edit button. Once you tap on it, you'll be able to choose which users you want in your circle.

Given its private nature, circle tweets cannot be retweeted or shared, but people in your list can reply to your post. In addition, all replies will be private, too.