In a statement released on Instagram on Wednesday, Dec. 16, jeweller Manila Diamond Studio said the design of Jessy’s engagement ring was, indeed, the “fruit of the collaboration” between the actress and the company.

Jessy Mendiola reveals breakup with Luis Manzano before their engagement

It also said that while the centerpiece piece diamond of the engagement ring was taken from a “ring commissioned” elsewhere, its current make and design are “original.”

This is after Radiant Jewelry, which Jessy said was where Luis originally bought the engagement ring from, said in a statement earlier this week that another company insinuated a work “for something they did not do.”

Manila Diamond Studio further said in their statement that it “takes exception to the defamatory statements by Radiant Lux Jewelry on its social media platforms.”

It added: “With the strongest of words, Manila Diamond Studio denies the accusation of credit-grabbing and unethical practice. The injurious accusation of Radiant Lux Jewelry is simply without basis, in fact and in law.”

"It is most unfortunate that the false statements issued by Radiant Lux Jewlery and the resulting controversy ruined one of the most memorable milestones in Mr. Manzano and Ms. Mendiola's lives," the statement also said.

Jessy, a celebrity endorser of the company, replied to Manila Diamond Studio's statement on Instagram, thanking them for "respecting and taking care of us." 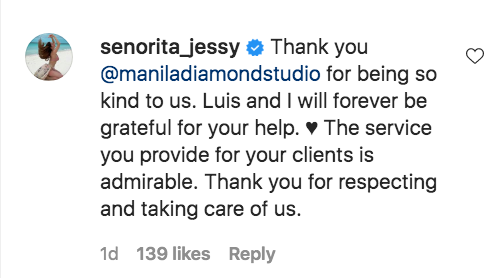 In a YouTube video posted on Wednesday, Jessy shared that she and Luis decided to "reset" the design of the engagement ring after a "negative" experience with a good friend, who was connected with Radiant Jewlery.

In the video, Jessy said her friend from Radiant showed her and made her wear the engagement ring Luis bought for her while they were broken up.

Blake Lively, Justin Baldoni to star in Colleen Hoover's 'It Ends with Us' film adaptation