Jessy Mendiola and Luis Manzano’s Instagram post of their engagement was criticized over the weekend by a local jeweler who claimed they were not properly credited for their engagement ring.

On Sunday, December 13, local company Radiant Jewelry said in an Instagram post that they are the “original creators” of Jessy and Luis’ engagement ring that can be seen on their social media engagement announcement.

“It is unfortunate that a company would insinuate a work for something they did not do. We are the original creators of the engagement ring of Jessy Mendiola and Luis Manzano. In our opinion, taking credit for something they did not do is detrimental to the industry that have ring makers who put their heart and soul to their pieces. Such a post or announcement is very misleading and unethical," the statement read.

Manila Diamond Studio even posted photos of Jessy wearing the said engagement ring in their congratulatory messages for the actress.

Luis took to Radiant’s Instagram post to explain that while Radiant helped them “procure the main stone,” they had a “completely different setting , add ons, and design made thru (Manila Diamond Studio).”

He added that the design of the ring “Jessy is wearing right now is from her own design and (Manila Diamond Studio).” 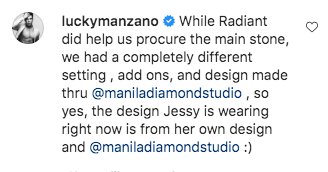 When asked by an Instagram user why they decided to have a different setting and design for the ring, Luis said, “We have the most unique ring/proposal stories,” adding that they will post a YouTube video about the engagement where it will be explained why Jessy designed her own ring.

Jessy and Luis announced their engagement on Saturday, December 12.