To celebrate the release of the BE Essential Edition album, BTS appeared for the very first time on the long-running and iconic live acoustic series, MTV Unplugged.

Fans—known as ARMY—of RM, Jin, Suga, J-Hope, Jimin, V and Jungkook rejoiced upon learning that they would be performing b-side tracks from their latest album in a live, intimate setting.

The show opened with a lively performance of Telepathy, one of the most-loved tracks from the BE album.

Set in a retro-themed game room, the backdrop was nostalgic for viewers like me who grew up watching MTV. Add to the fact that some of the members are sporting Donald Duck references in their outfits. Isn’t that cute?

Telepathy is a song mainly written by Suga. This performance also marks his comeback after recovering from a shoulder injury. Did you know that Suga finished the song in just 30 minutes?

In line with the Unplugged tradition, the group also shared some interesting tidbits in between performances. “It’s really an honor to be part of the MTV Unplugged legacy where so many legends have performed. We’re deeply thankful.” group leader RM expressed.

Blue & Grey is an acoustic ballad track penned by V. “I tried to express my inner sadness and uncertainly, so I translated the feeling of burning out as ‘blue’ and the sadness of not being able to see ARMY as ‘grey,'” V shares.

“The melody of the song is simple, so I paid closer attention to delivering emotions through the lyrics.” he added.

Youngest member Jungkook also expressed his gratitude for the opportunity of them performing some of the tracks. “All the songs on our album are special to us. We don’t get many chances to perform our b-side tracks besides at our concert so we’re thrilled to perform them on MTV Unplugged.”

As a surprise for ARMY, the group covered Coldplay’s classic hit, Fix You.

It is no secret that the group are big Coldplay fans, and Fix You brought them comfort especially during the lockdown. What I personally love about this simple yet heartfelt performance is the way the rapline (Suga, RM and J-Hope) blended well with the vocal line (Jin, V, Jimin and Jungkook) making the song their own, and how they performed with such ease and confidence while sitting formally in the high stools.

Before proceeding with their #1 hit single, Life Goes On, Suga expressed his thoughts on performing remotely due to the still ongoing pandemic: “We were supposed to show you these stages at a live concert, so we’re sorry we had to do it remotely, but hope many of you still enjoyed it,”

J-Hope then added, “We wait for the day when we can sing for you in person. We will do our best until then. We love you.”

Life Goes On performed with a live band hits differently. The harmonization between the members truly gives hope and comfort in these trying times.

Of course, the set ended with a fun and optimistic rendition of their 2020 record-breaking hit, Dynamite. We’ve seen the song performed numerous times in award shows, virtual concerts and random TV guestings, but what makes every Dynamite performance special is how they put little twists and adlibs in their performances even if they don’t show their fun choreography for the song.

I just love the energy whenever they perform with a live band! 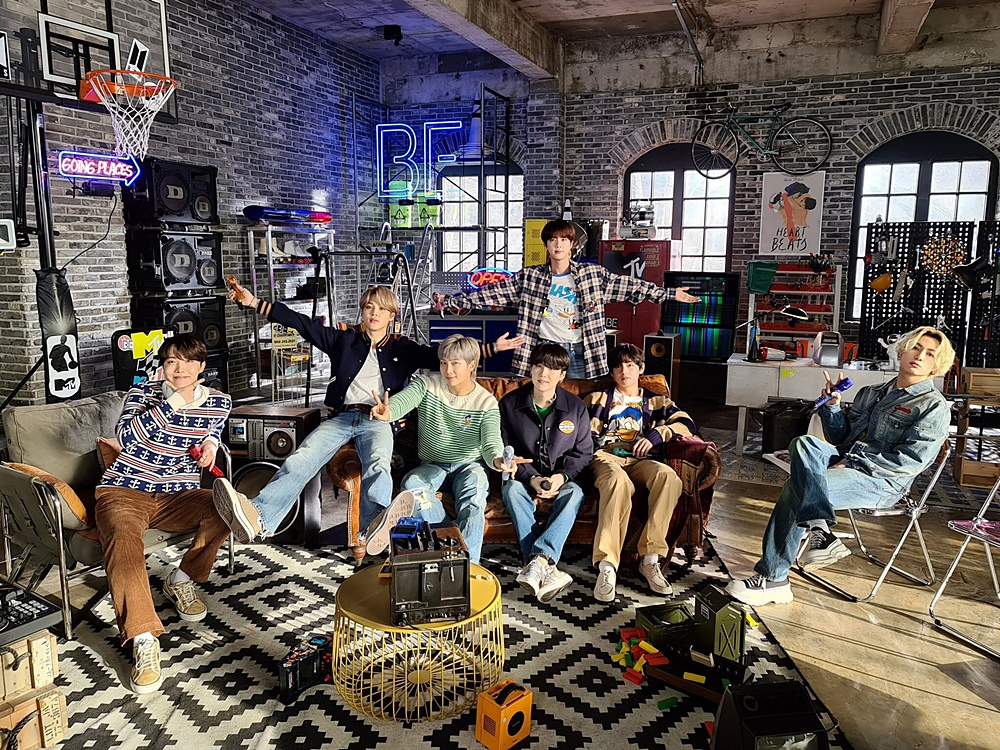 Honestly, 30 minutes with five songs is too short! MTV, we need more!

While waiting for the live performances of Dis-ease, Fly to my Room and Stay, might as well buy or stream the BE Essential Edition album now!

Mica is the blogger behind www.senyorita.net. While in quarantine, she spends most of her time fangirling over The Beatles, Spice Girls and BTS.