Beauty pageants have always captivated Filipinos because of its glitz and glamor. But a recent competition in Negros Oriental has proven that even without the razzle-dazzle, the Filipina beauty never fails to impress.

The pageant titled “#NoFilter: The Search for Negrosanon Queen 2021” featured 25 contestants who vied to be the first #nofilter beauty queen without wearing any makeup throughout the competition.

A brainchild of Congressman Arnie Teves, the online beauty pageant aimed to celebrate the raw and natural beauty of Negrosanan women. The congressman revealed to PhilSTAR L!fe that he has been thinking about the concept over the past few years.

“And I’m a very honest and sincere person, so kung haharapin kita, ‘yung katotohanan,” he added. “So finally, I was able to do it.”

Applications were opened to single females aged at least 17 years old and residing in Negros Oriental. She must be confident in her most authentic self and have not undergone any physical enhancements.

The pageant’s preliminary round was done online with the candidates performing or answering questions in videos they themselves recorded—and without filter.

The candidates were likewise restrained from wearing makeup in photoshoots and the coronation night.

“Even during our pictorials, they did not put any powder, concealer, or foundation. In fact, they were made to wash their face or wipe it with toner or wet wipes before the shoot and even during the pageant night,” the pageant's creative director Bayong Fontelo told PhilSTAR L!fe.

Still, the ladies looked radiant, as seen in these portraits:

The grand finale was held at the Bravo Hotel on Feb. 6 and streamed live on Facebook.

Kathryn Mae Gadingan Salacut of the municipality of Tayasan was crowned #NoFilter Negrosanon Queen 2021, apart from being awarded Best in Swimsuit, Best in Gown, and Best Speaker. 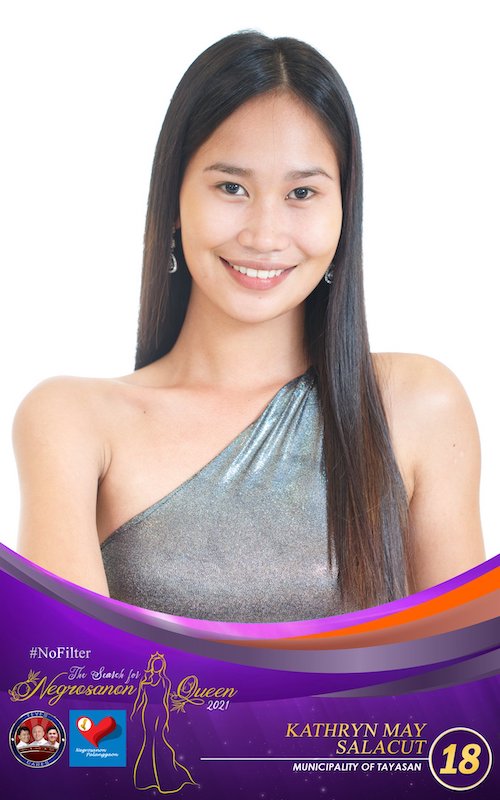 Salacut won the night with her answer in the Q&A portion about her experience as a COVID-19 survivor.

“I found hope because I was able to survive COVID. As a survivor, it taught me various lessons that I need to keep in myself. My patience was tested as well as my faith in God,” she said. "But one thing that really hit me was to think of those unfortunate people who have been struggling more than I [have]. I think of those children who live by the streets while their rights are being compromised and that’s what became my source of strength.”

“I joined the #NoFilter Negrosanon Queen for I know that through this pageant I will be able to use my voice to speak for the poor and hungry during this pandemic,” she continued. “I believe that a Negrosanon queen embodies the core values of humanity, spreading love and positivity, and not withholding her capacity to help people, but rather by telling others that there is more to life and that life is worth living." 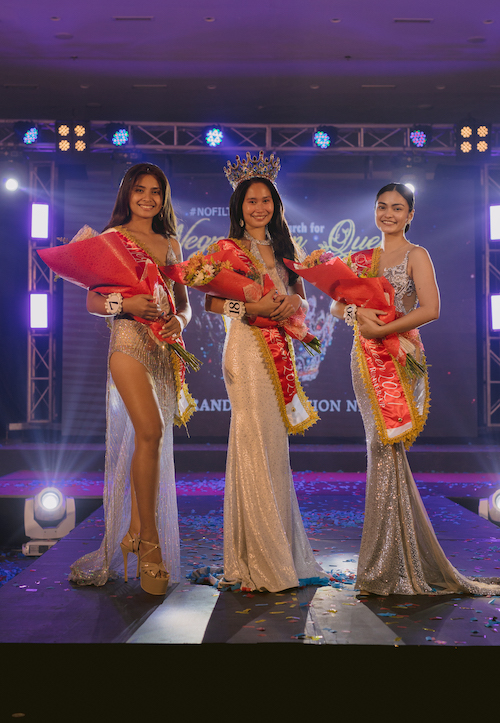 Hailed as the first runner-up is Daphne Kyara Algame of Bais City and Renelyn Deguit of the municipality of Ayungon as the second runner-up.

It was clear that many Filipinos were amazed by the “one of a kind beauty pageant” as the photos of the event have gone viral shortly after its release the following day.

With that, the congressman and his team are now planning to take their advocacy to the national stage within the year and worldwide soon after.

Aside from showcasing the natural beauty of Filipinos, Teves sees the upcoming nationwide pageant as a channel for promoting tourism in our country.

“That is our main goal, [feature] ang natural na ganda ng babae. But during the course of our contest, when we were asking for videos, ang napansin ko, karamihan sa kanila nagshu-shoot doon sa magagandang tanawin. So automatic, nakakatulong sa tourism natin without even me asking for it,” he said.

“Ngayon, isama ko ‘yun na if possible, do your shoot in the beautiful places of your barangay. With that, we are already helping promote the beautiful sites of our country and the tourism industry at the same time,” Teves said.

LOOK: Stars of 'Disenchanted' dazzled at the red carpet for the film's premiere