Style Celebrity Living Self Geeky News and Views
In the Paper Shop Hello! Create with us

When Erika Liana Ypil and Jayson Ong got engaged on Jan. 11, 2020 the world was in relative order. Or at least in the kind of chaos and order we could manage and were used to.

Then the coronavirus began to spread outside Wuhan, China but even then no one could have predicted the havoc it would wreak on the world or how, after a year, it continues to prevent personal milestones from happening—a freedom we had always taken for granted before the pandemic.

After Jong proposed, they booked their wedding for the following year, in February 2021.

“We booked our suppliers weeks after the engagement,” Eka says. “Our first wedding date was Feb 10, 2021 then we moved it to April 5 due to our parents’ wishes and we wanted to honor their request.”

In early March 2021, while the country still had restrictions under GCQ (general community quarantine), Filipinos had some freedom of movement. Then on March 21, the first ECQ (under the guise of a stricter GCQ) was declared for two weeks, and extended again to April 11, and finally MECQ (modified community quarantine) until April 30.

“The third postponement of our wedding was when ECQ was extended. Months before the wedding, we were told by our caterer to add tables because of the IATF guidelines, and that meant additional cost,” Eka Ypil, who would have been Ypil-Ong talking to PhilSTAR L!fe now, said.

“Come late March, when we originally had 100 guests, some of our friends and their families got infected with COVID and couldn’t join us. So we needed to call our caterer to politely ask for a refund, buti na lang understanding sila. We planned to stay overnight at a hotel too before our wedding. I rebooked once and had to refund the second hotel we next booked as well.”

The wedding was on and off thrice, from February to April, that a photographer friend told them, “Ano ba yang wedding niyo, parang Korean telenovela! Kaabang-abang!”

This comment inspired the couple to come up with a Netflix series-like wedding announcement. Will they finally wed in the next season or will it go on like a soap opera that just won’t end?

Erika explains they didn’t have a prenup shoot, saying they’r eboth very shy, “but we wanted something like a teaser. Jayson is very creative and full of ideas. Before that Netflix invite, he thought we could produce video credits or a K-drama-inspired teaser to thank our suppliers in advance (for their patience sa tuwing nagre-rebook kami). “

They produced their own video, being in front and behind the camera filming the other or using a tripod. It was directed by Jayson and edited by Eka. 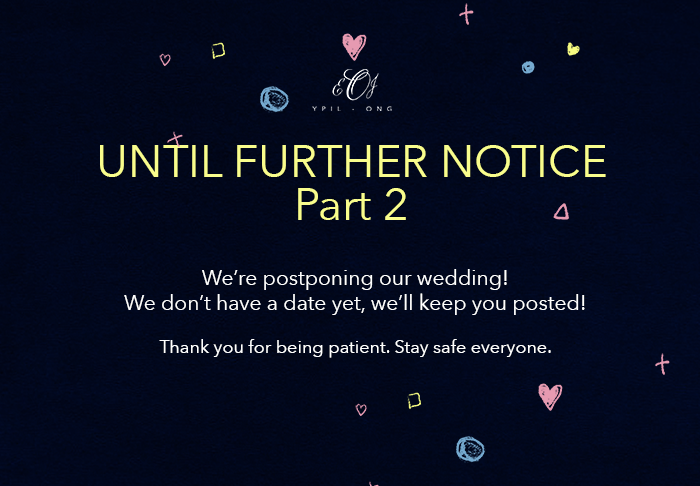 Eka describes the first wedding postponement: “Grabe, mixed emotions! I felt excited but at the same time sad for friends and friends’ families who had gotten COVID. The surge was alarming, we didn’t know what to feel anymore, hopeful ka na hindi! How do you explain it? It’s supposed to be a celebration hanggang sa maiisip mo, matutuwa ka ba sa nangyayari sa paligid mo?”

With the second postponement, she continues, “We wanted to blame it on the virus, this pandemic, and sometimes gusto mong manisi e, sino nga ba accountable? We hoped that the government managed it better. We learned about other countries being able to prevent it. Here, is it because of matigas ulo ng mga tao for not following guidelines properly? Or is it because we have politicians, not public servants? Hanggang kailan?”

By the third wedding postponement last April 5, Eka was like, “Meh.”

She thought, “Whatever’s best for this country. I did not think about what stresses me anymore, just what’s best for everyone. It’s a process. It felt as if I was waiting for an answered prayer, but this time not for a spouse but for our wedding date.Maybe God has better plans.”

How they met, how it’s going

Jayson and Eka met at a birthday party in the latter’s previous company, GMA News Media. Eka is a multimedia designer and Jong is an IOS programmer.

“At the time I didn’t bother to get to know him and I left early,” she says.

Jayson first saw Eka at the company cafeteria and it was love at first sight for him. “Nagulat siya pag-akyat niya ng office niya I passed by the hallway, officemates daw pala kami!”

It was during this period, Eka says, that she had “accepted Jesus as my Lord and savior. Natanggap ko na rin na NBSB (no boyfriend since birth) forever na ako, so I was okay with it being single.But God had better plans for me, He knew my desires kahit i-deny ko. I did pray for a spouse but only if He willed it. Jayson was an answered prayer.We’ve been together for two years and 11 months.”

But they’re patient because love waits. It can wait when you have the rest of your lives to be together. Love also conquers fears—even the fear of non-refundables!

“We thought, how can we make our event safe for everyone because anybody can be a carrier—even us. Our fears included financial adjustments, the wedding license expiration, the government’s lack of future plans. We thought we might be labeled ‘unfeeling’ because we still wanted our celebration to happen despite the pandemic.”

Eka confides that they know holding a wedding celebration isn’t going to be the same for some time. That took time for them to accept. “Even our family members expressed their frustrations. Some of our plans were to wed at a later date, or just have a civil marriage and hold it next year—-but then again, who knows what will happen? Our parents told us to pray for our event date. The pandemic is beyond our control, not to rush and there’s no point in complaining. We believe in GCQ—God Controls Quarantine.”

One good thing that’s come out of this seemingly endless wedding postponements is that she realized how her husband-to-be is so reliable both in planning the wedding and as an emotional support.

“Jong is optimistic and hopeful. He provided emotional support; he’s an empath and would frequently call to check on me.”

Their May wedding, the date of which depends on IATF guidelines at the end of the month, will be a small garden wedding in Antipolo. They have bought N95 masks and disinfecting alcohol for everyone attending.

Hopefully, Jayson (who’s an A3 category) or both will have been vaccinated by then.

With or without a wedding next month, Eka says they’re hoping “for better days ahead for everyone and healing of our friends’ families.”