The Armed Forces of the Philippines (AFP) has apologized for releasing an erroneous list of names from various universities who allegedly joined the New People’s Army (NPA).

They added that the Office of the J7, AFP is “already conducting an internal investigation” and that the personnel who leaked the list will be held liable.

“We want to assure the public that we are now reviewing our processes and procedures to ensure that similar incident will not happen again in the future. The Office of J7, AFP remains committed to providing and disseminating information on social media platforms that will contribute to a better Philippines for all,” they wrote. 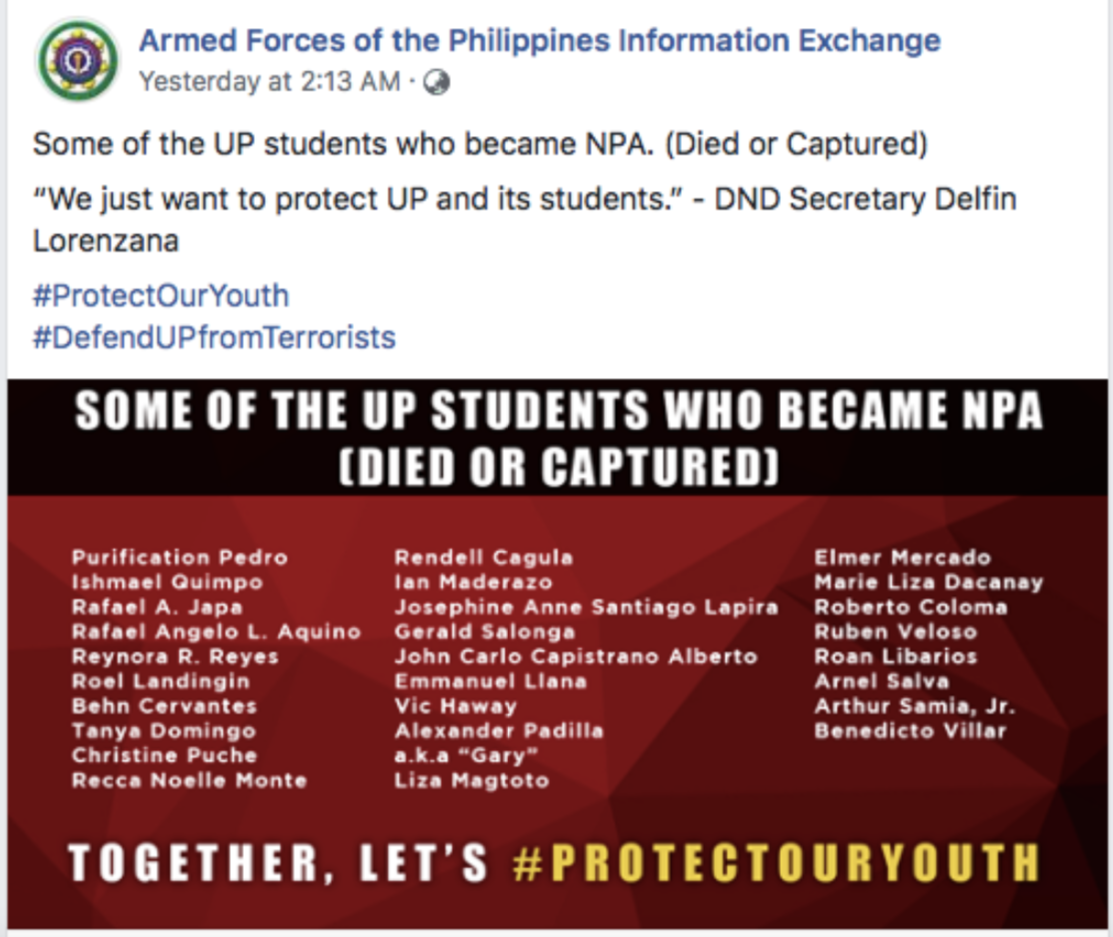 That same day, Defense Secretary Delfin Lorenzana released a video statement on his Facebook page expressing his stand on the abrogation of the UP-DND agreement, to which he says “is a fulfillment of a patriotic duty.”

“My intentions are pure. My goal is simple. To minimize the threat to the youth,” Lorenzana said,

On Sunday, Jan. 24, Lorenzana was quoted by reports saying that the list was “an unpardonable gaffe.”

“It is unthinkable that despite the millions of taxpayers’ money poured into military intelligence, the AFP is making such baseless accusations, in the process violating the civil liberties and putting at risk the lives of responsible citizens who are actively contributing to nation-building in their chosen professions,” Nemenzo said in a statement.

Nemenzo is also concerned of the possibility that the AFP may be holding more names in their database quoting that they have only mentioned “some” UP students.

“The list presents itself as only partial, identifying only ‘some’ UP students. We are concerned that the AFP may be harboring a database of a much longer list of UP students across many years, wrongly and similarly accused as NPA like these student leaders who were our students some forty years ago,” Nemenzo notes.

In the interview, Parlada accused over a dozen universities in Metro Manila as “recruitment havens” for the NPA.

The FEU, DLSU, UST, and ADMU then issued a joint statement, saying they "object" to Parlade's accusation.

“As universities with high aspirations for our country, we seek to direct our students to engage in acts that contribute to the strengthening of social cohesion, defend the country’s democratic institutions, and promote nation-building,” the statement read.

“We therefore object to General Parlade’s statement and emphasize that our institutions neither promote nor condone recruitment activities of the New People’s Army and, indeed, of any movement that aims to violently overthrow the government.”

Joint Statement on the accusations of Lt. Gen. Antonio Parlade Jr on schools being recruitment havens of the CPP/NPA pic.twitter.com/aIlBqxP8LY