Calls to defend the University of the Philippines rang through social media following the Department of National Defense ending the UP-DND accord, which bars state forces to set foot inside the university premises without notifying campus officials.

In a letter released Monday night, Jan. 18, Defense Secretary Delfin Lorenzana informed UP president Danilo Concepcion that the UP-DND accord was “terminated and abrogated” effective Jan. 15 “in order for us to perform our legal mandate of protecting the youth against CPP/NPA activities.”

Together with #DefendUP, hashtags related to the move including #OustDuterte and #NoToCampusMilitarization continued to trend on social media Tuesday.

UP community unites at Quezon Hall to condemn the unilateral termination of the UP-DND Accord and to defend our academic freedom from attacks. Laban, Iskolar ng Bayan! Laban, UP! pic.twitter.com/rlqLkJTq7L

On Tuesday morning, the The UP community mobilized at UP Diliman’s Quezon Hall and called to defend academic freedom from attacks.

Senator Kiko Pangilinan tweeted, “Tinutulan natin ang panghihimasok ng diktator noon. UP has always been a citadel of freedom and democracy. No to the unilateral and arbitrary termination of the Enrile-Soto accord. Pakiusap lang. Please don’t mess with UP. #DefendUp #UPFight!” 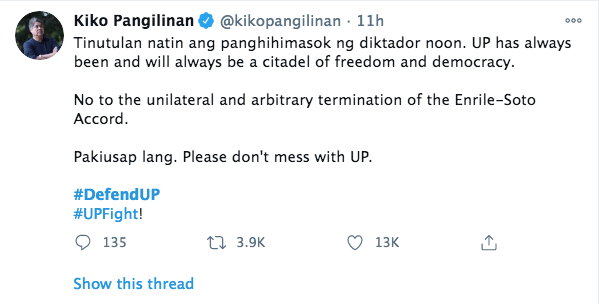 Pangilinan, who was a UP Diliman University Student Council chair, noted in a series of tweets that prior to the UP-DND accord that was signed in 1989, its precursor Enrile-Soto accord of 1981 was in place to diffuse the tension during the nationwide student boycott at the time, where many student activists were jailed.

DND ends deal preventing police and military from entering UP premises. UP responds

In a tweet, Bagong Alyansang Makabayan secretary general Renato Reyes Jr. explained that the UP-DND accord was borne out of “persistent human rights abuses in the conduct of police and military operations inside the campus. We are not speaking of freedom in abstract terms but in concrete, historical terms. Kaya nagkaroon ng kasunduan kasi may umabuso.” 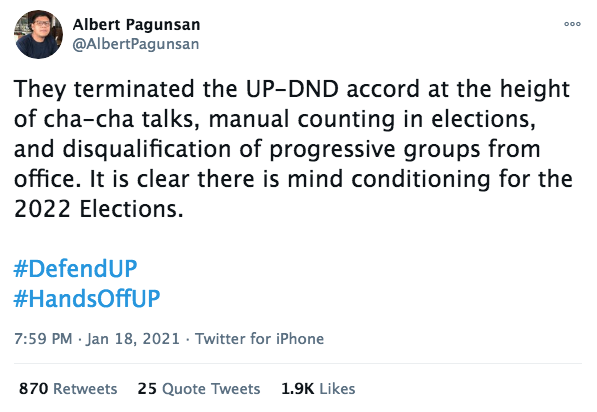 @AlbertPagunsan took notice of the timing of the accord’s termination, including several moves of the government, to which he said “it is clear there is mind conditioning for the 2022 elections.”

Also cited in Lorenzana's letter are allegations that some UP students were members of the Communist Party of the Philippines-New People’s Army (CPP-NPA), which seemingly echo the administration’s stance that the University of the Philippines is a recruitment ground for the CPP/NPA.

@irsondoria took the words of UP Diliman chancellor Fidel Nemenzo to refute the government claims. “Kailanman, hindi itinuturo sa UP and maging aktibista. As what professor Nemenzo has said, ‘In UP, we do not teach our students neutrality. They should look at all sides of an issue but must take a stand when the situation requires a stand.’ #ActivismIsNotTerrorism #DefendUP”

Some Iskos and Iskas also believe that the termination of the accord will shrink safe spaces for protests and dissent.

On Tuesday, Jan. 19, UP president Danilo Concepcion responded to Defense Secretary Lorenzana in a letter, which called to “protect academic freedom.”

Concepcion expressed his “grave concern” about the abrogation, which he said is “unnecessary and unwarranted and may result in worsening rather than improving relations between our institutions, and detract from our common desire for peace, justice, and freedom in our society.”

The UP president also urged Lorenzana to reconsider and revoke the abrogation and request to meet and further discuss concerns the secretary raised.

Concepcion also noted, “We want to maintain UP as a safe haven for all beliefs and forms of democratic expression.”

TAGS: University of the Philippines UP-DND