In his Twitter account, Senator Joel Villanueva proposed that the P19.1-billion budget allocated for the NTF-ELCAC for 2021 be given to Filipinos who have been jobless and hungry due to the pandemic. He noted that people’s money is just going to waste with Parlade’s baseless red-tagging of community pantry organizers.

“Oh my! We should move to defund NTF-ELCAC in the next budget. The people’s money is going to waste (Sayang lang pera ng taong bayan),” said Villanueva. He put a facepalm emoji in his tweet.

Parlade said that the community pantries meant to help the poor are supposedly like the apple that Satan had offered Eve in the Bible creation story.

With the message of getting just enough for your needs, and giving based on one’s ability (kumuha ng sapat lamang sa inyong kailangan, magbigay batay sa makakaya), the community pantries—pioneered in Maguinhawa street—allowed people who have enough to share can leave any item, mostly food, vegetables, canned goods, while people in need can get the food they need for free.

“I agree bro. If these are the kind of people who will spend hard-earned taxpayer's money, then it's not worth it,” tweeted Gatchalian. 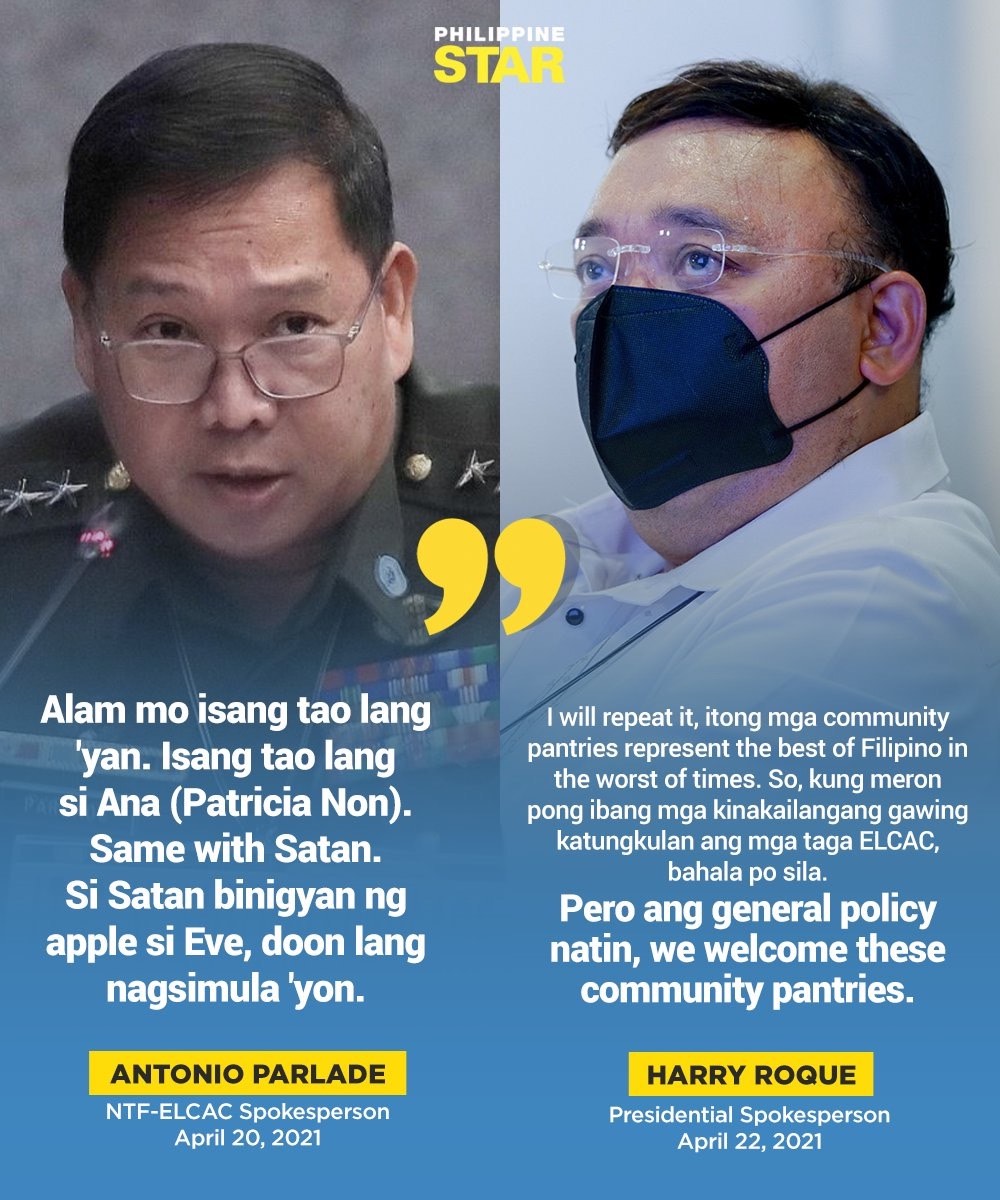 Sen. Francis Pangilinan said “He should remain silent because his baseless and out -of -place words are damaging the image of the AFP as a disciplined and professional institution. If the P19 billion budget of NTF ELCAC goes to such a crooked mindset and policy, it must be withdrawn and given to the aid of the poor.”

Sen. Risa Hontiveros supported her colleagues pushing to defund NTF-ELCAC and filed Proposed Senate Resolution No. 705 calling on the entire chamber to "strongly condemn" the harassment and red-tagging of community pantries.

“They didn’t show they deserved to receive such a huge budget, and if there are already calls in the rest of the Senate to ‘stop funding them, I would gladly support that again,” said Hontiveros in a virtual press conference with Senate reporters.

Sen. Nancy Binay said the NTF-ELCAC budget will go through a fine-toothed comb in the Senate. Binay suggested Parlade might be better in “contact tracing” for Covid-19 than “profiling” as an intelligence officer of the military.

“In just a few months, the Senate will start deliberating on the 2022 budget. Given the unfortunate experiences of red-tagging and baseless intel (intelligence), we will definitely make sure that the NTF-ELCAC budget will go through a fine-toothed comb in the Senate. Since kinakapos nga tayo sa pandemic response, baka mas maigi from ‘profiling’, eh, ‘mag-contact tracing’ na lang for Covid-19 si Gen. Parlade. Mas may pakinabang sya dun,” Binay said.

Sen. Panfilo Lacson said Parlade’s “Satan” remark is totally uncalled for. “As the main sponsor of the budget of the DND and its attached agencies, together with NTF-ELCAC since 2016, I have wholeheartedly defended in plenary their P16.5 billion funding for development projects of CPP-NPA cleared barangays in 2021. This is despite the controversies that most are also made by Parlade's false pronouncements.

A conspiracy of kindness: How we teamed up with strangers to set up the San Roque community pantry

“That being said, in the next budget hearing at plenary debates, I no longer know whether any NTF-ELCAC funds should be recommended to the finance committee. Add to that the DND/AFP leadership's disregard for the Senate Committee on National Defense, Security, Peace and Unification's approved recommendation on the red-tagging issue to remove Parlade as NTF-ELCAC spokesperson not only for blatant violation of Constitution prohibiting active AFP officers from holding civilian position but in the amount of his misinterpretations of the ATA while SOLGEN defended the SC against 37 pending petitions,” Lacson said.

“I would say, enough of this kind of “one-way-street” cooperation,” he added.

Senate Minority Leader Franklin Drilon said “during the debates on the 2021 GAA, I objected to the NTF-ELCAC budget, since it was clearly a lump sum pork barrel of Malacañang disguised as anti-insurgency funds. The Bicam junked my amendment.”

Drilon continued, “For the past weeks, I have been urging the President to realign the anti-insurgency budget to fund the budgeted ‘ayuda” to the poor. I am glad that my colleagues joined me in that call. But we do not have to wait for the 2022 budget debates to defund NTF-ELCAC. The President should realign the NTF-ELCAC under the 2021 GAA now. Now na!! Because, as the saying goes: “A-anhin mo pa ang damo kung patay na any kabayo?” I have filed an anti-red tagging bill, criminalizing and punishing this practice. I urge the Senate leadership to hear this bill as soon as possible.”

Sen. Sonny Angara said “with Parlade’s statements, he is becoming a liability to NTF-ELCAC since he is turning off the legislators who will approve their budget. They might want to be more circumspect and cautious in their future statements as there are consequences. Those who were previously supportive of their work and aims may get turned off.”

“I believe the NTF ELCAC program is good. Defunding it would give back the gains of govt to the rebels. We should not be hasty in blaming a good program because of irresponsible statements from some officials. Replace the officials instead,” Sotto said in a Viber message to Senate reporters.

Palace spokesperson Harry Roque, however, said defunding the NTF-ELCAC is "not justified."

Roque said that the counterinsurgency task force has programs that need funding.

Roque said anew that the President welcomes the emergency of community pantries, but stopped short of condemning or commenting on Parlade's controversial remarks against Ana Patricia Non, the founder of the seminal Maginhawa Community Pantry.

Cecilia is a reporter at the Philippine Star and now covers the Senate. She holds degrees in Master in Communication and Doctor in Public Administration. She is always trying to look at the positive side of things