On June 24, Thursday, sources confirmed that former President Benigno Simeon “Noynoy” Aquino III, the 15th President of the Philippines, has passed away. He was 61.

It was earlier reported that Aquino was brought to the Capitol Medical Center in Quezon City for an undisclosed reason.

The only son of the late former President Corazon Aquino and the late Sen. Benigno Aquino Jr. was elected as President in 2010.

The morning of his passing, even before the news was confirmed by his family, sympathies and tributes started to trickle in social media. Initially, most of them took to social media without naming the former President. Among them is Foreign Affairs Secretary Teddy Locsin Jr., who was former President Cory’s legal counsel and speech writer.

“I’m out of Twitter from grief over the death of a sea-green incorruptible, brave under armed attack, wounded in crossfire, indifferent to power and its trappings, and ruled our country with a puzzling coldness but only he hid his feelings so well it was thought he had one,” wrote Locsin in a series of tweets, including a black-and-white photo of the Cory and Noynoy in Malacañang.

I’m out of Twitter from grief over the death of a sea-green incorruptible, brave under armed attack, wounded in crossfire, indifferent to power and its trappings, and ruled our country with a puzzling coldness but only because he hid his feelings so well it was thought he had

Locsin signed off his tweet, writing, “I beg his sisters to allow me the honor to share their grief. He wasn’t fond of me but I could not bring myself not to admire him.”

Vice President Leni Robredo, a known good friend of the Aquinos also expressed grief with the passing of the former President. “Mabuti siyang kaibigan at tapat na pangulo. He tried to do what was right, even when it was not popular. Tahimik at walang pagod siyang nagtrabaho para makatulong sa marami."

In a statement, Supreme Court Associate Justice Marvic Leonen expressed his sympathies, and described the former President as a “kind man, driven by his passion to serve our people, diligent in his duties, and with an avid consuming curiosity about new knowledge and the world in general.” 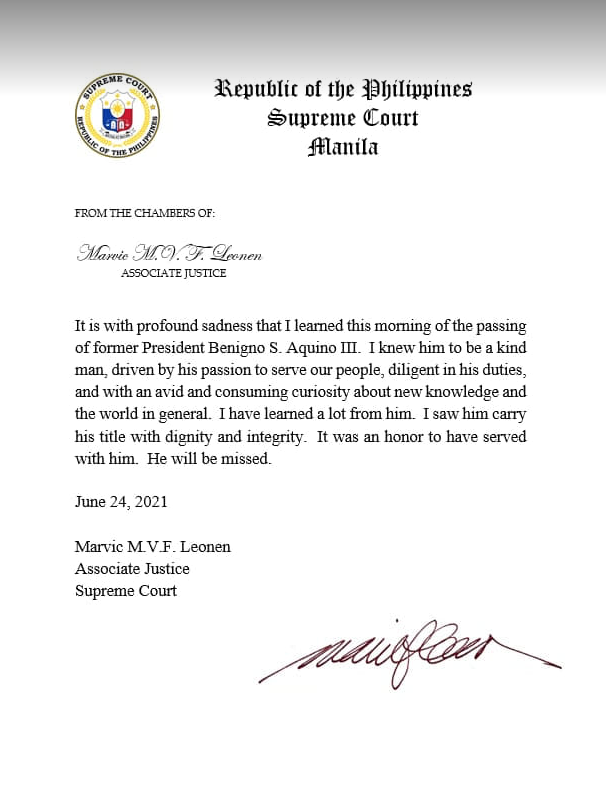 Leonen, who was appointed by Aquino to the high tribunal in 2012, also said, “I learned a lot from him. I saw him carry his title with dignity and integrity. It was an honor to have served with him. He will be missed.”

Noynoy and I may have had political differences during the last few years of his term, but that will not diminish the many years of friendship between our families.

My deepest condolences to the family. Godspeed, Pareng Noy.

Former Vice President Jejomar Binay sent his condolences to the Aquino family in a tweet. He acknowledged both of their political differences and said, “but that will not diminish the many years of friendship between our families.”

I am deeply saddened to hear about the sudden passing of former President Noynoy Aquino. Thank you for your firm leadership, hard work & integrity. More than these attributes, I will remember him as a kind, thoughtful childhood friend. RIP, PNoy. Prayers for the Aquino family??

Mar Roxas, who was seen at the Capitol Medical Center this morning following the news that PNoy was rushed to the hospital, penned a message for his friend and ally. “You did all that you could and left things so much better than how you found them. Our country moved up and was respected all over the world. It’s all anyone can ask,” Roxas wrote.

“We are proud of you as would be your mom and dad. Damo gid nga salamat. Halong. We miss you already,” he concluded.

Quezon City Mayor Joy Belmonte remembers PNoy as a “remarkable public servant who devoted his life to pursue and uphold what he called ‘Daang Matuwid’.” Belmonte also highlighted the former President’s achievements, especially in strengthening the country’s economy during his term.

“Whether on the public stage or away from the cameras, PNoy’s passion for shared progress and his sincere desire for a better Philippines was evident. More importantly, he did his very best to translate this vision into action,” said Belmonte, whose late mother and STAR founding chairman Betty Go-Belmonte was a great friend of PNoy's mother, Cory.

PNoy’s former deputy presidential spokesperson Abigail Valte expressed her grief, which she shares with the late former President’s staff, past and present. “We are trying to hold each other up through our collective grief, sliding into our old roles to help however we can. We will be here, Mr. President, even for this one last time,” Valte tweeted.

Singer and vocal supporter of the Aquino administration Jim Paredes tweeted, “A friend I greatly admired has passed on. It is shattering. I give you my fervent, respectful salute for all you have done.” After the news was confirmed, he posted a photo of a yellow ribbon, which has become a symbol of the Aquino legacy since the ‘80s.

Lawyer Chel Diokno, whose senatorial bid in 2018 was endorsed by Aquino also paid tribute on Twitter. Both of their fathers, Ninoy Aquino and Jose Diokno were detained in Laur, Nueva Ecija during martial law.

“Salamat at paalam, PNoy. I remember how you stayed for more than an hour at mom’s wake, reminiscing about our dads’ imprisonment. How in private moments, you would often talk about our parents, and their detention in Laur. You left us too soon.”

Salamat at paalam, PNoy. I remember how you stayed for more than an hour at Mom’s wake, reminiscing about our dads’ imprisonment. How, in private moments, you would often talk about our parents, and their detention in Laur. You left us too soon.

Diokno added, “You served our country well, uplifted the lives of many Filipinos, and gave us a reason to dream of a better future. Rest In Peace and enjoy heavenly bliss, which you richly deserve.”

Former Presidential Spokesperson during PNoy’s administration said the former President had “governed our country with honest leadership, decency and civility.”

“History will judge his governance with favor but for now, he belongs to the gaes. Paalam, Mr. President,” Lacierda wrote.

Sen. Joel Villanueva also mourned the passing of PNoy, who said the former President was a friend, a mentor and a brother to him, and called him a “TESDA Godfather.”

“He believed in the great talents of our youth, waiting to be unlocked if given the good training, right breaks, and inspiring success stories. By ordering that they be trained, he invested in their dreams,” Villanueva said.

Below are some of PNoy's friends and allies who have sent their tributes and sympathies:

I have been shedding tears since I first tweeted. The Aquinos and Tañada families will forever be intertwined from the time of PNoy’s grandfather to Sen Ninoy to Pres Cory and to PNoy. We marched together. We served together in the House before he became a Senator.

This insightful reminder that sovereignty resides with the people and public accountability is owed to them is what I will remember of #PNoy. He wasn't perfect, no one is; but he clearly loved this country and served it as best he could; everything beyond that was pure gift. pic.twitter.com/VtbTLdccTO

As the leader of our nation, we knew him as "PNoy." He championed good governance reforms that promoted efficiency and reduced opportunities for corruption. The Philippines was cited as the fastest-growing economy in Asia during his administration.

My sincerest condolences to the family and loved ones of former President Noynoy Aquino. You will be missed my friend… rest in peace… ???

(This is a developing story)