In 2019, President Donald Trump tweeted 17-year-old Swedish climate and environmental activist Greta Thunberg that she needs to “work on her anger management issues” and “chill.” Today, she used the same words for him in a scalding tweet.

Waiting for the results of the US Presidential election keeps a lot of Americans (and most of the world) on edge. As of this writing, former Vice President Joe Biden is ahead in electoral votes, and President Trump is evidently not too thrilled about it.

A disgruntled Trump faced the media in the White House briefing room and claimed election fraud as the votes are still continuously being tallied in several states including Pennsylvania, Nevada and Georgia.

Prior to his appearance to the media, Trump was sending out tweets the whole day (a couple of which were flagged by Twitter as “might be misleading about an election or other civic process”), including one that said “STOP THE COUNT!”, a narrative that he has been painting since a significant number of votes that came in after election night were not in his favor.

So ridiculous. Donald must work on his Anger Management problem, then go to a good old fashioned movie with a friend! Chill Donald, Chill! https://t.co/4RNVBqRYBA

Then came the tweet of Greta Thunberg, a known critic of Trump for his stance on climate change, whose name trended on Twitter alongside other US election-related topics.

So ridiculous. Greta must work on her Anger Management problem, then go to a good old fashioned movie with a friend! Chill Greta, Chill! https://t.co/M8ZtS8okzE

Thunberg is currently in her hometown Stockholm, Sweden as she tweeted to Trump the exact words he used to take a jab at her in a tweet when she was named Time magazine’s Person of the Year in 2019. 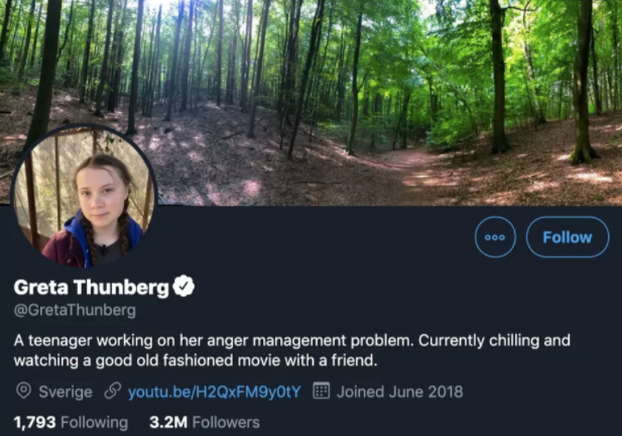 Thunberg had also previously clapped back at Trump’s message for her and briefly changed her Twitter bio to “A teenager working on her anger management problem. Currently chilling and watching a good old fashioned movie with a friend.”

Even though the COVID-19 pandemic is in our midst, Greta conducts her #SchoolStrike4Climate (most of the time online), which has been ongoing for 116 weeks and counting.

As people anxiously await the election results, they turned to Greta’s tweet as a breath of fresh air, some even declaring it the “Tweet of the Day.”

It's the ultimate burn from Greta

Greta held onto this for 11 MONTHS and dropped an absolute precision missile strike. pic.twitter.com/0MxnWSNKZ3