Revenge travel mode is on and if it’s a flight to a breathtaking island or a chill hotel staycation, you're looking for in the last quarter of the year, we've got you covered.

Up for a beach getaway? Get discounted stays at top hotels around the country this September

Looking forward to your next getaway? PhilSTAR L!fe has rounded up a few good travel deals for 9.9 that we think might fit your desired itinerary.

Don’t have a destination in mind for your September getaway yet? Don’t miss Cebu Pacific’s 9.9 promo for a one-way base fare on select domestic destinations like Cebu, Bohol, Dumaguete and Zamboanga. With the seat sale ending on September 15, you can book a flight for as low as P88 and travel until February 28, 2023.

Cebu Pacific also has a brand new 9.9 sale for both domestic and international flights right in time for the Christmas season! From 10:00 a.m. on September 9, until September 13, 2022, CEB is gifting everyJuan with a SUPER early seat sale to allow them to plot ahead next year’s summer vacation plans. 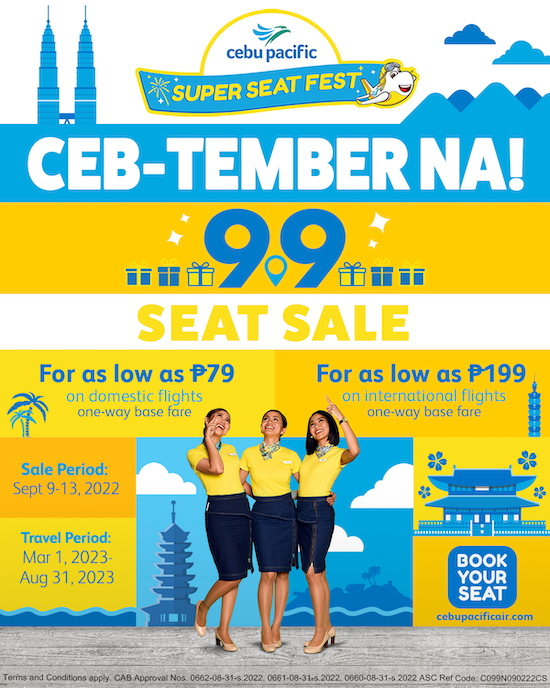 For those who are already members of AirAsia, the airline company is bringing all the necessary getaway needs to the table with their new 9.9 promos offering one-way base fares. From as low as P99, you will be able to travel to select destinations around the Philippines like Cebu and Puerto Princesa in Palawan. You can even score tickets to Seoul, South Korea for as low as P1,399!

The promo began on September 5 and will end on September 11. If you intend to catch up on the sale, you can make your booking through their website and also find a special discount code for local hotels. The travel period for the early ber-month deal will end on March 25, 2023.

Been dreaming of catching some vitamin sea from Siargao? Sunlight Air just announced its promo fare for those who want to travel between Manila and Siargao. With the price starting from P 2,088, be sure to grab a limited-time seat by booking on the airline’s official website. The sale period began on September 5 and will end on October 5, while the travel period is set to end on December 26, 2022.

Not ready to embark on flights yet? Agoda is also offering promos for those who want to relax and unwind with a well-deserved hotel staycation this September.

Agoda’s 9.9 Mega Sale offers a selection of discounted hotel stays from Manila, Cebu, Palawan, and other cities around the Philippines. The promo period began on September 2 and will end on September 15. You can make the most of their exclusive travel deals and discounts by booking on their app or heading over to their website.

While it's not exactly a 9.9 sale, PAL is currently offering its Supersavers promo for those who intend to fly over to their dream destination. For a one-way base fare that can go as low as P498, the 3-in-1 promo offers unlimited rebooking, in-flight snacks or meals, and the ability to choose your own standard seat. The booking period will be open until December 15, with the promo available for 30 days ahead of travel up until June 30, 2023.

Looking for a tipid trip this September? Traveloka just announced their 9.9 sale which lets you book discounted flights, hotels, and other services depending on your getaway desires. From September 9 to 11, you can get up to P1,999 off on your flight, P1,900 off on hotel stays, and P900 off on spas and tours. Once you have successfully booked a flight with PAL using Traveloka’s app, you will receive a hotel discount voucher code which can be claimed through their app’s MyRewards section.

If you don’t want to miss out on Traveloka’s limited-time deal, you can head to their website or download their official app to catch up with the promotion period!

Arielle is a journalism student whose survival kit involves caffeine and lo-fi music. She likes to write about games, movies, and pop culture.

Rabiya Mateo gets emotional over finally buying a house for her family in Iloilo: 'Sobrang sarap sa feeling'