Twitter and its pithy character format for messages shared across social media have produced some pearls that have at times had a global impact.

Here's a collection of the most notable:

Astronaut Mike Massimino (@astro_mike) sent the first tweet from space in May 2009.

Prince William and Kate Middleton told the world in November 2010 they were getting married via the royal account @ClarenceHouse:

"The Prince of Wales is delighted to announce the engagement of Prince William to Miss Catherine Middleton."

The wedding took place in April 2011.

IT consultant Sohaib Athar unwittingly revealed the US-led raid in May 2011 that would kill Osama Bin Laden was taking place.

"Helicopter hovering above Abbottabad at 1AM (is a rare event)" he wrote on @ReallyVirtual. 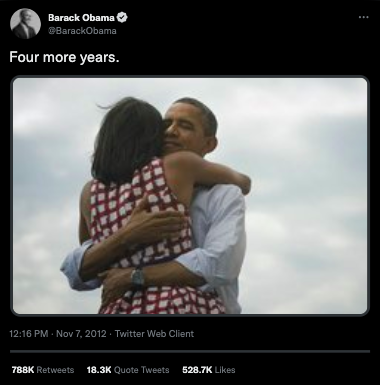 US President Barack Obama announced his election victory in November 2012 along with a picture of him and his wife, Michelle, hugging.

The US Central Intelligence Agency launched its account @cia in June 2014 with a note of irony.

After the jihadist attack in Paris on the magazine Charlie Hebdo in January 2015, graphic designer Joachim Roncin (@joachimroncin) devised a slogan, "Je Suis Charlie" (I am Charlie), in white capital letters on a black background that he placed on Twitter.

Accompanied by #JeSuisCharlie, within hours it was picked up around France and beyond, becoming the totem of solidarity rallies.

If you’ve been sexually harassed or assaulted write ‘me too’ as a reply to this tweet. pic.twitter.com/k2oeCiUf9n

American actress Alyssa Milano called via her Twitter account @Alyssa_Milano in October 2017 on women who had been sexually harassed to speak out.

"If you’ve been sexually harassed or assaulted write ‘me too’ as a reply to this tweet" she wrote, sparking what became the #MeToo movement against such abuse.

Via @realDonaldTrump, the former US president showered his 88 million followers with tweets during his 2017-2021 presidency.

One of his most spectacular targeted the nuclear threat posed by North Korea under Kim Jong-un:

"Will someone from his depleted and food starved regime please inform him that I too have a Nuclear Button, but it is a much bigger & more powerful one than his, and my Button works!"

"To all of those who have asked, I will not be going to the Inauguration on January 20th," his last tweet read.

A tweet on @chadwickboseman in August 2020 announced the death of 43-year-old US actor Chadwick Boseman, the first black superhero to get his own standalone film in the Marvel franchise Black Panther.

The tweet quickly became and remains the most "liked" in the history of the platform.