The issue of anti-Asian violence in the United States has resounded across the globe and sparked the #StopAsianHate movement that made people, including A-list celebrities, say “enough is enough.”

But just two weeks after the horrific shooting in Atlanta massage parlors that killed eight women, six of whom were of Asian descent, a shocking CCTV footage made rounds on social media where a 65-year-old Filipino was violently beaten in broad daylight in New York City, as onlookers did nothing to help.

The woman, identified as Vilma Kari, was repeatedly kicked and stomped on by a man who reportedly hurled expletives at her and said, “You don’t belong here.” The man just casually walked away after. The bystanders in the building, who witnessed the attack, just closed the door on the beaten up Kari as she was trying to get up.

The victim is reportedly still in the hospital and the New York police has reportedly launched a hate crime investigation because of the incident.

The recent attacks that reek of hate for people of Asian descent prompted celebrities to speak up and not just merely “react” on the matter.

In a tweet, singer Lea Salonga said the scene where the attack happened is near the Broadway theaters. She recalled that her mother, Ligaya, used to walk in that area going to church on her own.

“My mom would walk to church on her own, feeling totally safe in the city, and I never had to worry about her. I guess those days are over.”

This is the suspect. I hope he’s caught and brought to justice. #StopAsianHate #StopAAPIHate https://t.co/JIfzx2qkYd

In another tweet, Lea retweeted photos of the suspect from the NYPD and said, “This is the suspect. I hope he’s caught and brought to justice.”

KC Concepcion penned a message on her Instagram Stories that speaks of the recent attacks that also affect Filipinos. “You think Asian hate in America solely revolves around the Chinese community? Think again—apparently Filipinos are also under fire, and for no valid reason at all!” 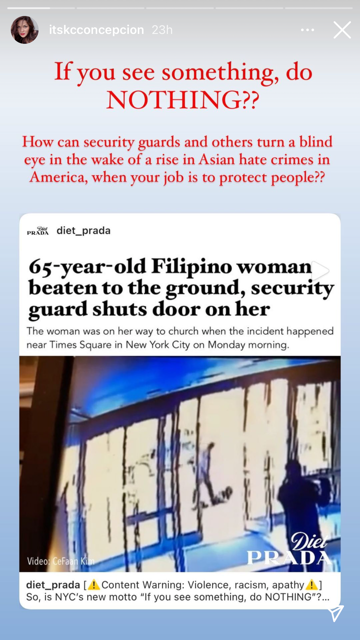 In another post, KC posted a screenshot of a post by @diet_prada and expressed her frustration with the onlookers who did not extend help to the woman who was attacked. “If you see nothing, do nothing?? How can security guards and others turn a blind eye in the wake of a rise in Asian hate crimes in America, when your job is to protect people??”

Meanwhile, Isabelle Daza also posted on her Instagram Stories that what happened to Vilma Kari is not okay.

“Umm, this is not ok. Who is this awful man who just beat up a senior citizen. Also the guard who closed the door didn’t help,” she said.

In the wake of seemingly unending racist attacks towards Asians, which some Filipino-Americans have also been affected, celebrities of Filipino descent have also made their voices heard on social media.

Actor, singer and Glee star Darren Criss tweeted about the attacks in Atlanta and believe that those who perpetrate the attacks do not represent America. “It is up to the very majority to show our strength, defiance, and resilience against these monsters. They are a dying breed of scarred, confused, and angry people. And we have to make them understand there is no place for hatred in any world that seeks peace.”

Apl.de.ap posted on Instagram an artwork that says, “I am not your scapegoat,” which was a part of a public campaign on subways in Brooklyn that calls out the rising anti-Asian racism since the pandemic happened.

Theater actor and Ratched star Jon Jon Briones has been vocal about his stance on the anti-Asian violence in the US. He tweeted that over the past year, 3,800 hate crimes against Asians were reported in the United States, 68% of those were against women.

Together with other Fil-Am Hollywood actors Paolo Montalban and Vince Rodriguez III, Briones joined the #StopAsianHate Virtual National Day of Healing that called to action that Asian hate must stop. Other personalities joined the movement, where they read the plight of people of Asian descent, who have experienced anti-Asian hate crimes.

Watch their videos below:

Over the past year more than 3,800 hate crimes against Asians were reported. 68% were against women. We must #StopAsianHate. RT and go to https://t.co/lFXiGDyqPX for more info. #StopAAPIHate #HateIsAVirus #326DayofAction #UnitedWeStand pic.twitter.com/jRHtdmXvMH

Today, March 26, is the National Day of Action & Healing to #StopAsianHate

The recent tragic shooting in Atlanta should be a wake-up call for all of us. We can no longer stay silent. There have been more than 3,800 Anti-Asian hate crimes reported since the pandemic... pic.twitter.com/9kOwpKCzwn

Over the past year more than 3,800 hate crimes against Asians were reported. 68% were against women. We must #StopAsianHate. RT and go to https://t.co/gQ3FpMIFl3 for info.#StopAAPIHate #HateIsAVirus #326DayofAction #UnitedWeStand pic.twitter.com/F5J9SQV6Vj

It’s perfectly okay to not be okay in the workplace

LDR is more than just romance: How I deal with friendship loneliness

Asking for a Friend

'I’m unhappy at work but I'm the family breadwinner so I can’t just quit my job. What do I do?’