Before the collective Filipino joy at Hidilyn Diaz’s record-breaking weightlifting achievement, the Tokyo 2020 Olympics had to overcome a cloud of controversies — whether it was the scorching heat, an outbreak of COVID cases, concerns over athletes unsafely gettin’ it on (leading to Olympic officials passing out condoms and installing cardboard beds — not ideal for hanky-panky). All this before the Olympics even got underway.

Thankfully, one of the highlights of the Opening Ceremony was a live routine that turned into a viral video — something spreading pure fun at an event some people were unsure should even be taking place.

Soon, it explodes into a human pictogram display, running through all 50 events in live, rapid succession.

Leave it to Japanese designers. The pictogram trend started, most agree, with the Tokyo 1964 games. According to Markus Osterwalder, secretary general of the International Society of Olympic Historians, “The Japanese were faced with the problem of language. Nobody speaks Japanese outside Japan, so they really had to find something that would work for all the people from other countries. A non-verbal system.” 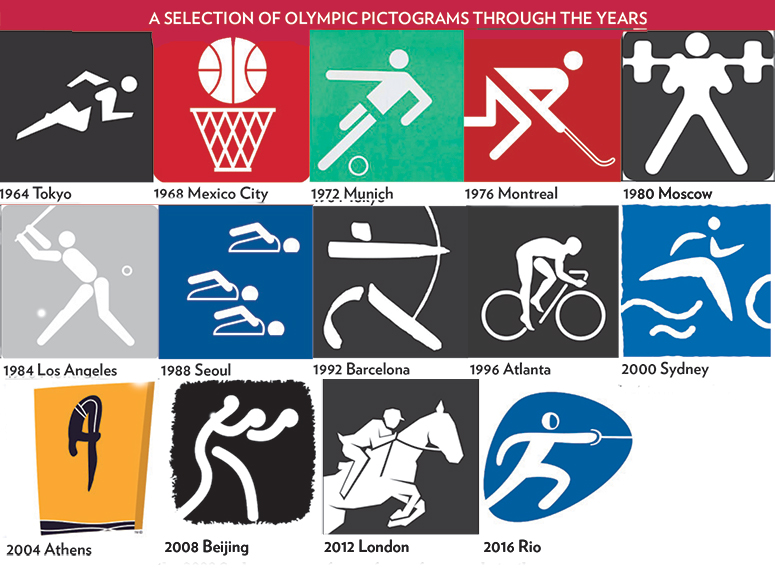 Like early forms of the emoji, the Olympic pictograms render human action as a kind of kinetic silhouette, a stylized form that’s instantly recognizable, conveying movement. Since then, Olympic pictograms have grown from signaling basic running and jumping to this year’s games, which now stretch to include skateboarding, surfing, wall climbing, and BMX freestyle biking.

The Japanese had the most elegant design solution in 1964: “They invented a very simple new language, and a totally new form of graphic design using sports photography for the first time, and consistent typography as a graphic element,” Osterwalder writes in the Olympics.com article “The Olympic Pictograms: A Long and Fascinating Story.”

(Another added bonus: thanks to the tenacious 1964 Tokyo designers, we now have universal pictograms for men’s and women’s toilets, something we can all instantly recognize today.)

Simple, yet mind-bogglingly precise, the human pictograms of Tokyo 2020 show a spirit that, just maybe, helped lift the initial clouds of anxiety over the summer games, and helped release some collective joy and laughter.

Soon, pictograms became a special challenge for each succeeding Olympics: how to assert a host country’s unique identity, even through basic stick figures.

An early shift came with Mexico City’s 1968 games, which adopted a colorful pre-Hispanic (almost Aztec) pictogram style. By the ‘90s, countries had begun incorporating their own national and indigenous history into pictograms, telling stories through images: for the Lillehammer 1994 games, shapes were based on cave paintings of pre-Norwegian skiers from 4,000 years ago; and the 2000 Sydney games featured abstract figures based entirely on the boomerang shape.

Artwise, you could say the pictograms have grown ever more kinetic over the last half century — the basketball player is no longer tentatively dribbling; he (or she) is slam-dunking. The fencing now includes a wicked lunge, not just a defensive parry. And the volleyball pictogram now has shifted from a two-handed return to a killer overhead serve. Just the evolution of sports, I guess. 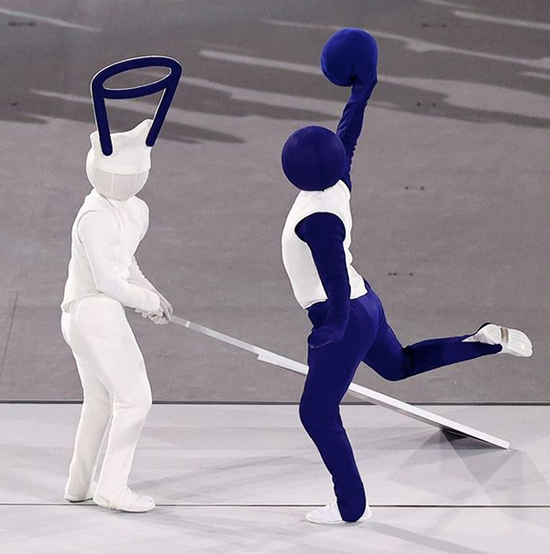 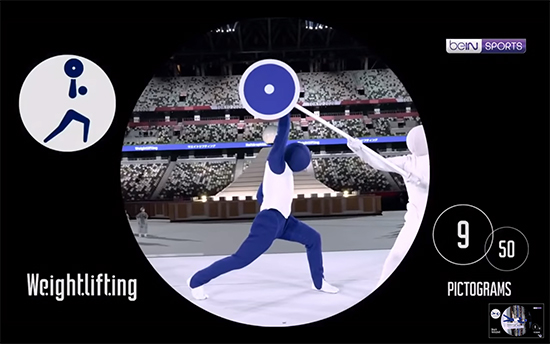 So the bar was set high for Tokyo in this year’s games. Maybe their pictogram designers just wanted to circle back to that 1964 moment of creation; maybe they felt like breaking out of the box.

Whatever the inspiration, the program brought pictograms to vivid life during the Opening Ceremony when a well-trained team of performers (and helpful prop masters) acted out each Olympic pictogram — in perfect, synchronized form, from each to the next, freeze-framing for a side-by-side overlap with the pictogram. It’s a priceless Olympic moment, and well worth several viewings to catch all the innovative adjustments using props, fingers, and a color palette revolving around white and blue.

Kind of like the Blue Man Group gone Olympic freestyle, it’s set to a bass-plucking club soundtrack, reimagining all 50 event pictograms in a marathon relay display that’s dazzling and, yes, athletic to watch.

Simple, yet mind-bogglingly precise, the human pictograms of Tokyo 2020 show a spirit that, just maybe, helped lift the initial clouds of anxiety over the summer games (delayed from last year, you will recall, thanks to COVID), and helped release some collective joy and laughter.

Scott Garceau is desk editor and Lifestyle columnist (The X-Pat Files) for The Philippine STAR. He also paints, writes imaginary novels, and plays guitar and sings alongside his spouse in the alt-pop band, The Garceaus.

'Shot puno': 'Gin bilog' given as souvenir in baptism reception in Rizal

How these entrepreneurs grew their business through TikTok Shop