Nas Academy, the online learning platform from vlogger Nuseir Yassin or Nas Daily, has disputed claims that Kalinga tattoo legend Whang-Od did not consent to the "Whang-Od Academy" course under their platform.

In a social media post, the platform shared a video of the 104-year-old artist signing the supposed contract with her thumbprint. Nas Academy shared that their team approached Whang-Od and her family in Kalinga "to share her culture for future generations."

"So we pitched her family the idea of creating Whang-Od Academy. Her and her family present both loved this idea, and have worked WITH US to build it, with Whang-Od teaching herself," they furthered.

"As a matter of fact, Whang-Od’s trusted niece, Estella Palangdao, was present and translated the content of the contract prior to Whang-Od affixing her thumbprint, signifying her full consent to the project."

"This is the clearest evidence that it is not a scam and achieved the consent of her and her immediate family."

They said that "Everybody was compensated for their time, and for every sale the Whang-Od Academy generates, most of it went directly to her and her family. We just provided the technology and the marketing."

They explained that they took down the class offering off their site out of respect for the family and to handle the matter internally. 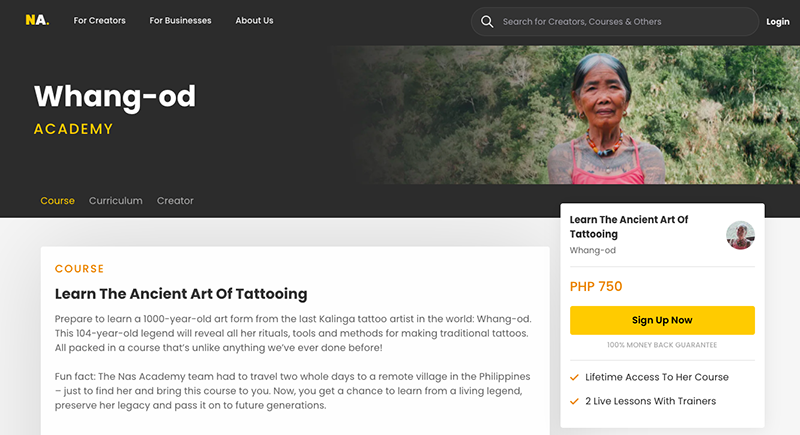 "NCIP-CAR is made aware of the issue surrounding our revered mababatok Apo Whang-od and a certain blogger. Rest assured that appropriate intervention is initiated," he shared via Facebook post.

"We do really welcome endeavors to promote, protect, and advocate our cultures and their ancestral bearers. However, attempts to monetize without consent, diminish, and demean such practices and even its Peoples, will be dealt with harshly by appropriate penal laws."

He said that despite Nas Academy's contract signing footage, the NCIP will still further investigate the matter.

"Bandying on social media a contract is not a proof of compliance. The NCIP will make our review and onsite validation and interview, whether the Free, Prior, and Informed Consent process should have them implemented on this incident."

The backlash began when Whang-Od's grandniece and protegee Grace Palicas called the project a "scam" yesterday, Aug. 4. She mentioned that the tattoo artist was not made aware of a contract and for people to "stop disrespecting the legacy of Apo Whang Od and the Butbot Tribe."

She also expressed concerns in a separate recently-deleted post that people may be profiting of the Buscalan village's art and culture.

Meanwhile, Nas Academy was introduced earlier this year with a variety of classes helmed by famous names such as Jessica Soho, Erwan Heussaff, Catriona Gray, and Michael Cinco.

The Whang-Od Academy promised that the class "will reveal all of [Whang-Od's] rituals, tools, and methods for making traditional tattoos" for a sign-up fee P750.

Japanese man given $360,000 of COVID aid by mistake arrested

Rainy season is here, according to Pagasa