Only three words for my epitaph: Writer. Book lover.

I was six or seven, thereabouts, when I started tinkering with this technological marvel they call a paperback. The addiction caught on when I was about 10. Since then, not a day goes by without a book in my hands.

I’m so crazy about books that, if by some freak happenstance I’m forced to choose between a government official and a signed first edition of Alexandre Dumas’ Le Comte de Monte Cristo, while trying to escape a sinking ship, I’d go and save The Count. Officials have access to jet skis anyway.

The recent banning of so-called “subversive” books made me wonder: have we reached rock bottom?

By the force of a single memorandum, the Commission on Higher Education-Cordillera Administrative Region (CHED-CAR) Regional Memorandum No. 113, s. 2021, the Kalinga State University and the Isabela State University moved to eliminate “subversive” books and other leftist materials from their library. 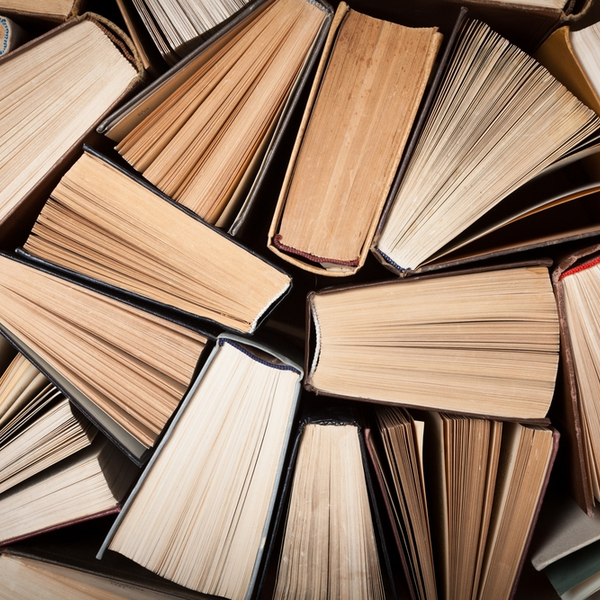 The said memo, dated Oct. 21, 2021, says in unambiguous language: “(1) In support [emphasis, mine] of Executive Order No. 70 series of 2018 “Institutionalizing the Whole of Nation Approach in Attaining Inclusive and Sustainable Peace, Creating the Task Force to End Communist Armed Conflict” and in Cognizance to the 3rd Quarter Cordillera RTF-ELCAC meeting held on September 22, 2021, all Higher Education Institutions in Cordillera Administrative Region are encouraged [emphasis, mine] to join the region-wide removal of subversive materials both in libraries and online platforms."

If you’re wondering what in Dracula’s castle is an Executive Order, here it is: “Acts of the President providing for rules of a general or permanent character in implementation or execution of constitutional or statutory powers shall be promulgated in executive orders” based on the definition by Administrative Code of 1987, Book III, Chapter 2, Section 2.

Books to help us cope during this badly-handled quarantine

Anyone with a smidgin of understanding of English knows that the tone and intent of the memorandum are unequivocal: there is an ongoing regionwide effort to remove such subversive books and materials from libraries and online platforms, and that to swerve from such an instruction coming from the RTF-ELCAC through CHED-CAR’s memorandum would mean that your university is in complete opposition to Executive Order No. 70.

The use of the phrase “In support” and “shall,” the latter being an expression of strong assertion and intention, caps the memorandum as instruction rather than the simple sharing of information which the agencies have agreed upon.

Yet, after being called out by netizens online, the Cordillera agency of CHED insists in its second memorandum dated Nov. 8, 2021 that it had neither instructed nor encouraged the said banning of books.

This is the worst example of damage control, to say nothing of a botched reading comprehension.

“This office clarifies that the Memorandum issued does not compel order [sic] nor encourage [emphasis, mine] Higher Education Institutions to remove subversive materials in their library or in any other online information services. Rather, the said memorandum merely informs Higher Education Institutions that in a meeting of the RTF-ELCAC held on September 22, 2021, it was agreed upon by the member-agencies to encourage [emphasis, mine] HEIs to remove so-called subversive materials in their libraries.”

Read that again. This time, I suggest you pop a Prozac because this is the worst example of damage control, to say nothing of a botched reading comprehension, that I’ve ever encountered in years. 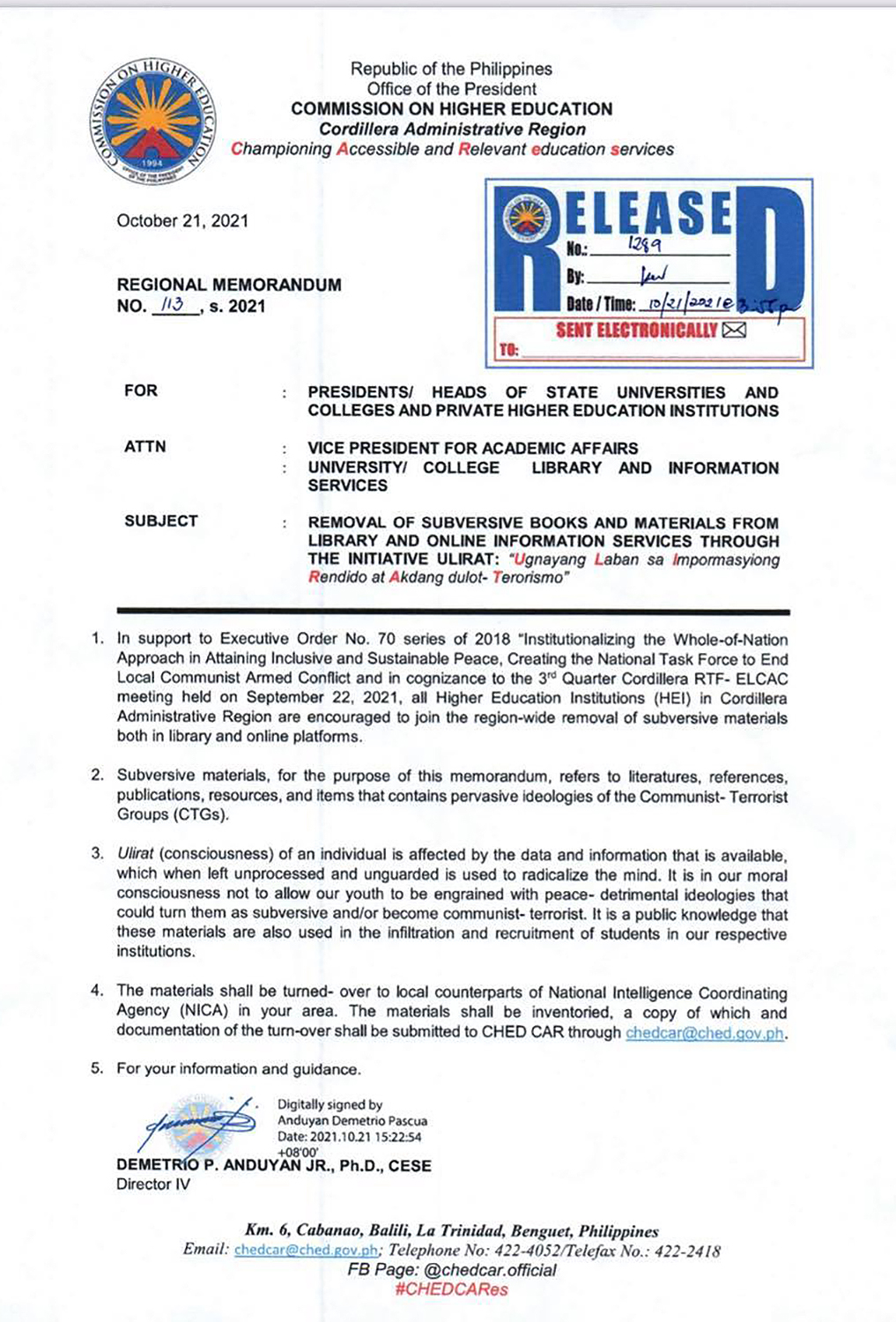 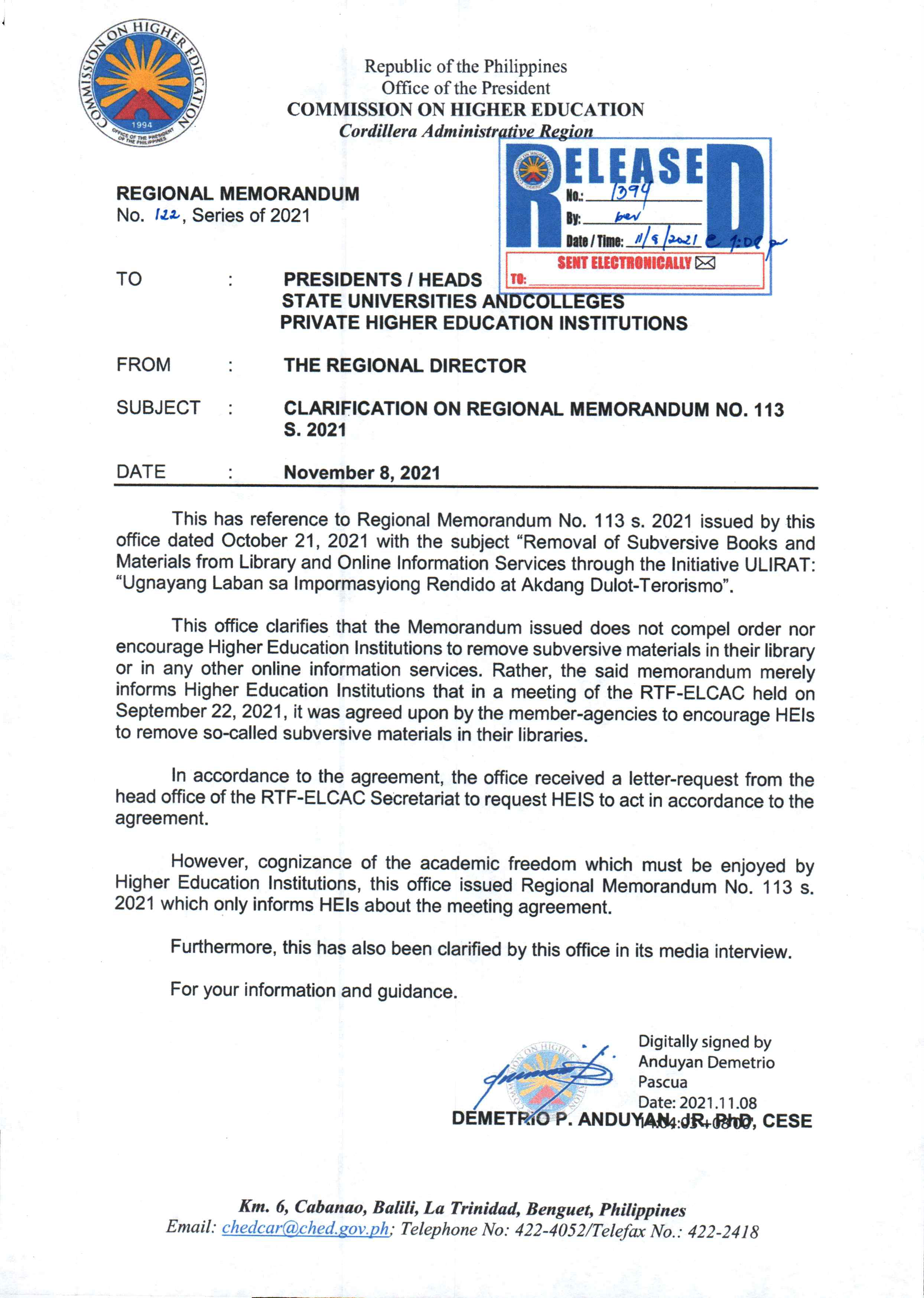 Three things I’d like to raise: first, I strongly doubt if any of those who decided to ban “subversive” books had read the same. Worse, I don’t see the logic of choosing to ban these books without comprehending any of them to begin with.

I mean, if these people fail to make sense in their own memoranda, how can they grapple with the intricate logic found in the materialist interpretation of history found in Marxism? Groucho Marx would be extremely displeased.

Are these agencies suggesting that they have the reading comprehension of a rock?

Second, damage control should not in any way, shape or form disavow one’s very own words. It’s no different from hitting yourself with a blunt object. You may explain it further, maybe even choose to skirt around it at your own risk, but not incriminate yourself by denying outright what you’ve just put on paper.

Somewhere in the vast boondocks of the internet, a copy of said document will pop up. Are these agencies suggesting that they have the reading comprehension of a rock?

In a country stripped largely of poise and pride as ours, books are veritable luxuries. Poverty, injustice, state atrocities, police brutality, militarization, impunity: these are the proselytizers of resistance, not books per se.

What better way to spark dissent than to rule as a corrupt, self-indulgent, shameless, devil-may-care dictator with Ninja Turtles for a fashion sense. You may throw in “ugly” to complete the ad hominem.

Allow me to let you in on the oldest trick in the book: banning books is the best way to raise them to the category of bestsellers. The more they are deemed immoral, decadent, downright wicked, or saccharine-ly innocent, the more they are likely to be bought and read.

Transgressive literature is sumptuous literature. Think cakes: the sinful, the better. If that ain’t true, chefs would not have invented the triple decker Pistachio Sansrival or the Mango Bravo.

I have often said to young professionals everywhere to never—not now or anytime in the future—have sex with anyone who deliberately refuse to read.

They’re not only a stain in the human gene pool, you don’t want to grow old with someone too brain-sloppy to comprehend anything you say. Alzheimer’s and dementia are bad enough as they are without you having to add to them. Besides, I simply don’t want you to turn into murderers.

As for those who ban books, we might as well book ‘em.