Parler, the social networking app popular with far-right conservatives in the US, was first warned by Google and Apple last week to better police its users if it wants to remain on their app stores.

Both have since removed Parler from their stores. This means no new user can download the app but existing ones can continue using it.

Apple sent Parler a letter on Jan. 10 saying, “Parler has not taken adequate measures to address the proliferation of these threats to people’s safety. We have suspended Parler from the App Store until they resolve these issues.”

US President Donald Trump was kicked out of Twitter permanently on Jan. 9, following his incitement of the US Capitol riots which resulted in five people dead. Facebook and Instagram last week suspended his account until Jan. 20, when he leaves office and President-elect Joe Biden is inaugurated, but the platforms may extend this ban indefinitely.

Left out of the most popular social media platforms, where will Trump go?

As of Jan. 10, Trump is left with very few choices as online platforms have either banned or restricted him, as well as Trump content, and his organization’s merchandise.

Tiktok. Trump does not have a personal Tiktok account. If he did, that would be so hilarious since he repeatedly threatened and tried to ban the app in the US last year. On Jan. 7, TikTok said it would remove videos of Trump's speeches that incited the US Capitol riots.

Reddit. Reddit has banned the subreddit group “r/DonaldTrump,” according to Axios. A spokesperson said that Reddit’s policies “prohibit content that promotes hate, or encourages, glorifies, incites, or calls for violence against groups of people or individuals. We have also taken action to ban the community r/donaldtrump given repeated policy violations in recent days regarding the violence at the US Capitol.”

Snapchat. A spokesperson confirmed that the app has locked Trump’s account, which has nearly two million followers.

Shopify. The online shopping platform removed two online stores affiliated with Trump, which sell his organization and campaign's merchandise, for violating policies on supporting violence. “Shopify does not tolerate actions that invite violence. Based on recent events, we have determined that the actions by President Donald J. Trump violate our Acceptable Use Policy, which prohibits promotion or support of organizations, platforms or people that threaten or condone violence to further a cause. As a result, we have terminated stores affiliated with President Trump," The Financial Times reported. 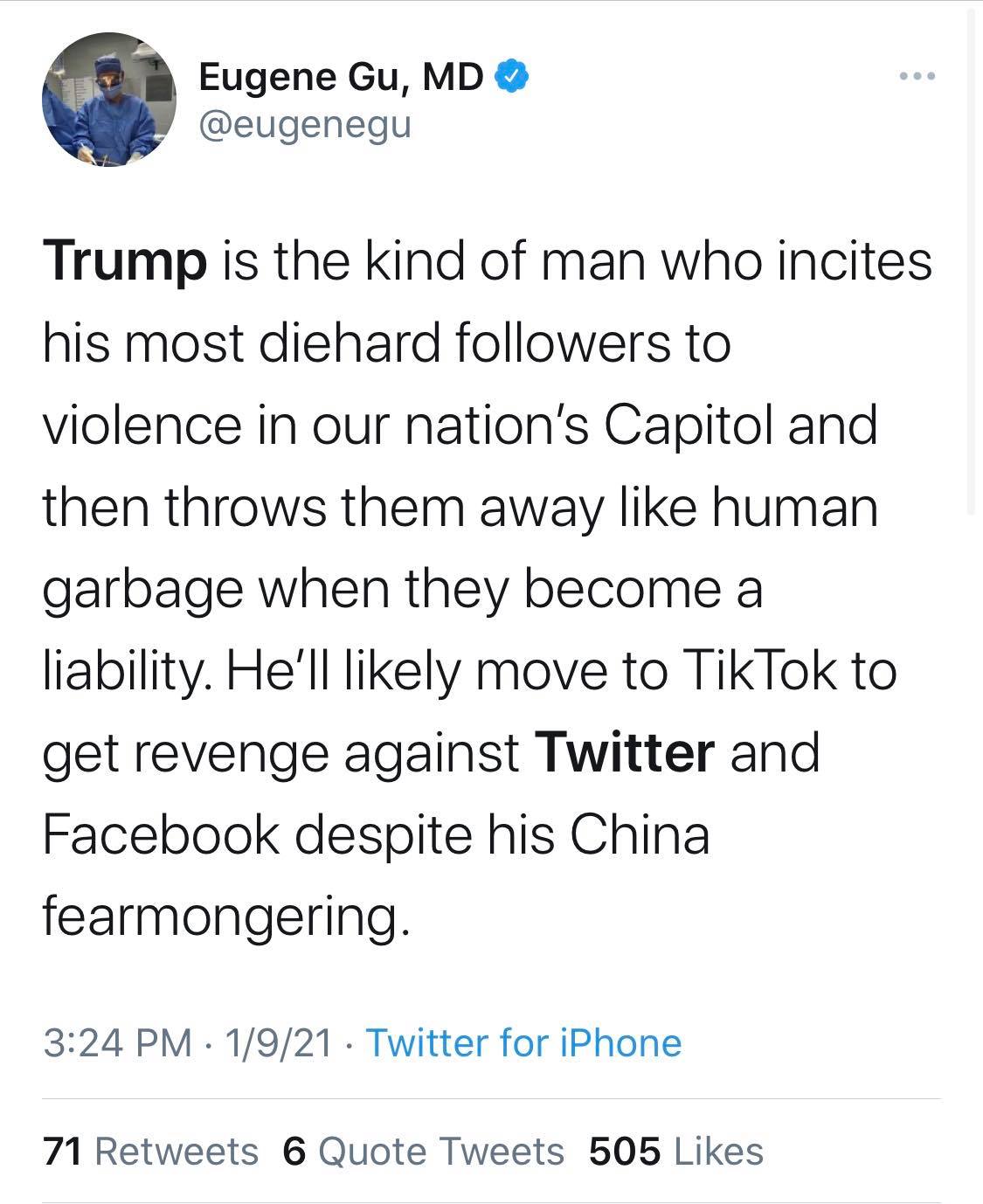 Twitch. The Amazon-owned live-streaming platform popular with gamers disabled Trump's account indefinitely on Jan. 7. “In light of yesterday’s shocking attack on the Capitol, we have disabled President Trump’s Twitch channel,” TechCrunch reported. With Trump’s incendiary rhetoric, the platform says it was “a necessary step to protect our community and prevent Twitch from being used to incite further violence.”

YouTube. YouTube has taken down channels that received a warning before and continued to violate its community guidelines. On Jan. 7, YouTube tweeted, “Due to the disturbing events that transpired yesterday, and given that the election results have now been certified, starting today any channels posting new videos with false claims in violation of our policies will now receive a strike.”

Pinterest. "Pinterest isn’t a place for threats, promotion of violence or hateful content," a spokesperson said. "Our team is continuing to monitor and removing harmful content, including misinformation and conspiracy theories that may incite violence.” The platform has limited hashtags such as #StopTheSteal since after the November election.

Discord. A favorite chat app of teenagers, Discord says it has banned the server The Donald. Mother Jones reported that while “there is no evidence of the server being used to organize the Jan 6 riots, Discord decided to ban the entire server today due to its overt connection to an online forum used to incite violence and plan an armed insurrection in the United States," wrote Ali Breland.

Parler—after the French verb “to speak”—touts itself as “Twitter without rules.” Launched in 2018, Parler is noted to have a significant user base made up of Trump diehards, conspiracy theorists and right-wing extremists.

It doesn’t remove posts that are racist or anti-semitic, thus those banned from the more mainstream platforms transfer to Parler. Even though it describes itself as “neutral” when it comes to political views, Parler is known to kick out leftist and liberal users or those that challenge right-wing viewpoints.

According to the New York Times, just as it was “gaining new clout, Parler is now suddenly faced with an existential crisis.” Google first suspended Parler on its Play Store, then Apple followed. 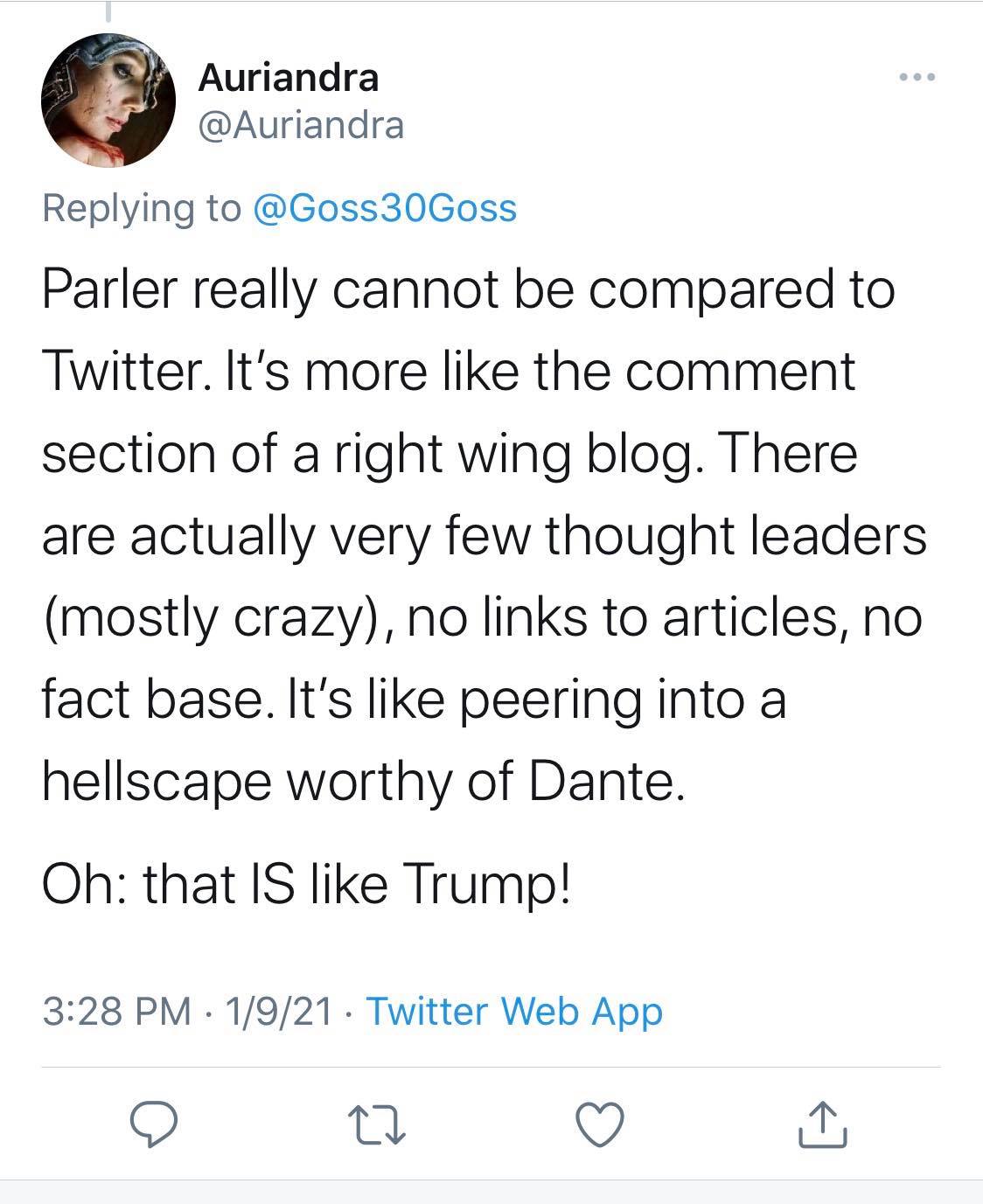 NYT reported that Apple had “received complaints that people used the Parler app, which mimics Twitter, to plan Wednesday’s deadly riot in Washington” and that was not “removing content that encourages illegal activity and poses a serious risk to the health and safety of users.”

Parler states on its website that it is neutral. “Content curation exacerbates hate. Biased content curation policies enable rage mobs and bullies to influence Community Guidelines. Parler’s viewpoint-neutral policies foster a community of individuals who tolerate the expression of all non-violent ideas.”

In May 2020, after Twitter flagged some of Trump’s tweets about mail-in ballots as “potentially misleading” and another tweet about George Floyd, who was killed by police officers, Parler experienced a surge in signups. 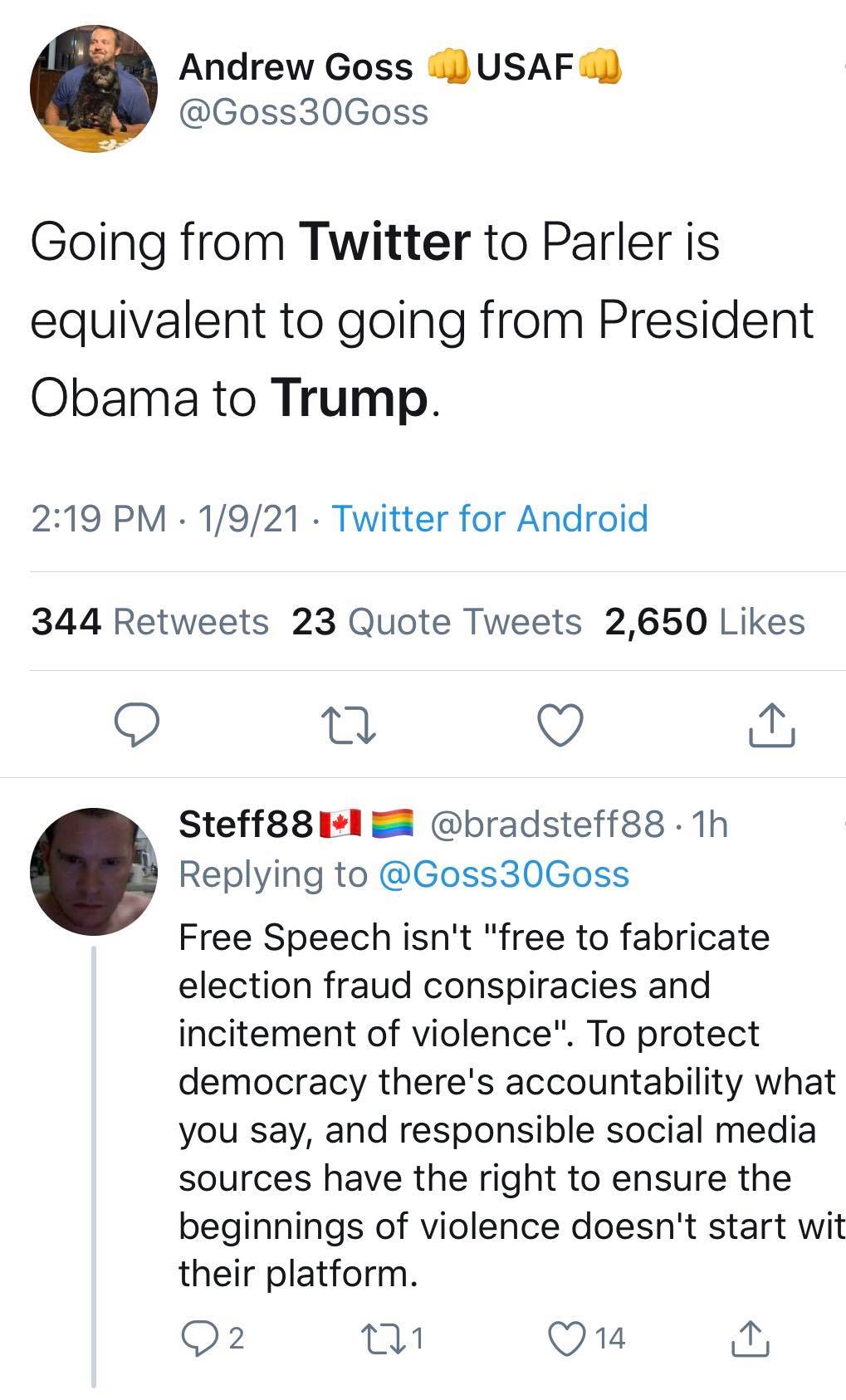 It published a "Declaration of Internet Independence" and vowed to ‘fight against the Tech yrants.” It also began using the hashtag #Twexit and  encouraging Twitter users to migrate to Parler

Observers have speculated that Trump may transfer to Parler, as many of his supporters already have, but as one user implied, it’s a downgrade, like the US presidency going from Obama to Trump. But Parler’s number of users now stands still as it has been suspended from app stores.

Ukrainian refugees in Poland: ‘We love Ukraine and want to go home’