With the Nas Academy and Whang-Od issue still under public scrutiny and reportedly undergoing legal discussion, former collaborators have come forward to distance themselves from the project.

Nas Academy was set to be a series of masterclasses held by creatives and popular names in their respective industries such as Catriona Gray, Jessica Soho, Michael Cinco, Erwann Heussaff, Jason Magbanua, Moira Dela Torre, Chinkee Tan, Carlo Ople, and James Deakin, among others.

The controversy started when the grandniece of Kalinga tattoo legend Whang-Od said that the 104-year-old did not consent to the promised "Whang-Od Academy" course.

Since the issue had been brought to light, Nas Academy has announced that it will pause all operations until the matter is settled. Their official website has also been taken down and replaced with this statement: 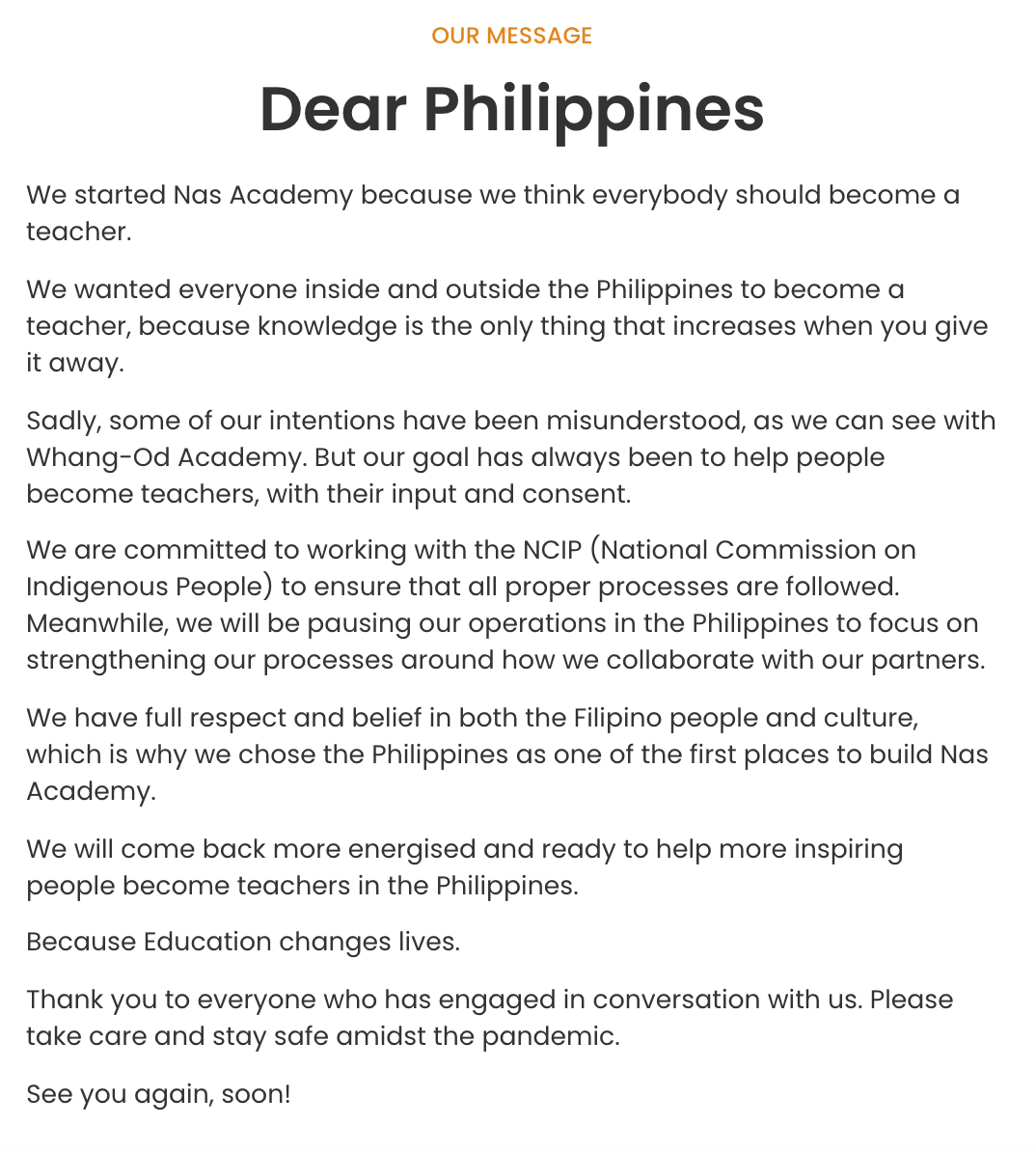 The speakers then released statements beginning with Cornerstone Entertainment announcing that the talent company, Gray, and Yassin decided to stop accepting new applicants to the “Catriona Gray Academy."

PhilSTAR L!fe has reached out to the creators slated to teach at Nas Academy. Here's what they've said so far.

The famed journalist was set to teach a class on broadcast journalism, but her show Kapuso Mo, Jessica Soho (KMJS) took to Facebook to share that Yassin and the journalist both agreed to discontinue the collaboration.

"In light of recent events, and after our team’s series of communications with Nas Academy, we decided and mutually agreed not to pursue the Jessica Soho course," they captioned.
"Nas Academy has informed us that they are working with the NCIP. We hope for the resolution of all issues raised."

In a statement to PhilSTAR L!fe, the videographer shared that the organization informed speakers of its pausing beforehand.

"Nas Academy made it easy for the instructors. I received an email stating that operations would be put on hold until things are resolved. I was already drafting a letter to opt out when I got the email."

"First, I must state clearly that dealing with the people from the curriculum development side was an absolute joy and learning experience. I was dealing with actual human beings who cared for education (of) both the student and teacher sides."

"This venture of course is not one hundred percent altruistic as a major part of my decision to sign up was to get an additional income stream. But we were making sure the attendees would get the most out the course. I was already waist-deep preparing and writing for the course when things blew up"

"As for Nuseir Yassin, I have not met or spoken to him," Magbanua added.

"As for the other issues that came up, it’s a terrible, convoluted mess of mudslinging that I’d rather not comment on. I do however stand by people I have know for longer like Ms. Shai Lagarde, who was one of the first to bring up said issues."

Magbanua ended his statement by saying that  "Pinoybaiting is a real thing. But it's as much a problem of the audience as the content creator. Let's all be wiser after all this."

The videographer was slated to teach a course on visual storytelling.

“PP Academy (Panlasang Pinoy Academy) was in the works under the Nas Academy platform, but I decided not to purse in support [of] Apo and the exploited Pinoy hospitality!” Merano said with the hashtag #icandoitonmyownanyway.

Meanwhile, speakers Carlo Ople, Chinkee Tan, and Erwan Heussaff all confirmed in separate statements that their programs are also now on hold.

Filipino-British host James Deakin also refrained from speaking on the subject as he mentioned that the case is currently being handled by the National Commission on Indigenous Peoples (NCIP). A recent video from creator Nuseir Yassin confirms this.

Amid the clamor, it's clear that Filipino fans are affecting the Nas Daily Facebook page, as it has lost over 600,000 Facebook followers since the controversies per the online analytics site SocialBlade.