Malacanang admitted that some government officials did jump the vaccination queue ahead of a list that explicitly stated the prioritization of frontline healthcare workers in receiving the initial batch of COVID-19 vaccines.

Upon the rollout of the vaccine, President Duterte ordered the following officials—who are not frontline healthcare workers—to get the CoronaVac jab to boost public confidence in the vaccine: Testing czar Vince Dizon, vaccine czar Carlito Galvez Jr. and MMDA chairperson Benhur Abalos.

But beyond Galvez and Abalos, ranking government officials who were able to get the jab, even though they are not frontline healthcare workers and did not receive any mandate from Duterte, include DILG Undersecretary Jonathan Malaya and MMDA chief of staff Michael Salalima.

In a press briefing on Thursday, Presidential Spokesperson Harry Roque said both Malaya and Salalima received the shots “in good faith” after they were “prompted” by the Pasay General Hospital staff to get vaccinated.

“The two naman, in good faith, thought that they were doing the nation a service by having themselves vaccinated kasi nga mataas pa ‘yung tinatawag nating distrust sa bakuna. So, upon being prodded and being offered and guided by their desire to increase public confidence in the vaccine, nagpabakuna po sila,” said Roque.

Roque said that the interim National Immunization Technical Advisory Group’s (iNTAG’s) policy beyond Dizon, Galvez and Abalos, was “not disseminated properly” as Malaya claimed he was not aware that the group rejected the proposal to allot doses for “influencers” and public officials due to the limited supply of the vaccine.

Early this week, Quezon Rep. Angelina Tan, who is also a medical doctor, received criticisms after getting the jab at the Veterans Memorial Medical Center (VMMC). She said she got vaccinated not as a lawmaker but as a frontliner.

Tan, whose son works as a surgeon at VMMC, said the hospital required healthcare workers to submit a list of three dependents they want to get vaccinated. Vaccine czar Galvez said Tan will be investigated as there are no directives yet about vaccination of healthcare worker dependents. Tan insists she did not violate any law or policy.

It was also reported that Pasay City Vice Mayor Boyet del Rosario got the jab during the symbolic vaccination rollout in the city.

On Wednesday, Marikina City Mayor Marcy Teodoro disclosed that he was denied the vaccine when he volunteered to get the jab after the city’s low vaccine turnout for its frontline health workers.

Some Metro Manila mayors,including Isko Moreno of Manila, Joy Belmonte of Quezon City and Rex Gatchalian of Valenzuela City, have also expressed that they are willing to be vaccinated with Sinovac’s COVID-19 jabs once they are allowed to boost public confidence. 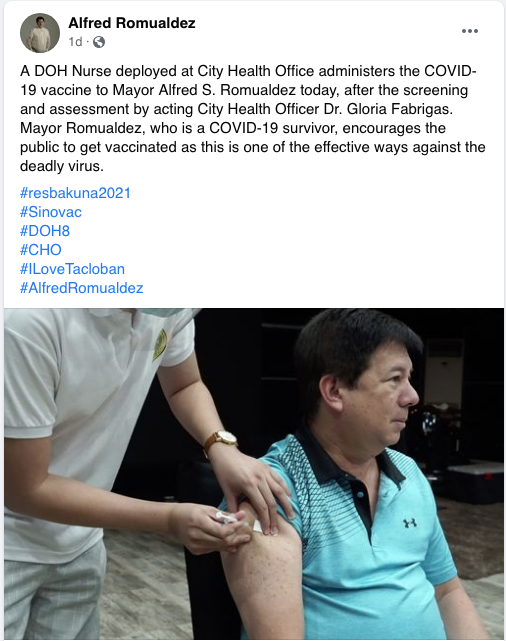 On March 22, Tacloban City Mayor Alfred Romualdez became the first known Mayor to get the Sinovac COVID-19 jab, despite the national government's mandate that frontline healthcare workers should be the first ones to get vaccinated first.

In a post on Romualdez’s Facebook page are photos of him, maskless, while getting inoculated by a Department of Health nurse. The post also said Romualdez, who tested positive for COVID-19 in December, went on to get the jab after the screening and assessment by acting city health officer Dr. Gloria Fabrigas.

In a statement, Romualdez said only 50 percent of medical frontliners in Tacloban wanted to receive the Sinovac vaccine.

“Because everyone was scared and everyone was waiting for me. So I did it to lead my people out of fear. And I’m glad they responded positively. Never say that I did it to save myself before others. I did it to make the people see that it was okay to get the vaccine. I wanted our people to take it for protection, and so that the efforts of the national government will not be in vain.”

He added, “I was also being true to myself and to what I said, that everything that hits us, hits me first. So, ako na lang ang gawing guinea pig n’yo.”

However, in a March 23 press briefing, Presidential Spokesperson Harry Roque noted that medical frontliners are still on top of the government’s priority list to be vaccinated.

Meanwhile, the World Health Organization said the Philippines’ supply of vaccines from the COVID-19 Vaccines Global Access (COVAX) facility may be at risk if the country fails to follow prioritization requirements. COVAX is an initiative by the WHO that ensures equitable access to COVID-19 vaccines, regardless of their wealth.

In a media briefing, WHO representative to the Philippines Dr. Rabindra Abeyasinghe emphasized that the vaccine from COVAX facility should be given to healthcare workers, the elderly and people with comorbidities.

“We urge the DOH and all partners engaged in the rollout of the vaccines to follow these prioritizations, so we don't impact and jeopardize future deliveries of vaccines through the COVAX facility to the Philippines,” Abeyasinghe said.

On Thursday, 487,200 doses of British-Swedish drug manufacturer AstraZeneca COVID-19 vaccines from the COVAX facility arrived in the Philippines, which are expected to be allocated for the priority groups mentioned by WHO.