Skateboarder Margielyn Didal may have fallen short of her Olympic campaign in Tokyo, but her infectiously vibrant personality still made an indelible mark on the world stage.

Didal landed at seventh place at the Tokyo Olympics on Monday, July 26, at the finals of the women's street event. But for the reception of fans and viewers from the Philippines after her event, she has won the hearts of Filipino with electrifying smile and energy.

Didal landed in the top trending topics of Twitter, with netizens noting how it seemed she had fun during her event despite her tumbles in four out of her five tricks.

"No one is having more fun here than the Philippines' Margielyn Didal," one sports reporter noted.

no one is having more fun here than the Philippines' Margielyn Didal pic.twitter.com/g4qAdxfd1v

"Margielyn Didal personified everything great about what skateboarding is bringing to the Olympics today. Took some heavy falls in the final and was clearly in pain but got up smiling after every one, and was dishing out hugs and cheers to her opponents until the end," said another.

She showed the best attitude of all competitors. Soaking in the experience and cheering all her competition on! If you were just judging from body language you'd think she won the gold! That's what matters. You represented us soooo well!! An Olympian and true pioneer for us! ? https://t.co/VyJcBHO5Qw

Even the Olympics' official Twitter account noticed, saying Didal's smile-and-thumbs combo, which she managed to whip out  after two straight falls, was the "Margielyn Didal seal approval."

This will be known as the "Margielyn Didal seal approval" ???? pic.twitter.com/tWolMAQykq

Didal even earned a number of Brazilian fans, after she struck a seeming friendship with Brazil's Rayssa Leal, who won silver. Didal and Leal have been shown to share a hug during the competition and even recorded a TikTok dance video.

Angelo Caro ?? and Margielyn Didal ?? are currently the two most beloved foreigners in Brazil.#Tokyo2020 #Skateboarding pic.twitter.com/NH477q3vZ5 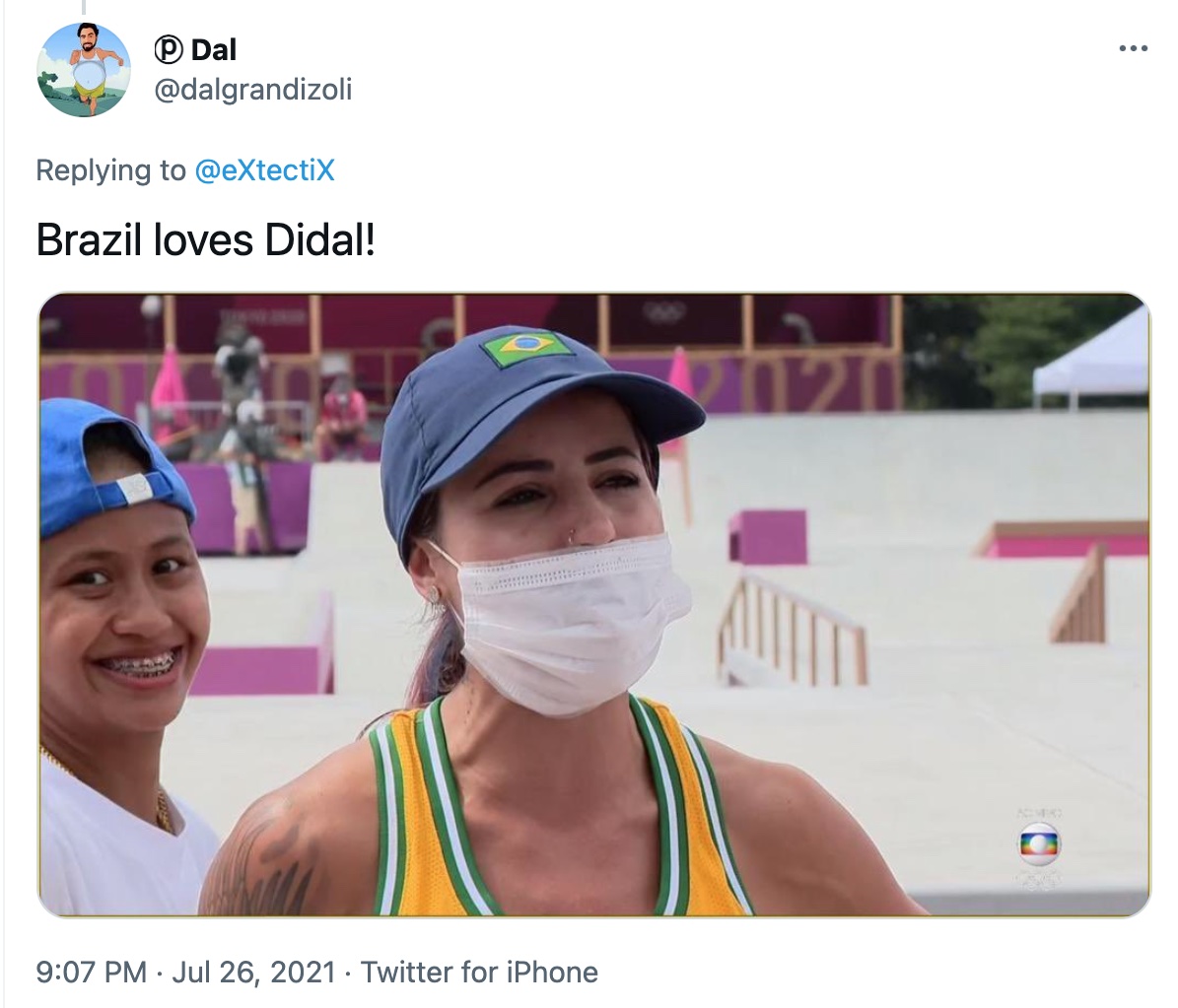 To top it all off, Didal even reportedly got major press coverage in Brazil.

Didal getting so much love from Brazil. She just made it to one of Brazil's top news center. Just to translate, they loved her happy/smiling personality. A lot of Brazilian peeps and celebs started following her IG. #Tokyo2020 @anthonysuntay @TheDeanQuinito @carlo_pamintuan pic.twitter.com/uYt4rUKHTG

As of the moment, the comments section of Didal's Instagram page is being flooded with Brazilian flags.

Aside from Brazil, Didal also got some love from Japan.