Ferdinand "Bongbong" Romualdez Marcos Jr. will officially assume office as the 17th President of the Philippines on June 30, 2022, at noon.

Marcos Jr. won by a landslide last May 9 with over 31 million votes, becoming the first majority president since 1986.

His landslide win also marked the return of another Marcos in Malacañang four decades since his late dictator father and namesake Ferdinand Marcos was ousted through the EDSA People Power Revolution.

Marcos Jr. will take his oath of office at the National Museum of Fine Arts in Manila around noon in what his camp described as a "very solemn" and "simple" ceremony. Marcos Jr. is also set to use a teleprompter for his inaugural address, backpedaling on his previous statement that he'll deliver his address without one.

Marcos Jr.'s press secretary-designate Trixie Cruz Angeles said he was advised to use a teleprompter "to ensure sequencing and coherence."

The event is expected to last for about two hours.

Before the inauguration, Marcos Jr. will first head to Malacañang to meet with outgoing president Rodrigo Duterte for the symbolic turnover of power.

The traditional departure honors will be held for Duterte, who is set to officially end his term at noon. Both Duterte and Marcos Jr. are expected to descend the stairs before the latter officially becomes the new occupant of Malacañang.

The Marcos Jr. administration would have to navigate the country in facing a record P13-trillion debt, the lingering effects of the COVID-19 pandemic, and a slew of much-needed infrastructure projects, among many other issues.

Bookmark and refresh this page from time to time for updates.

President Ferdinand “Bongbong” Marcos Jr. swore in the members of his Cabinet and other appointed officials after arriving at the Malacañang Palace.

Marcos Jr. called this oathtaking his “first act of official work” as President.

President Ferdinand "Bongbong" Marcos Jr. told Filipinos that by electing him as the 17th chief executive of the country, they rejected the politics of division.

In his inaugural address on June 30, Marcos Jr. reiterated how he offended "none" of his rivals during the campaign period, as he stressed on his message of unity anew.

"When my call for unity started to resonate with you," he told Filipinos, "it did so because it echoed your yearnings, mirrored your sentiments, and expressed your hopes for family, for the country, for a better future."

In spite of being the first majority president since 1986, Marcos Jr. noted that he's not the "instrument of change,"

"You picked me to be your servant to enable changes to benefit all. I understand the gravity of responsibility you put on my shoulders," he said.

Marcos Jr. said no part of our country will be neglected, and that progress will be made during his term.

"Believe. Have hope. The sun also rises as it did today as it will tomorrow. And as surely as that, we will achieve the country all Filipinos deserve," he said.

Marcos Jr. takes oath as 17th President of the Philippines

Ferdinand “Bongbong” Marcos Jr. has taken and signed his oath as the President of the Republic of the Philippines. 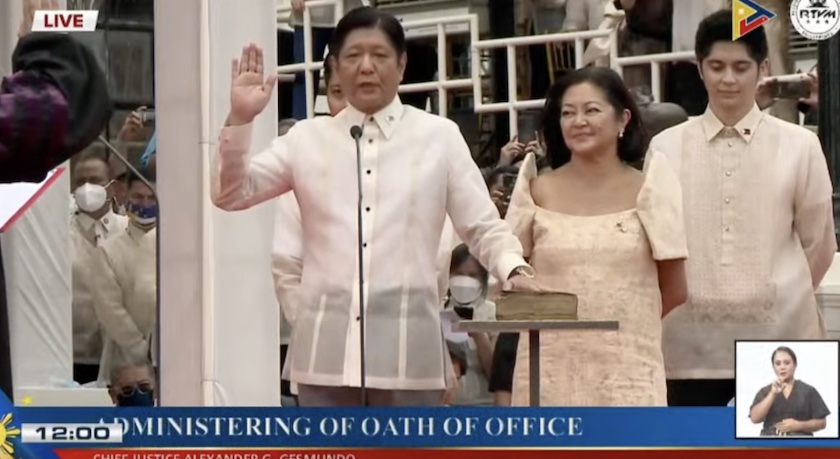 THE 17TH PRESIDENT OF THE PHILIPPINES 🇵🇭

Ferdinand “Bongbong” Marcos Jr. took his oath of office as the 17th president of the Philippines before Chief Justice Alexander Gesmundo at the National Museum of Fine Arts in Manila on Thursday. pic.twitter.com/EloQ0fx93V

Some Filipinos have taken to the streets of Times Square in New York to protest against the inauguration of president-elect Ferdinand Marcos Jr.

According to Anakbayan Queens NY, the rally will march to the Philippine Consulate General after convening in Times Square.

“We must continue the fight for genuine democracy in the Philippines against tyranny and demand justice and accountability for the Filipino People. Reject Marcos-Duterte!” the organization said on Instagram.

LOOK: Toni Gonzaga-Soriano sings the Philippine National Anthem during the inauguration of Ferdinand "Bongbong" Marcos Jr. at the National Museum of Fine Arts in Manila (📷:RTVM)

Gonzaga has been among the most prominent faces on the UniTeam campaign trail, singing for Marcos Jr. in every campaign rally.

A military-civic parade was also held for Marcos Jr., who was with his wife Liza and sons Sandro, Simon, and Vincent.

LOOK: A military-civic parade is now being conducted at the National Museum at the inauguration of president-elect Bongbong Marcos Jr. (📸: RTVM)

President-elect Ferdinand “Bongbong” Marcos Jr. and his wife Liza Araneta-Marcos have arrived at the National Museum.

Marcos Jr. and Araneta-Marcos were also joined by their sons Sandro, William Vincent, and Joseph Simon.

Esperon said Duterte will return to his hometown Davao City.

The Marcos Jr. camp is now headed to the National Museum for his oath-taking at noon.

Outgoing President Rodrigo Duterte was given the traditional departure honors on his last day in office.

Duterte alongside President-elect Ferdinand “Bongbong” Marcos Jr. descended the Malacañang staircase, signifying the transfer of power to the next administration.

Duterte left Malacañang first and is reportedly set to return to his hometown Davao City instead of following Marcos Jr. to the National Museum for the inauguration.

Victims and survivors of Ferdinand Marcos Sr.'s Martial Law have gathered at the Bantayog ng mga Bayani in Quezon City to protest the return to power of the Marcoses.

Participants had their own oathtaking as they vowed to “guard against tyranny” and fight against historical distortion and lies.

WATCH: Victims and survivors of the Marcos dictatorship from 1972 to 1986 gather at the Bantayog ng mga Bayani in Quezon City, few moments before the inauguration of president-elect Ferdinand Marcos Jr. | @manueltupas pic.twitter.com/ieqn9XIuN5

Marcos Jr. has arrived at Malacañang to meet with outgoing president Rodrigo Duterte for the traditional departure honors.

Marcos Jr. arrived at around 10:28 am and was met by Duterte after ascending the palace stairs. 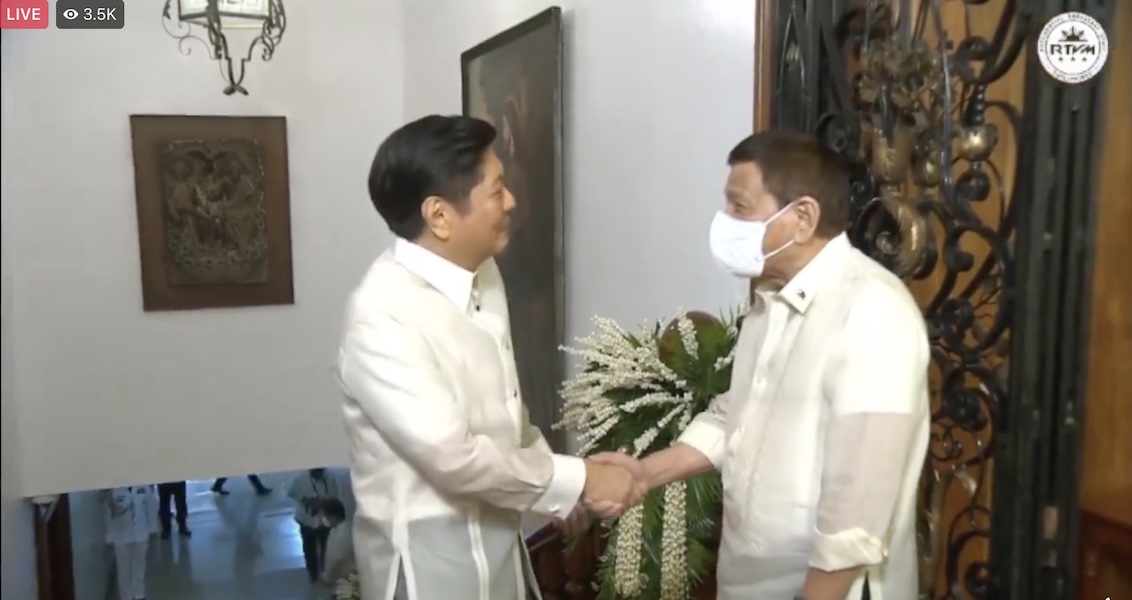 Marcos Jr. has signed the palace guestbook, which carries signatures of world leaders and personalities, and is now meeting with Duterte. 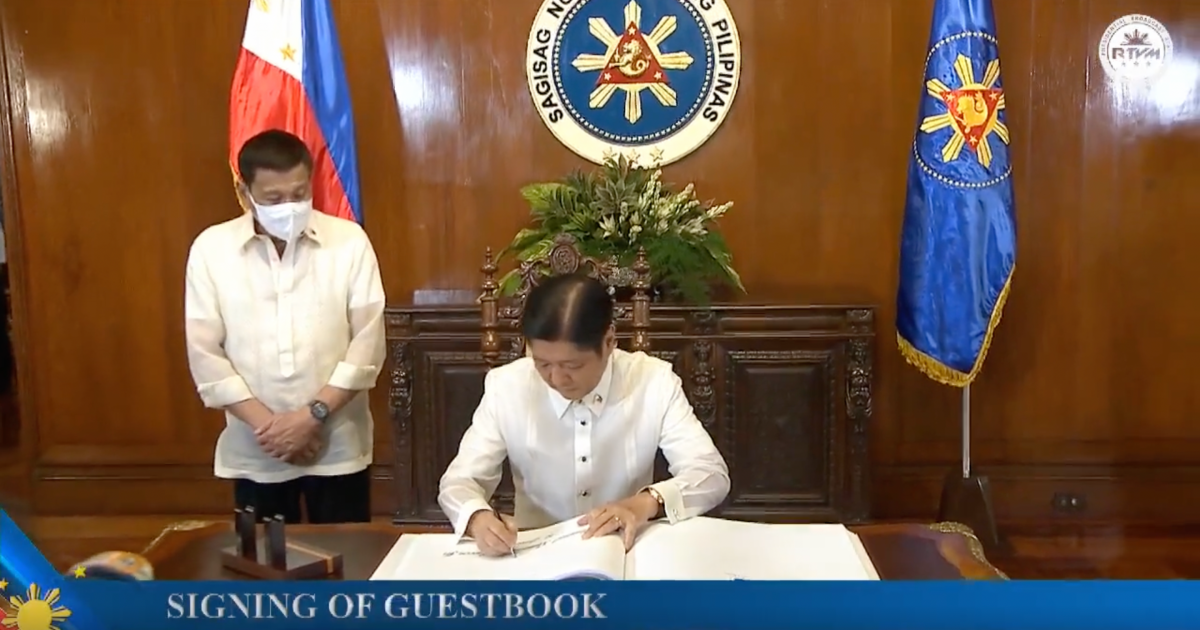 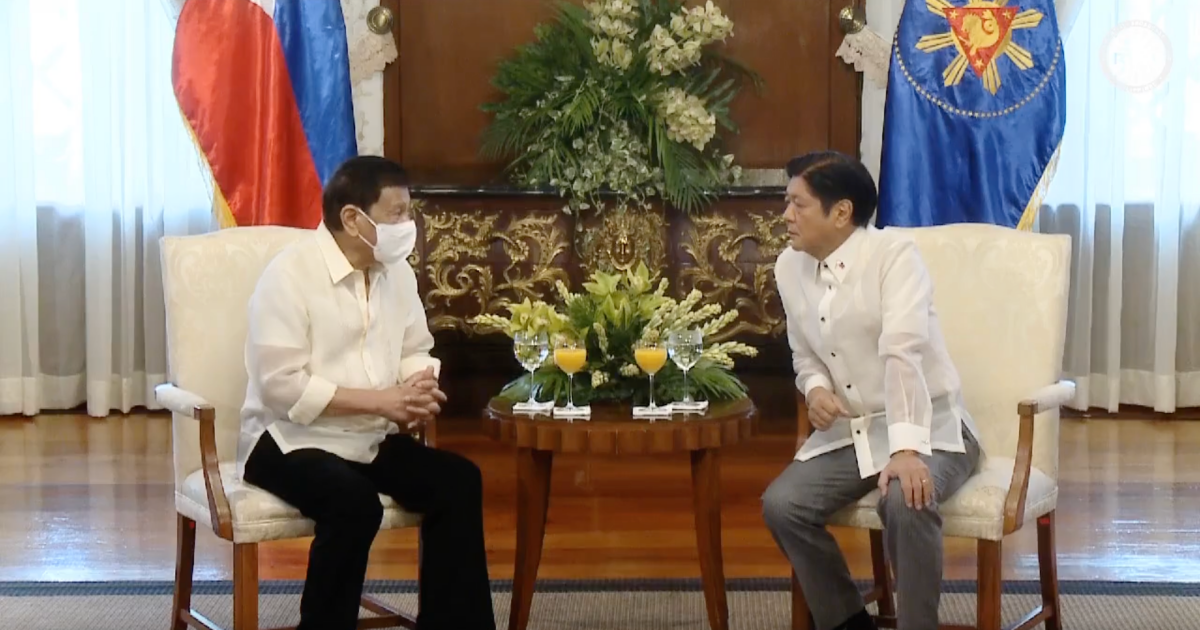 President Rodrigo Duterte has arrived at Malacañang Palace to meet with his successor, president-elect Ferdinand “Bongbong” Marcos Jr for the transition of power.

Duterte's term as the 16th President of the Republic of the Philippines ends at noon today, June 30.

President Duterte arrives at the Malacañang Palace on Thursday, his final day as the president of the Republic of the Philippines. He is set to meet president-elect Ferdinand "Bongbong" Marcos, Jr. (Screenshots/RTVM) pic.twitter.com/MJ0Z83CFQ9

The official portrait of Marcos Jr. made by painter Lulu Coching Rodrigez has been unveiled.

President-elect Marcos Jr. shares photos of what he and his family will wear at inauguration

Marcos Jr. shared on his official Facebook page photos of the two barongs he will wear today during his inauguration at the National Museum.

The president-elect said that the barong he will wear at the inauguration designed by Albert was inspired from rayadillo, the traditional uniform of soldiers during the Spanish occupation. His shoes were made by Sapatero Manila.

Marcos Jr. also shared the piña terno that will be worn by his wife Atty. Liza Araneta-Marcos, and was designed by Leslie Mobo. Her shoes, on the other hand, was made by Lila Almario of Greggs Frame.