While I’m tempted to approach this question tongue-in-cheek, the issue is much too essential to be a laughing matter. To begin, let’s trim it down to their bare, easy-read essentials.

Criticism is exposure. It is calling out what is largely defective or criminal based on available evidence. It belongs to what the Constitution calls the “redress of grievances,” a constitutional right based on our laws (Art. III, Sec 4 of the Bill of Rights, 1987 Constitution).

The motive for criticism is to right what is wrong, to set the matter straight. The end-result of criticism is restoration and refinement of what has been judged crooked and unacceptable in a thinking society.

Condemnation should not be without evidence or proof, or else that would simply be an attack. Evidence is necessary because it zeroes in on the part that needs fixing. Think of your annual medical checkup, with the doctor telling you to lay off the lemon glazed donuts because your sugar is three times the allowable rate.

Red-tagging and learning poverty: A closer look at the hydra

Criticism forms the very nut and bolt of the public’s right to free speech, free expression and freedom of the press. This shapes the relationship between government and the governed by balancing off the swathe of power of elected officials and what the people can do to hold the State accountable.

In short, criticism is the means to hold public office responsible for their deeds. What government does as a matter of duty and power is offset by what the public exercises as its right as citizens of the country.

Red-tagging, on the other hand, is a veiled government policy based on the 1950s America of Sen. Joseph McCarthy. McCarthyism, it was called, began by labeling and tagging citizens as either communists or terrorists without any sliver of evidence.

The purpose of the labeling is to altogether dispense with due process and judge the person based solely on what he or she believes, not what was actually done. And even if evidence is presented, it must be understood that believing in an idea such as communism is not illegal.

Accepting an idea and choosing to carry out the idea are worlds apart. Red-tagging presumes that just because one believes a certain ideology that the same is predisposed to acting it out in real time. 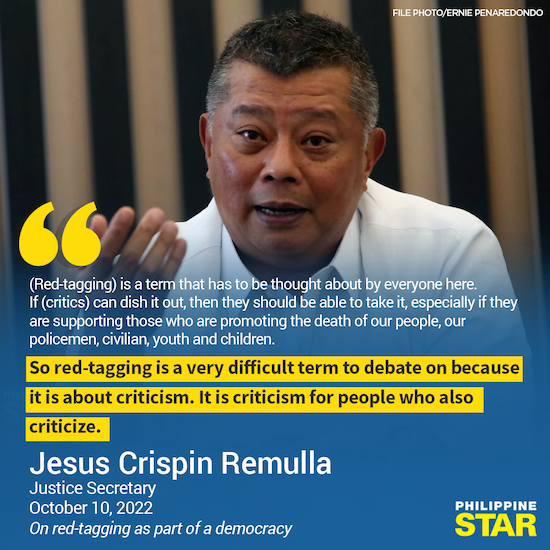 Red-tagging is also considered an abuse of power because it goes against a person’s right to freedom of thought. In legal terms, crime is socially-harmful behavior. Thinking of robbing a bank is not the same as robbing a bank. The final choice of acting it out stands between the two.

Likewise, red-tagging builds on the presumption that you and I can be held accountable for “crimes” on mere suspicion. Its motive is clear as day: to extend State power to reaches far beyond what is allowed by law.

Red-tagging in the Philippine setting poses a grave danger to victims in that it seeks to justify government forces’ treatment of those red-tagged – with utmost prejudice and violence.

Red-tagging and criticism, therefore, are not the same. The difference is not simply between apples and oranges. Their disparities are humongous, their purposes, motives and practices totally distinct from one another.

Red-tagging is an accusation largely based on hot air; criticism is a moral judgement with cause. The former is a brazen violation of our laws, the latter a constitutional right.

No amount of somersaults in logic can change that.