The Twitter account of the Chinese Embassy in Manila just had a busy week, as it fired off a string of indignant rejoinders over comments of other countries regarding Chinese ships in Julian Felipe Reef, as well as clapbacks against the United States.

On March 21, the Department of Foreign Affairs filed a diplomatic protest over the presence of Chinese ships in the Julian Felipe Reef in the West Philippine Sea, which the Armed Forces of the Philippines confirmed to number 183.

The Chinese Embassy put out a statement on March 22, denying the presence of a Chinese Maritime militia and that “it has been a normal practice for Chinese vessels to take shelter” in the area.

On March 23, the Chinese Embassy’s twitter account replied to a news story quoting the US Embassy’s expression of support to the Philippines in the issue. 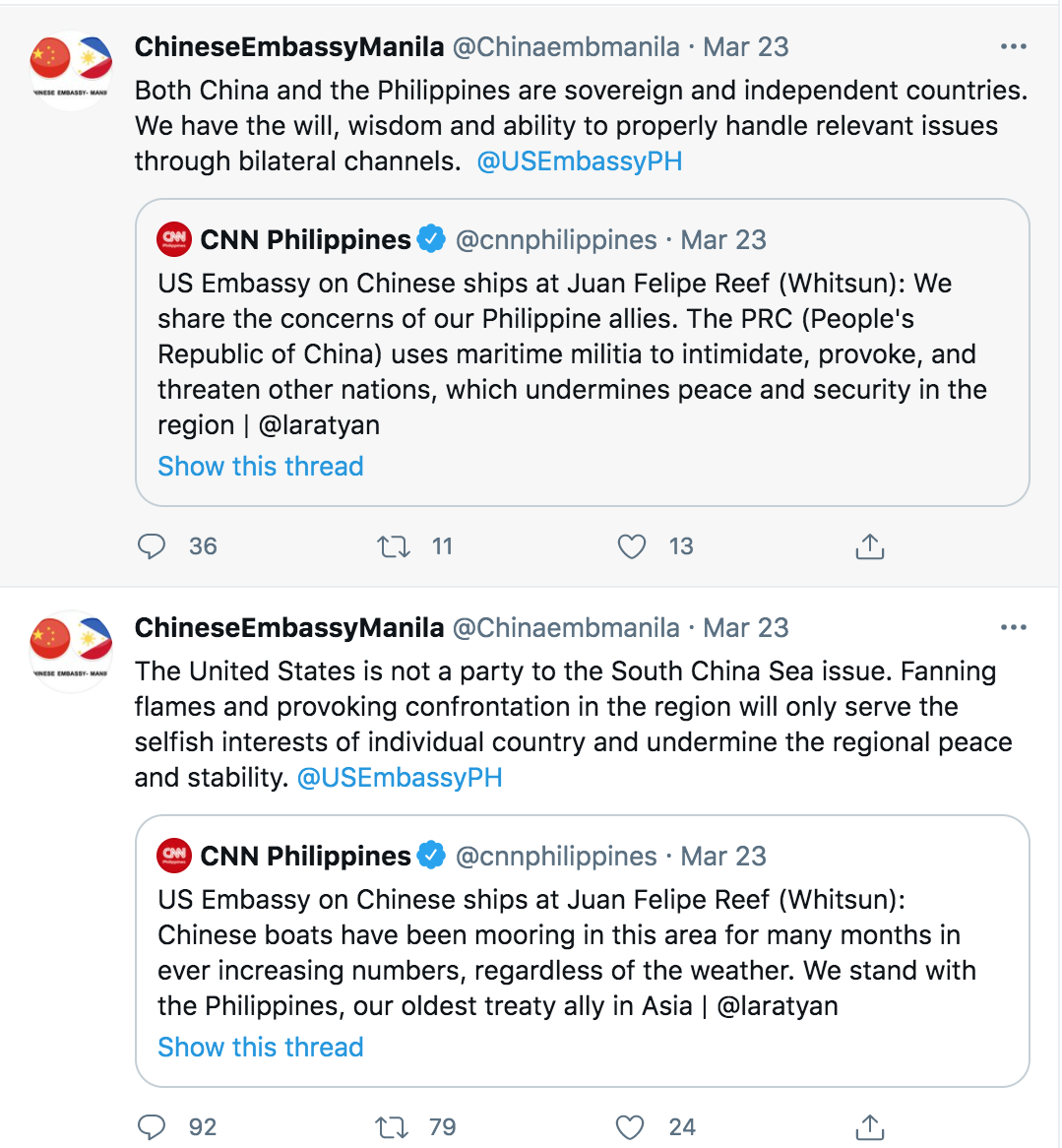 It did the same the following day, March 24, replying to a similar statement of support for the Philippines this time posted by the twitter account of the Japanese Ambassador in the Philippines.

“Such despicable behavior is inviting the wolf into the house, betraying the collective interests of the whole region and doomed to fail,” the Chinese Embassy stated. 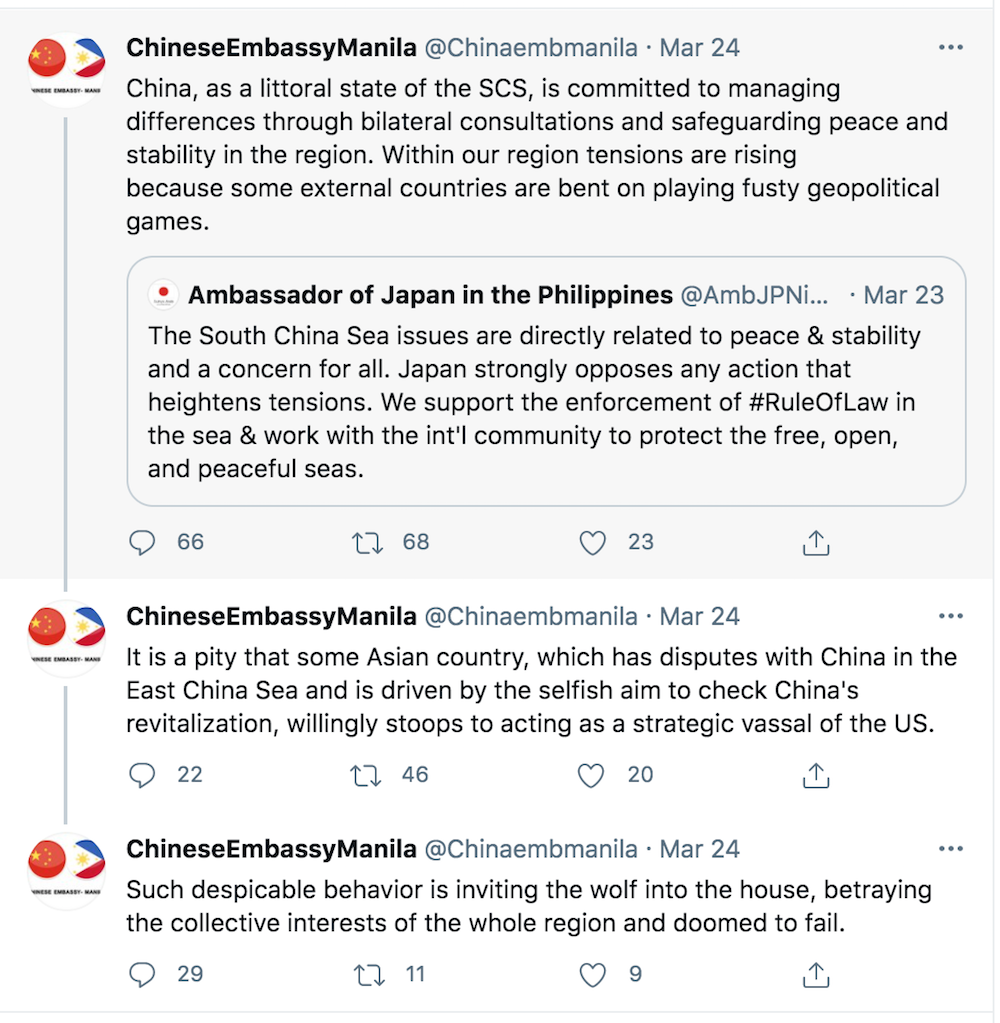 On March 25, the Chinese Embassy posted photos of foreign ministers from the UK, Australia, and Canada, all of which expressed support for the Philippine position in the West Philippine Sea issue, and called their comments “irresponsible.” 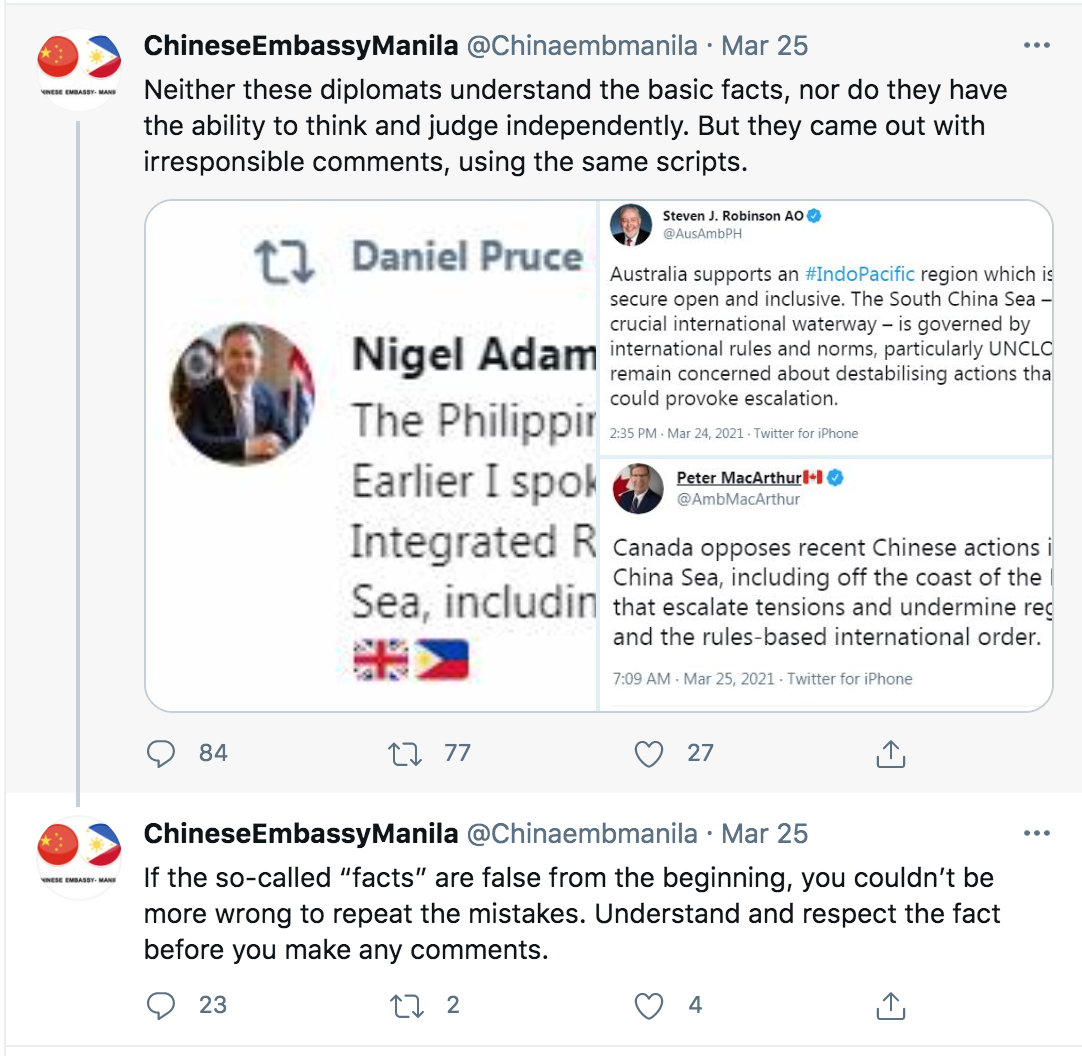 But the West Philippine Sea wasn’t the only issue that kept the Chinese Embassy’s twitter account preoccupied. It also put out posts denying reports about forced labor and exploitation of Uyghurs in Xinjiang.

But clearly, social media was not the only battleground for China this week.

Still over the controversial Xinjiang issue, a number of Western brands are now being squeezed out of the lucrative Chinese market through a string of consumer boycotts galvanized by a number of Chinese celebrities cutting endorsement deals with the brands. These now-maligned brands in China reportedly issued statements, dated or otherwise, that expressed concern over the issue of using cotton from the region.

H&M, Nike and other Western brands face growing consumer boycott in China due to Xinjiang backlash

These incidents also come on the heels of the US-China Summit in Alaska, where the two countries publicly locked horns in a highly contentious exchange.

After the meeting, some of the soundbites of Chinese Party foreign affairs chief Yang Jiechi — “Stop interfering,” “Chinese people won’t swallow this,” “Chinese has no qualification to talk down to China,” — gained cultural currency in China and began appearing on a number of online merchandise.

China bucked the global trend last year after it emerged from the pandemic, that it has now largely controlled, with a stronger economy, which even grew 2.3%, and a continuously growing military. This year, in July, the Communist Party of China will mark its 100th year milestone, where its General Secretary Xi Jinping is mainly expected to cement his one-party rule legacy, and further catalyze the country’s assertiveness on the world stage.