Editor's Note: The following are excerpts from the book The Aquino Legacy: An Enduring Narrative. This article originally appeared in The Philippine Star on February 8, 2016.

What was originally scheduled as an hour-long interview with President Benigno S. Aquino III spilled over to another hour, to our surprise, with cues that he could still be available should it be necessary. An indication that the President was enjoying the conversation, Presidential Communications Office (PCOO) Secretary Sonny Coloma was to say afterward.

The President was relaxed and gave the assurance at the start of the session that he would try to answer all the questions expressly meant for this book, even as he was previously—and rather apologetically—forewarned that these would range from the political to the personal to the mundane. True to his word, he was candid and honest—and maintained an admirable, unhurried focus on the interviewer and never once allowed his gaze to wander. We were prepared for a simple office setup, but a videographer, photographer, and a staff of about a dozen, were also present at the Malacañang Music Room on Sept. 16, 2015. And although we had known him for decades back from the time when he was anonymously known as Ninoy and Cory Aquino’s only son, we confess there was still undeniable awe about PNoy’s presidential presence today.

ESC: What are your thoughts during these last few months of your presidency and as you look toward the future?

PNoy: You know, whenever I go out in public and with all these cellphones and cameras, there’s always that demand for pictures—a lot of times pictures and selfies, regardless of the age bracket of the people. Even when people just wave at me, for instance in a motorcade, these tell me there is an appreciation for all the efforts that have been done the past five years. That there’s really a marked difference [between] where we came from to where we are now. I guess what I’m aiming to do and I’m still doing at this point in time is to make sure with our economy, to maximize the resources to effect the changes that we all sought from way back. I guess it’s the continuity I think of. If my dad was the inspiration to get us back to democracy, my mom to lead the fight, then I want to make sure that the achieved democracy works for everybody. And that there really are tangible benefits for all and it will be a self-perpetuating system.

PNoy: Ahh. (Laughs) Relax. The few times that I stay at Times were enough of a break. I guess I can liken it to going on a vacation. There really is an immense relaxation just being able to sleep overnight in Times. Probably we will have something in Quezon City perhaps, but unfortunately, our house right now is being remodeled so that is not an option. A lot of times, at the end of the day, I just have the thought that I’ll be going home soon. So I guess that’s the whole point, getting back to some normalcy.

ESC: But you haven’t set out any definite plans like Clinton’s Clinton Global Initiative or a presidential museum or library?

PNoy: I’m so caught up with today’s problems…that can wait. And by our laws, I cannot work for a year. So in that year, I will have enough time to plan what the next chapters will be.

I would like to think I was a part of that movement that changed the people’s attitude from one of cynicism and defeat to one of perhaps, unbounded optimism–that the Filipino is really capable and special and we can achieve all our dreams.

ESC: Do you intend to write a book about your years in the presidency?

PNoy: Manolo Quezon [Manuel Luis Quezon III, Undersecretary of the Presidential Communications Development and Strategic Planning Office] and I are discussing certain chapters of the book. We are putting down notes, hopefully to impart some lessons so that others will have an easier time when they are confronted with similar problems. Perhaps case studies on running government.

ESC: That’s not about being president?

PNoy: Well, about problems and issues even before the presidency. The Left has all these people who wrote histories from their perspective, but those at the Center and Left of Center, unfortunately, were so caught up with all their activities and they never really put down their experiences. Hopefully, we will not have a need to relearn the lessons that have already been learned. So the book will hopefully address that issue.

ESC. But will you miss Malacañang?

ESC: Or is there anything at all about this that you will miss?

PNoy: When I was in the opposition especially, I knew, and so many other people knew, what had to be done but was never done, and right now, if there’s anything I will miss, it is the ability to be able to shape the present and the future instantly, somewhat instantly. In the opposition, you were championing something you knew was right, yet you felt like a kid just hitting your head on the wall and not able to achieve anything. Here, I think we’ve achieved quite a lot and we can all imagine what can be further achieved because [we’re] starting from a higher level than where we were in the past. So will I miss anything? The point about not tolerating that which is wrong but doing corrective action as soon as you are able to, will be something that you will never have that direct a role in from the periphery. But at the same time, there has to be a transition. This has to be something that is self-nurturing. There will be others who will carry on.

They had a leader that they could trust, I never lied to anybody.

ESC: How would you want to be remembered after you’ve stepped down as president?

PNoy: I would like to think I was a part of that movement that changed the people’s attitude from one of cynicism and defeat to one of perhaps, unbounded optimism–that the Filipino is really capable and special and we can achieve all our dreams. Every time there is a criticism, valid or not, we’d like to think it is an advancement in our people being active in governance, being concerned which is the key to strengthening the democracy and making it really work for everybody. So we welcome that and again, I’d hope that people will say that I had a part in changing the attitude which was so prevalent five years ago.

ESC: How would you like to be remembered not as a president but as an individual?

PNoy: They had a leader that they could trust, that I never lied to anybody.

ESC: In terms of legacy, what do you want people to remember as you step down?

PNoy: Let’s go back to the issue of a president that can be trusted. Many possibilities were open to our people, some attained, some became reality. The support and the unity of the citizens have allowed us to overcome all the propaganda, all the falsehood, and we got somewhere. I think that’s the most important part, to have demonstrated that these achievements are possible at all. It is not an impossible dream. It is a possibility, a reality actually. The possibilities are now a reality. This reality can be perpetuated. 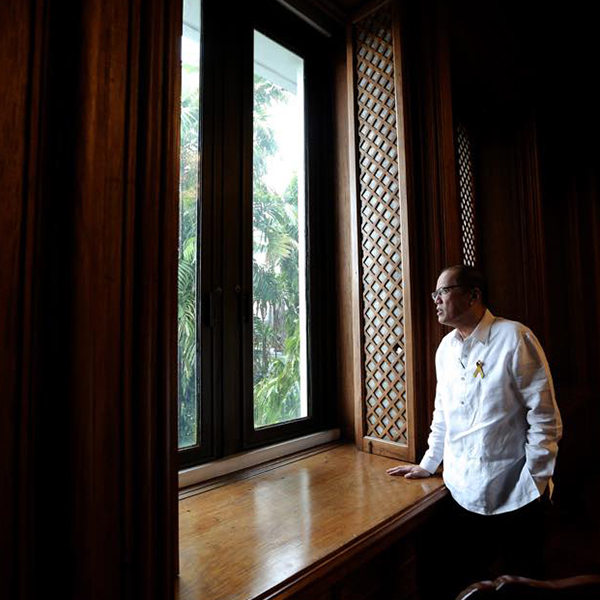 ESC: After the presidency, what is next for you? Are there more mountains to climb?

PNoy: In the past, there have been attempts of people who were in government to try to study what could have been done better and impart that knowledge. If you were a leader right now, you would be so concerned with the day-to-day matters that sometimes, in the Cabinet meetings, we want to study this and that, but at the end of the day, we have to do something today. We do not have the luxury of time, of getting the perfect solution that we would [have] if we were, perhaps, in the academe after an extensive study. But here, waiting for the perfect answer would be depriving the people of the good they would benefit from right now. It doesn’t redound to serving them because they would be kept in a worse off situation. When Barack Obama was here, he did say what his plans were: get in touch with all of these people that you worked with and are no longer in office and try to come up with a manual to help all those that come after us. How do you handle the insecurities, how do you tackle unforeseen consequences, how to decide in an imperfect environment when the needed information will only come after?

ESC: Do you intend to stay in politics?

PNoy: Move to other areas. Perhaps in public service you affect others’ lives in a general manner. I’d want to be more specific, more focused, more direct. Maybe help build the entrepreneurial abilities of the Filipino. I’m really not sure yet. My body is saying that I should take a break first and I’m sure everybody is saying the same thing. It is a fantasy for us here to return to Hawaii, to at least step on the beach this time. I went to Samal Island actually recently. We were inaugurating part of the Circumferential Road. There are many resorts that are opening up here and there and I said, “The first time I was here, I saw the port. Now, I see the beach. Now, I’m seeing the sea. Next time I come here, I’ll be able to get to the sand and wade in the sea. Maybe just to take it a little easy.”

To read the full interview, grab a copy of the The Aquino Legacy: An Enduring Narrative by Elfren Sicangco Cruz and Neni Sta. Romana Cruz. The book, which was published and exclusively distributed by Imprint Publishing, is available in all Fully Booked branches nationwide. Excerpts from the book were published with the authors and publisher’s permission.