A year ago on Jan. 30, 2020, the Department of Health reported the first case of COVID-19 in the Philippines.

With all the stringent health protocols, a lockdown that stretched to 11 weeks, and the national debt amounting to P10 trillion, how much has the country achieved, really?

A day ahead of the pandemic’s anniversary in the Philippines, DOH’s data showed that positive cases totaled 521,413. 475,765 have recovered, while 10,600 succumbed to the disease.

The numbers shoved the Philippines up the second spot of Southeast Asian countries with the most number of cases, next to Indonesia. And now, the Philippines has a more transmissible UK variant to tackle on top of the current strain.

PhilSTAR L!fe recounts everything the country has left behind in its continuing fight against the world’s biggest health crisis. 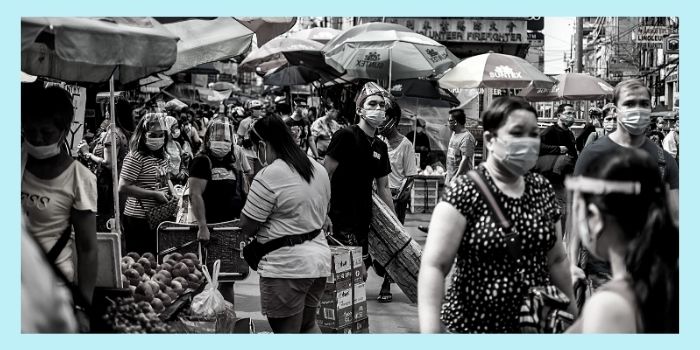 On Dec. 31, 2019, the World Health Organization (WHO) was informed about an outbreak of a mysterious pneumonia in Wuhan, China. The disease was later named "coronavirus disease 2019" or "COVID-19" taking after its cause, the novel coronavirus (SARS-CoV-2).

Meanwhile, DOH convened the Inter-Agency Task Force for the Management of Emerging Infectious Diseases (IATF-EID) as the country’s policy-making body in addressing the growing outbreak in Wuhan.

On Jan. 30, the virus reached Philippine shores through a 38-year-old Chinese woman who arrived in the country from Wuhan. DOH reported it as the first case of coronavirus in the country a.k.a PH1. President Rodrigo Duterte banned the entry of all travelers from Wuhan the following day. 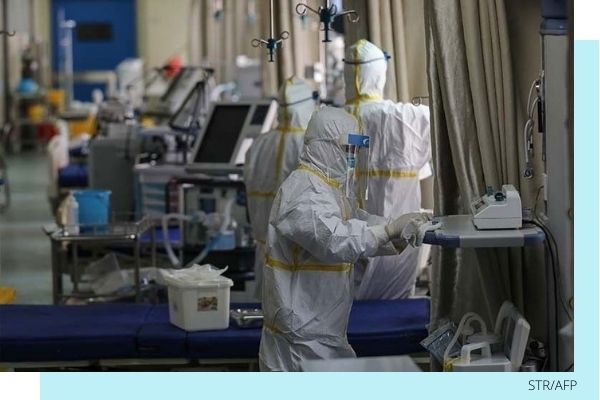 The virus continued to alarm Filipinos with the death of a male Chinese tourist in Manila on Feb. 1. It was the first death from coronavirus outside China.

On Mar. 6, Health Secretary Francisco Duque III reported the first local COVID-19 case involving a 62-year-old Filipino man with no history of travel abroad. DOH then raised the COVID-19 Alert System to Code Red Sub-level 1, as it reported two cases of local transmission. At the same time, they recommended the declaration of state public health emergency to Duterte in anticipation of a “possible sustained community transmission” of the disease. The President issued the declaration on Mar. 8.

On Mar. 11, DOH announced the first Filipino COVID-19 fatality. The patient was a 67-year-old woman confined in Manila Doctors Hospital. On that same day, WHO declared COVID-19 a pandemic with 118,000 cases and over 4,000 deaths in all continents in the world except Antarctica. 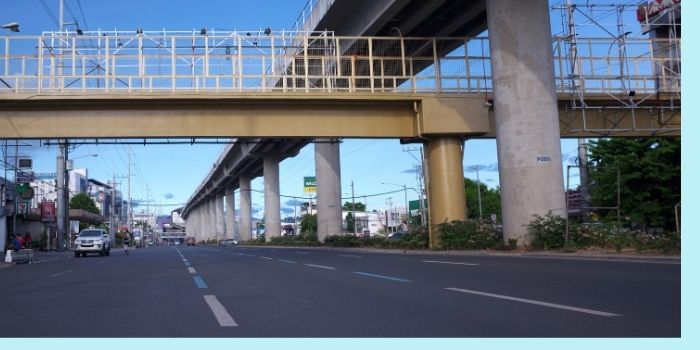 To further prevent the surge of the dreaded disease, President Duterte placed Metro Manila under  community quarantine on Mar. 15. Two days after, he imposed a Luzon-wide enhanced community quarantine (ECQ) with stricter protocols that confined everyone in their own homes. It included the suspension of mass public transportation and the implementation of work-from-home arrangement in most industries. Public movement was restricted except for medical and other emergencies.

Mayors of some cities and municipalities outside the National Capital Region implemented the same measure in their respective areas. 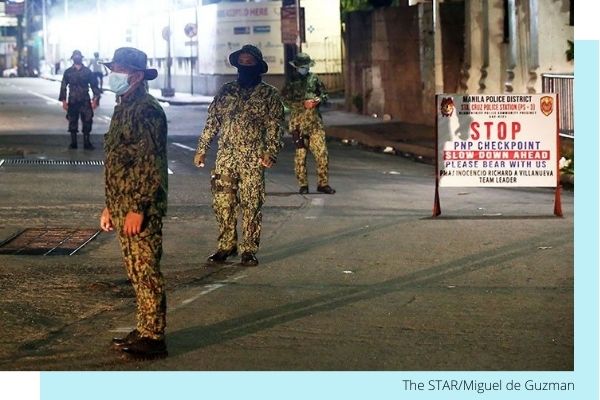 In the first week of the lockdown, Congress granted Duterte temporary emergency powers under the "Bayanihan to Heal as One Act" that authorized him to “realign, reallocate and reprogram” about P275 billion of the national budget for COVID-19 response.

To ensure that constituents follow the quarantine protocols, the IATF formed the Joint Task Force COVID-19 Shield that manned border checkpoints and streets. IATF also organized the COVID-19 National Task Force, which handles the operational command and daily concerns related to the quarantine.

Measures were reassessed every 15 days since implementation. Duterte later extended the Luzon-wide lockdown until April 30, while other cities in the country eased into modified enhanced community quarantine (MECQ). Metro Manila only transitioned to the less restrictive GCQ on June 1, while other cities did as early as May 15. The lockdown lasted for 11 weeks and was dubbed one of the strictest and longest community quarantines in the world.

As the Philippines grappled with the socioeconomic effects of quarantine, the pandemic was putting twice the pressure on the country’s healthcare system.

Early into quarantine, some groups called for free, mandatory COVID-19 mass testing nationwide, saying it would allow the government to take proper steps in managing the virus. But Health Undersecretary Rosario Vergeire stressed, “For now, mass testing is not in our consideration because we lack capacity. Even if we have testing kits but we do not have laboratories, we cannot do it. So we are completing the establishment of extension laboratories nationwide."

Fortunately, the Research Institute for Tropical Medicine (RITM) was able to increase its capacity from 600 tests to 1,000 COVID-19 tests per day beginning Mar  28. Mass testing for persons under investigation and monitoring began on April 14.

On the other hand, cases had climbed to 2,084 by Mar. 31, bringing recoveries to 49 and the death toll at 88—17 of the casualties were doctors that risked their lives at the frontlines of the highly infectious disease. The figure came after Duterte said that medical frontliners were “lucky” to have died in service of the nation.

Medical groups believed that the untimely deaths of their colleagues were caused by the lack of supply of personal protective equipment (PPE) for frontliners. “Ang death rate ng mga doctor na namamatay versus the total death is about 5%. It’s going to go up,” said Philippine Medical Association Commission on Legislation chairman Dr. Oscar Tinio in an interview. He added, “Why do you have to let us die? When there are still ways that we can prevent it? Parang gera ‘yan. Laban kami, pero huwag niyo kami pabayaan.”

On April 2, Vergeire announced that 15,000 sets of PPEs purchased by DOH for health workers had been delivered ahead of 985,000 arriving in the next weeks.

On that same day, IATF announced the mandatory wearing of face masks for people stepping outside their homes. Along with that, Nograles said that the government was converting concert halls and stadiums in Metro Manila as quarantine facilities for COVID-19 patients. It was one solution to the growing problem of private hospitals that had been operating at full capacity since day one of the pandemic. 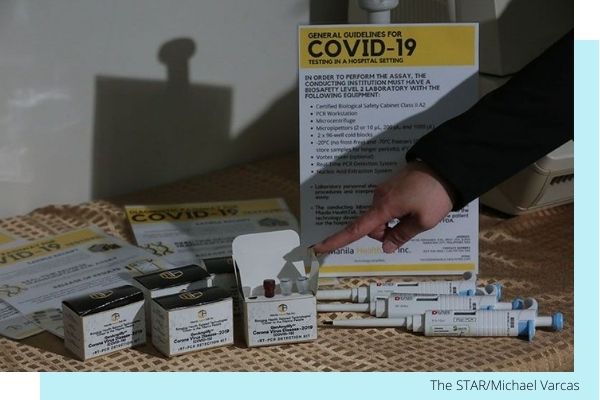 On April 3, the Food and Drug Administration (FDA) approved the first locally-made COVID-19 test kits developed by the University of the Philippines National Institute of Health.

On May 29, DOH modified its daily COVID-19 case reporting with “fresh” and “late” cases. Undersecretary Vergeire said that the new format aimed to alleviate fears that might be generated by the rising number of confirmed cases in the previous months. 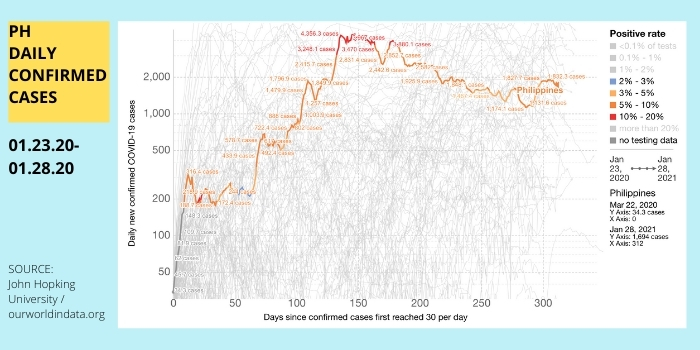 On Sept. 6, UP OCTA Research Group announced on that the country had, in fact, flattened the curve. “Actually na-flatten na siya,” OCTA Research Team fellow Guido David said in an interview with CNN Philippines’ Newsroom Weekend. He noted that the country’s COVID-19 reproductive number has decreased to around 0.94 from 0.99 the previous week. However, the expert said that this is no reason for Filipinos to be complacent.

Despite that, the number of positive cases in the country continued to rise, urging Duterte to extend the declaration of state of calamity until Sept. 12, 2021. 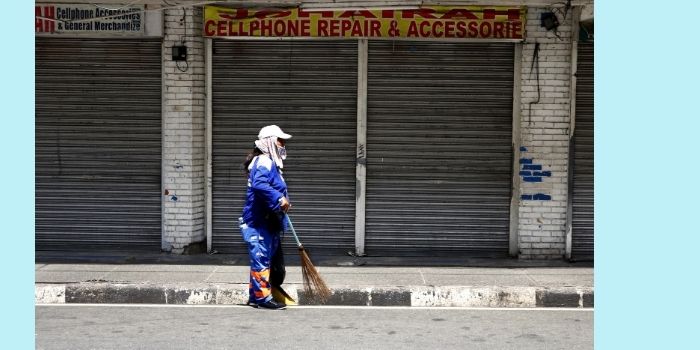 Apart from our sense of normalcy, the pandemic has taken away the livelihood of millions of Filipinos over the past year.

During the ECQ, only businesses classified as essential—hospitals, supermarkets, banks, and delivery services—were allowed to operate and for some, with skeleton workforce.

On Mar. 16, 2020, the Department of Labor and Employment launched the “COVID-19 Adjustment Program Measure” or CAMP to help workers affected or displaced by the pandemic. The program has provided cash aid equivalent to P5,000 to 1,059,387 workers by May that year.

In April, the Philippine Statistics Authority reported that unemployment rate in the country reached a record high of 17.7% accounting for 7.3 million unemployed Filipinos.

Still, the pandemic pushed the economy further down. In the first half of the year, the economy collapsed by 9%, National Statistician Dennis Mapa said in a briefing. For the whole year, the country’s gross domestic product (GDP) shrank 9.5%, the biggest contraction on record since 1946.

In addition to that, the country’s debt has reached P10.03 trillion by October last year. P7.91 trillion dues were incurred as of October 2019, while the additional P2.3 trillion were borrowed funds from local and foreign lenders in 2020 alone.

Our economy crashed to the lowest level since the war ended in 1946, so what now?

In 2020, Duterte acknowledged that the pandemic would not end in the country unless Filipinos were vaccinated. The President also noted that rich countries were likely to be given priority in the COVAX facility. Nevertheless, the national government and local government units worked to the bone to secure doses for their constituents.

On Dec. 1, 2020, Duterte signed an executive order granting authority to FDA to issue emergency use authorization for COVID-19 drugs and vaccines. And by Jan. 4, 2021, at least 61 out of 146 cities in the country had allocated millions of pesos for the procurement of jabs once available in the country.

Ten days later, the FDA approved EUA for the Pfizer-BioNTech COVID-19 vaccine, the first to be granted an EUA in the country.

Late last year, England’s Health Secretary Matt Hancock reported that a new variant of COVID-19 (B.1.1.7. SARS-CoV-2) had been identified in the UK. British Prime Minister Boris Johnson warned fhat it could be “up to 70% more transmissible.”

The Philippine government was quick to respond with a travel ban on incoming flights from the UK beginning Dec. 23 that year. It was extended to 35 countries by Jan. 15, 2021.

DOH, however, detected the new variant in the Philippines after a Filipino who arrived from the United Arab Emirates on Jan. 7 tested positive for the disease.

By Jan. 22, 16  more cases of the UK variant were reported in the country; 12 of these cases are from Bontoc, Mt. Province. Bontoc Mayor Franklin Odysey then imposed a lockdown on three barangays in the municipality until Jan. 31.

Justine is a marketer turned journalist who has worked for some of the big players in lifestyle media. She enjoys learning and writing about people and pop culture.