The Philippines is expecting the delivery of about two million doses of COVID-19 vaccines this month according to vaccine czar Carlito Galvez Jr. Tuesday.

In a press briefing, Galvez said the two million doses of vaccines that are expected to arrive this month consist of 1.5 million doses from Chinese company Sinovac and 500,000 doses from Russia’s Gamaleya Research Institute.

Galvez added that the country is expecting 500,000 of Sinovac’s 1.5 million doses to arrive as early as next week, while Gamaleya’s doses are set to arrive on April 12. 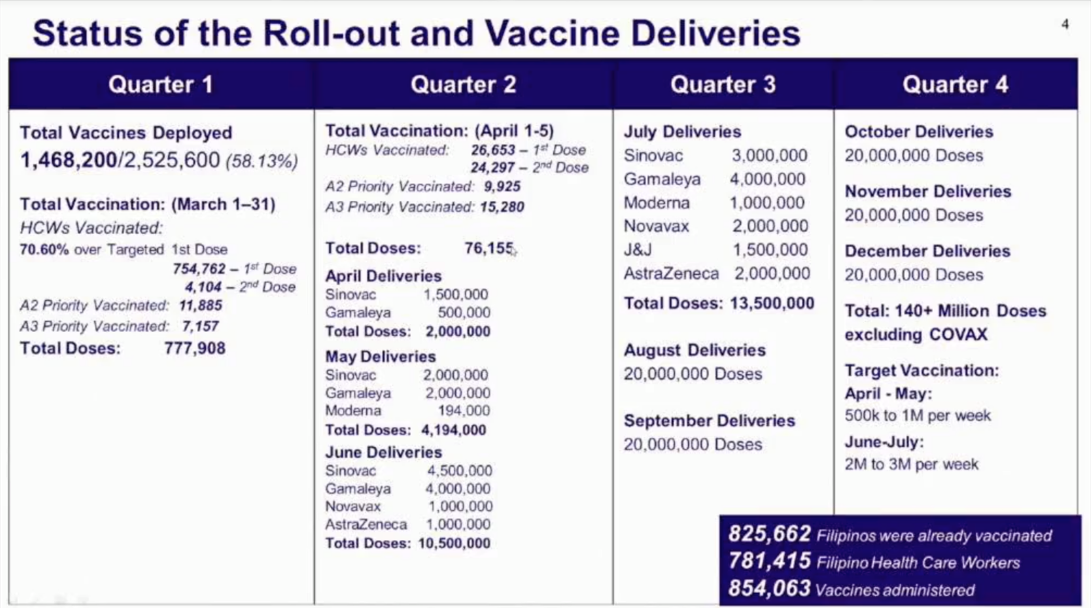 Since the country’s COVID-19 vaccination drive started on March 1, there have been 825,662 Filipinos vaccinated with either Sinovac or AstraZeneca jabs from the Top 3 priority groups—frontline health care workers or A1 (781,415), senior citizens or A2 (21,810), and people with comorbidities or A3 (22,437).

According to Galvez, about four million doses of vaccines are expected to arrive in May, which include two million from Sinovac, another two million from Gamaleya, and 194,000 from Moderna of the US.

With the number of expected vaccine arrivals in April and May, the country is targeting to inoculate 500,000 to one million individuals.

Galvez also presented numbers of expected vaccine deliveries in the second half of the year.

For June, over 10 million doses are expected to arrive in the country, including about one million doses of Novavax from the US. And of the 13.5 million doses expected in July, 1.5 million of them are the one-dose COVID-19 vaccine from Johnson & Johnson.

In June and July, the government targets to vaccinate two to three million individuals.

Meanwhile, from August to December, Galvez said the country is looking at about 20 million doses of vaccine deliveries per month. The figures that Galvez presented totals to 140 million doses, and these do not include the AstraZeneca jabs that come from the World Health Organization’s COVAX facility.

During the press briefing, Galvez also noted that as of April 5, the Philippines ranks 50th out of 155 countries when it comes to the total number of COVID-19 doses administered.

Among its Southeast Asian neighbors, the Philippines ranks fourth with its 854,063 doses administered as of April 5, trailing behind Myanmar with over 1.04 million doses, Singapore with more than 1.5 million, and Indonesia with over 13 million.