Style Living Self Celebrity Geeky News and Views
In the Paper Shop Hello! Create with us
@jillrobredo and @aikarobredo on Twitter, Leni Robredo on Facebook

Leni Robredo is back to living a civilian life after finishing her six-year term as vice president. And as she steps down from her office, her daughters and supporters couldn't help but get sentimental.

Robredo herself felt said she felt mixed emotions about leaving the country's second-highest post, but she said she'll continue to help those in need by kickstarting the Angat Buhay NGO to fight poverty on July 1.

Happy to have you back full-time, Mama 😌 pic.twitter.com/KdWHHpKyN9

"Every new beginning comes from some other beginning's end," wrote Tricia.

Every new beginning comes from some other beginning’s end 🎶🌅 pic.twitter.com/hGs4oCsS70

Meanwhile, Aika shared an IG story of a photo of the former VP standing at the Boston Marathon finish line. 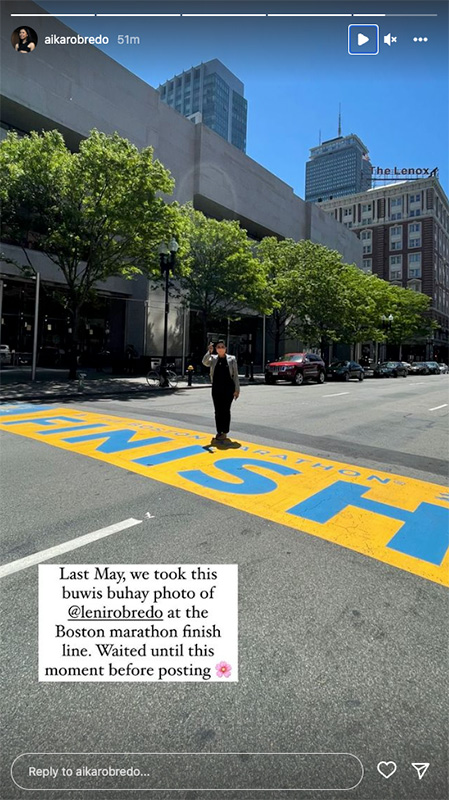 "Last May, we took this buwis buhay photo of @lenirobredo at the Boston marathon finish line. Waited until this moment before posting," she shared around 12 PM, right when President Ferdinand "Bongbong" Marcos Jr. was officially proclaimed as the country's 17th president.

A day before the inauguration of the new officials, Aika shared a family photo from 2016 when Robredo was sworn in as VP juxtaposed to a photo of their last day at the Quezon City Reception House.

Robredo also marked her transition to being a private citizen by changing her Facebook page's name from Vice President Leni Robredo to Atty. Leni Robredo.

Before stepping down, the OVP received the highest audit rating from the Commission on Audit for the fourth straight year.

"VP Leni" also trended on June 30 with supporters thanking Robredo for her service.

does it ever drive you crazy? just how fast the night changes.. 😭

ngiting "i served this country with nothing but love, compassion, and utmost honesty." ☺️🫶

i had the time of my life fighting dragon with you. maraming salamat, VP Leni! pic.twitter.com/B7eVDqb0Mw

Robredo will formally launch the Angat Buhay NGO through a street and art festival on July 1 and 2 at 284 Katipunan Avenue, Quezon City. Those who want to attend must register first.