Just a few hours after a wire story quoted a senior Chinese official, the country’s top disease expert no less, saying that Chinese vaccines have low effectiveness, the same Chinese official was interviewed in a Chinese state-owned media platform “refuting” the story. What gives?

China Centers for Disease Control George Gao (Gāo Fú) reportedly said in a conference, according to a report by the Associated Press, that Chinese vaccines “don’t have very high protection rates.”

The Associated Press tagged the story as a “rare admission of the weakness of the Chinese coronavirus vaccines.” A column from the UK paper The Daily Telegraph called it “an astonishing admission of weakness.”

But Gao's remarks, however, are not really new nor a slip, as he has actually been saying these things for quite some time already. 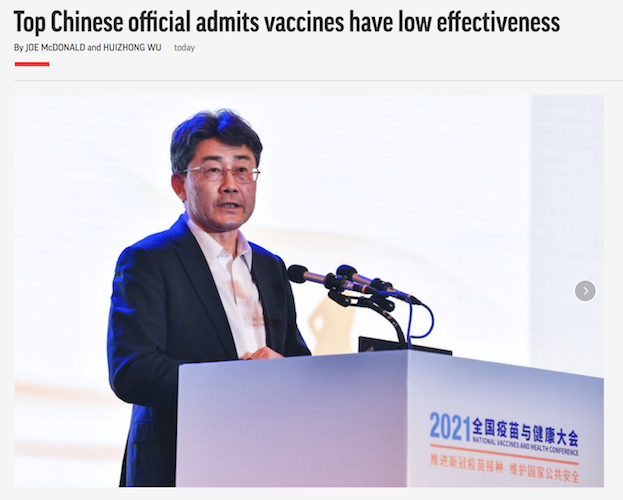 'Complete misunderstanding'
“We will solve the issue that current vaccines don’t have very high protection rates,” Gao was quoted at a conference presentation regarding COVID-19 vaccines in the southwestern city of Chengdu.

AP also said that “he praised the benefits of mRNA vaccines, the technology behind the two vaccines seen as the most effective, Pfizer-BioNTech and Moderna, months after questioning whether the then-unproven method was safe.”

In a message to the AP after the conference, he clarified that he was speaking about the effectiveness rates for “vaccines in the world, not particularly for China.”

Shortly after, an “exclusive” story came out in the Global Times, which is under the Chinese Communist Party, where Gao “refuted claims by some media outlets and overseas media platform users that the director ‘admitted’ Chinese COVID-19 vaccines have low protection rate, saying that it ‘was a complete misunderstanding’.”

"The protection rates of all vaccines in the world are sometimes high, and sometimes low. How to improve their efficacy is a question that needs to be considered by scientists around the world," Gao said.

Considering how the Chinese state has been playing up its vaccines in a highly charged propaganda campaign that at turns also discredits Western vaccines such as Pfizer/BioNTech's, it was no surprise that Gao came up with a clarification shortly after.

In a highly played up story by state-run Xinhua last December, it was the Oxford-educated Gao himself who mentioned possible risks with mRNA vaccines in a story by Xinhua, noting “there is a safety concern.”

With Gao's controversial remarks that were out of line with the state narrative over the supremacy of the Chinese vaccines, some have also parsed through his actual speech, which was delivered in Mandarin, to further make the case that he was misquoted.

I listened many times the recordings of Dr. Gao's remarks. He was talking about "pathways of addressing the not-high protection rates of existing vaccines", followed by highlighting the benefits of mRNA tech. A native Chinese speaker can tell you what "not-high" actually means pic.twitter.com/E01uda2C7j

The misquote case stems from the argument that Gao was, as he has maintained, talking about the general space for improving "existing vaccines," without pertaining in particular to Chinese vaccines.

Tom and Jerry story
But whether Gao referred to Chinese vaccines in particular or not, this was not the first time that he gave credit to the advantage of the highly touted mRNA vaccines, which is used by Western vaccines such as Pfizer-BioNTech and Moderna. Sinovac is a traditional vaccine that uses a weakened strain of the virus to trigger an immune response.

He also alluded to the work ahead of further improving vaccines, describing the relationship between the virus and vaccines as "like a Tom and Jerry story."

"We have several lines of vaccines, maybe some of them would cover some areas, some maybe not work. So there is a lot of unknowns," Gao told CGTN. "And hypothetically, we could still put it in the lab."

The belief that current vaccines are not yet that good was even carried in a story ran by state-owned Global Times last March, where it quoted an anonymous Beijing-based vaccines expert who said that "it is better to stay cautious about using current vaccines on older people as the current COVID-19 vaccines are not the best products yet, and China's successful control of the epidemic makes it unnecessary to take such risk."

Even last year, Gao has already made remarks about the advantages of mRNA vaccines, being quoted in a November conference that “the technology is fast, potent, and induces longer immunity."

This seems to be the 2nd time, not the 1st, that George Gao, head of the Chinese CDC, has referred to the superiority of mRNA vaccines -- only to have his comments effectively go unreported in China.

Here are his remarks from a conference in November, according to SCMP: (1/x) pic.twitter.com/qBLIZVXNlm

'Out of context'
Gao is even a listed co-author of a paper, which was published last February, about the efficacy of a single-dose mRNA vaccine. (China is planning to release its own mRNA vaccines by year-end.)

Just yesterday, the results of Sinovac's clinical trial in Brazil was published, which validated that it indeed had a 50.7% efficacy rate against symptomatic coronavirus, which was above the 50% threshold set by the World Health Organization above which vaccines could be used. Sinovac’s CoronaVac was also found to be 83.7% effective against cases where the patient required assistance, and 100% against moderate to severe cases, though the sample numbers were small.

By contrast, mRNA vaccines have a reported primary efficacy rate such as Moderna with 94.5% and Pfizer-BioNtech with 95%, though both need to be stored at much colder temperatures compared to CoronaVac.

But aside from the storage requirements, the limited availability of mRNA vaccines made the Philippines reliant on Sinovac to jumpstart the government's vaccination drive.

Vaccine czar Carlito Galvez said that a million doses of Coronavac is expected to arrive this month, on top of the 500,000 received last Sunday. The delivery is part of the 25 million doses secured by the national government from the Chinese pharmaceutical firm.

Galvez, in a briefing today, April 13, said that Gao’s remarks will not affect the government’s vaccination campaign.