Vice President Leni Robredo and former Senator Bongbong Marcos are once again crossing swords after their 2016 vice presidential match-up, which Robredo won. Only this time, it will be for the highest position of the land in a more crowded and highly heated ring with other aspirants.

What could we expect from Robredo-Marcos this time around?

To recall, Robredo and Marcos faced off in a tight vice presidential race in the 2016 elections. Robredo won with 14,816,817 votes, while the latter ended up second with 14,155,344 votes. Marcos has not accepted his defeat and challenged Robredo's victory by filing a lengthy electoral protest with the Presidential Electoral Tribunal (PET).

The Supreme Court, sitting as the PET, eventually dismissed Marcos’ protest in February 2021, stating there should be a “substantial recovery” in pilot provinces before proceeding to other areas. It turns out, Robredo even widened her lead with 204,512 votes in the pilot provinces identified by Marcos as Iloilo, Negros Oriental, and Camarines Sur.

But with the present political landscape, what are the implications of a repeat of the Robredo-Marcos rivalry? What are the chances of history repeating itself?

Robredo and Marcos as presidential hopefuls

In an interview with ANC’s After the Fact, Ateneo School of Government Dean Tony La Viña described Marcos as a “formidable candidate” for president whether “by himself or if he actually ends up allying with a Duterte.”

Franco likewise noted that Marcos is a formidable foe but she said Marcos “has been missing, except for his vice presidential recount” and electoral protests.

On the other hand, Franco said one of Robredo’s strengths as a presidential candidate is that she “has been in the public eye for six years.”

“It was difficult for her to work in the current administration, but she was able to do it despite the limited budget and not having a position in the cabinet,” said Franco.

But beyond their fundamental strengths and weaknesses, Manhit said that the outcome of the 2022 presidential races will also be based on the performance of the other contenders.

“In the 2016 elections, both of them were the strongest candidates in the VP race. But, every election is different. We need to look at other presidential candidates and who could sustain a strong campaign,” he argued.

Aside from Robredo and Marcos, 56 other candidates have formalized their bid to run for president, which includes Manila City Mayor Francisco "Isko Moreno" Domagoso, Sen. Manny Pacquiao, Sen. Panfilo Lacson, and labor leader Leody De Guzman, among others.

‘Every election is different.’

Despite Robredo and Marcos’ second face-off in the presidential race, Manhit argued that they have to think about the “differences” of the 2022 national elections from their tight VP race in 2016.

“When Leni ran and won, she had the support of a strong administration party at that time. Now, does she have that? Can she build a strong support, maybe not from a strong party but from a broader coalition of civil societies and various organizations,” he said. “For Bongbong, people are ready to go against him. It could be organizations, individuals, especially with the way he’s been changing the narrative of the Marcos regime,” said Manhit.

Manhit also believes that Robredo and Marcos’ “standing in electoral surveys” will also play a role in their presidential bids. According to a Pulse Asia survey released Sept. 29, Marcos is the second top pick for president while Robredo is the sixth.

Presidential daughter Sara Duterte-Carpio remained as the leading contender for president. However, she has maintained, as of press time, that she will seek re-election as Davao City Mayor.

Duterte-Carpio continues to lead in the most recenty Pulse Asia Survey, although her lead has narrowed. 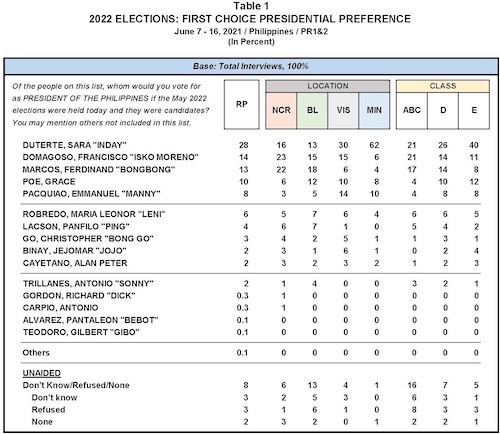 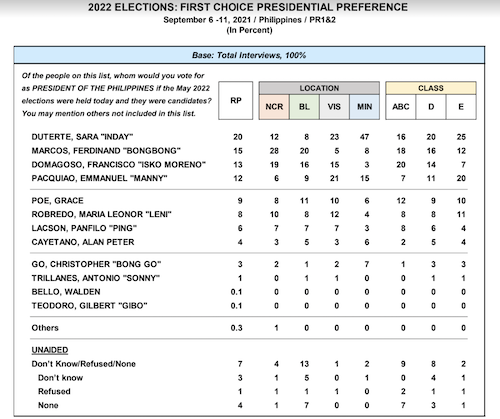 Franco also said the pandemic is another factor on how the elections will be different this time.

“We are up to a huge challenge. How do we get out of it? How do we prepare our health system to recover? How are we going to recover economically? We’re also reeling from the Duterte administration’s ‘war on drugs’ and its supposed closeness to China,” said Franco.

Casiple also said the upcoming 2022 elections is a combination of “new forces, new circumstances, and new challenges” which will impact in “newer ways.”

Will history repeat itself?

“It’s anybody’s game because the surveys we’re reading are mere snapshots of people’s sentiments regarding the presidential candidates,” Franco said. “The thing with BBM and Leni running though is that there’s a strong narrative there. A widow will once again prevent a Marcos from bagging the presidency.”

At the end of the day, beyond social media, the 2022 elections is all about the masses. Social media is still a bubble of representation, compared to the overall number of voters which are dominated by the Filipino masses.

Manhit also revealed that Robredo and Marcos shouldn’t underestimate candidates like Moreno, Lacson, and Pacquiao who “have strong ties with the masses.”

“At the end of the day, beyond social media, the 2022 elections is all about the masses. Social media is still a bubble of representation, compared to the overall number of voters which are dominated by the Filipino masses. However, everything remains to be seen since we’re only at the filing of candidacies,” he added.

Aside from formalizing his presidential bid, Marcos took his oath as member and chairman of Partido Federal ng Filipinas, a newly formed political party that earlier named him as its standard-bearer on Oct. 5.

Robredo filed her certificate of candidacy as an independent presidential candidate on Oct. 7. In an Oct. 8 press conference, she revealed that her running mate will be Senator Francis Pangilinan.

With reports from Ayie Licsi