The Story So Far 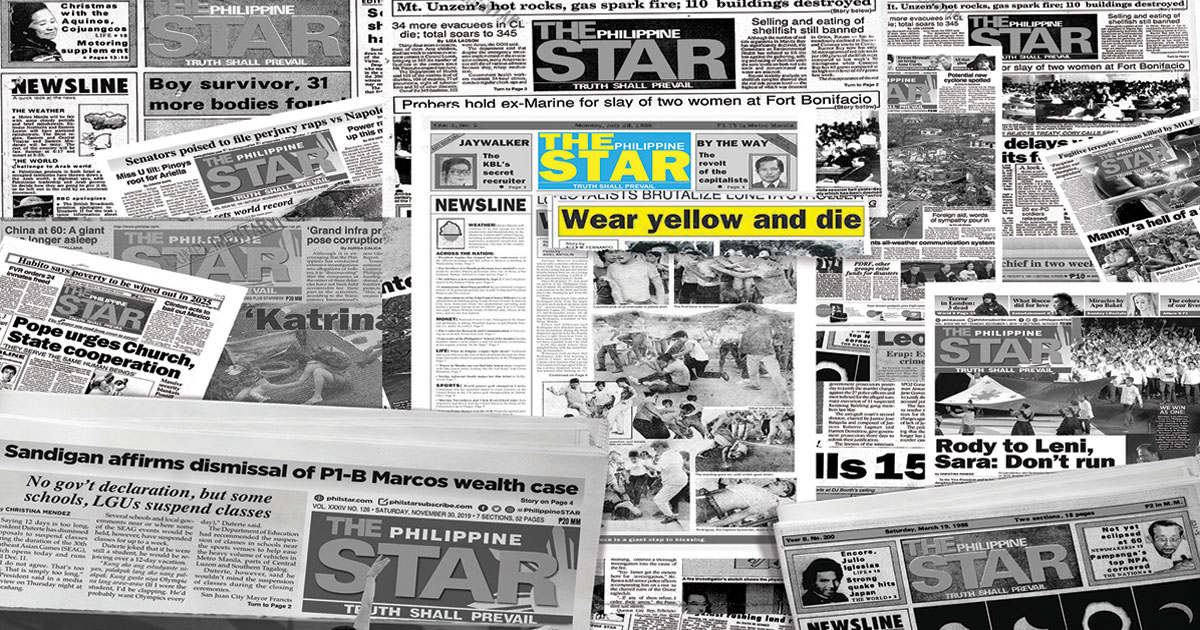 There’s always a thin line between coverage and protagonist, and those who dare cross over may be violating an unwritten ethic: thou shalt not interfere with a story’s natural course.

On the last Monday of July in 1986, a Port Area-based newspaper hit the stands for the first time, carrying as its banner headline an incident that occurred in nearby Rizal Park the day before.

Stephen Salcedo was beaten to death by loyalists of a dictator, who had fled the country just months before, some say dragged out of a jeep after flashing the “L” sign to the rallyists gathered for their usual Sunday harangue. It so happened that Salcedo was wearing yellow.

The death by a rain of kicks and punches (sipa, suntok, tadyak, batok) that lasted several minutes instantly became an issue of controversy, as there were media personnel around who did not step in to at least try to restrain an enraged mob, indeed, probably abetting the bloodlust by documenting the mauling step-by-step on an otherwise quiet afternoon, and on the front page of The Philippine STAR the next day was a photo of Salcedo near the end of his rope, his eyes begging for help that never came.

Scrolling through the headlines of the paper over the past 35 years would reveal a similar bent of getting as close to the action as possible (or in The STAR’s case in that first banner, right at doorstep), but not enough to intervene.

Scrolling through the headlines of the paper over the past 35 years would reveal a similar bent of getting as close to the action as possible (or in The STAR’s case in that first banner, right at doorstep), but not enough to intervene. Always there’s a thin line between coverage and protagonist, and those who dare cross over may be violating an unwritten ethic: thou shalt not interfere with a story’s natural course.

From Cory to COVID: An alternative history

Other stories in the past 35 were just as compelling if not more so: the Doña Paz sinking after colliding with tanker Vector in December 1987; the total solar eclipse in March 1988 that plunged a number of Mindanao towns into darkness; the death of former President Ferdinand Marcos in exile in Hawaii in September 1989; the intensity 8 earthquake that hit Luzon in July 1990, collapsing hotels and buildings from Cabanatuan to Baguio; the Mt. Pinatubo earthquake in June the following year that led to the breakdown of at least one cameraman as the media team of photographers jumped on their vehicle and tried to outrace the rampaging lahar — for a split second there it was as if they had reached the end of their rope.

Who can forget the historic Senate vote not to renew the lease to the US bases? The withdrawal notice was served and headlined on Jan. 1, 1992. A series of grisly and sensational crimes led to the restoration of the death penalty, which law was signed in December 1993. Then in February the next year, Filipinos tortured under Marcos were awarded $1.2 billion in damages by a US court coinciding with the eighth anniversary of EDSA.

January 1995 saw the visit of Pope John Paul II and mammoth crowds in Rizal Park spilling onto TM Kalaw and nearby side streets, and the pontiff exhorting the youth to “avoid moral slavery.” In March 1996, more than a hundred youths celebrating the end of the school year perished in the Ozone disco fire in Quezon City.

A generic headline was floods having to do with monsoon rains, the most memorable one being “Ondoy” in 2009, comparing to the tropical storm to “Katrina” that lashed New Orleans, the newsroom reduced to a power trio, plus one recruited from the upper floor.

Then, too, the two major airplane crashes of the biggest local airlines coming a year apart before the turn of the century — in 1998 and ’99 — and the ensuing grim task of recovering bodies.

Leo Echegaray was first to be lethally injected under the restored capital punishment, as well six or seven other convicts thereafter, but seven years later Congress voted to repeal the death penalty law, which the present administration is again trying to reinstitute, however seemingly de facto.

A most unusual headline appeared on May 26, 2000: “Hijacker jumps off PAL jet after robbery.” The event’s sheer bravado if not wherewithal would make director Raymond Red turn it into material for a film, Ang Himpapawid.

Of course, Leo Echegaray was first to be lethally injected under the restored capital punishment, as well six or seven other convicts thereafter, but seven years later Congress voted to repeal the death penalty law, which the present administration is again trying to reinstitute, however seemingly de facto.

There was the collapse of the Erap government, horrors of the Abu Sayyaf and invitations to the occasional beheading; the rescue of Gracia Burnham but the deaths of her husband Martin and nurse Ediborah Yap in the crossfire; the usual cloak-and-dagger of politics with a headline on Aug. 19, 2003 reading like the name for a new wave trance band: “The Jose Pidal Washing Machine.”

Filipinos mourned Fernando Poe Jr. in December 2004, the editor summoned by the spirits from his Malate watering hole to remat the issue powered by Carlos Primero, and six months later President Gloria Arroyo said sorry for the “Hello Garci” controversy.

The newspaper also chronicled the exploits of boxer Manny Pacquiao and his long reign in the ring, giving the reader a view from the front row in Vegas and beyond, as well as celebrated small but significant victories like the signing of the cheap medicines law in April 2008, and news that martial law victims would get $1,000 each as bannered on Jan. 15, 2011.

The nation mourned the passing of democracy icon Cory Aquino in August 2009, and in July the following year, her only son, newly elected President Benigno Aquino III, said let’s give the Philippines hope.

In April 2012, the Philippines brought the Scarborough Shoal dispute to the Permanent Court of Arbitration, which would rule in our favor four years later.

Super typhoon “Yolanda” slammed into Eastern Visayas in November 2013, a tragedy that would spawn books and films on the subject amid the long rebuild, as did the Marawi siege in 2017.

On April 29, 2015, convicted drug trafficker Mary Jane Veloso was given a last-minute reprieve by an Indonesian court; a couple of night editors weren’t able to remat the issue because there were no rides at the jeepney stop past midnight.

Oh, and there were gaffes, too, like the misspelling of former New York mayor Rudy Giuliani’s name in July 2008, which can only be explained as a prescient subtext considering his less than graceful exit with the Trump administration.

Then there was the drug war, the rehabilitation of Boracay, the successful hosting of the SEA Games and martial law in Mindanao. The explosion of Taal in early 2020 and subsequent ashfall prefigured the use of face masks and lingering community quarantines and shifting lockdowns in the year running COVID.

Is it outside the realm of possibility to think that maybe it was Salcedo’s double who died and the real guy in yellow, now 58, is wearing a mask and shield and presently riding a jeep to work in Port Area, in the name of truth, justice, each stoplight and banner a building block for a little more democratic space in the next 35 years?

The Philippine Star faces the new future on digital platforms

From Cory to COVID: An alternative history

The Story So Far

An editor and Lifestyle columnist of The Philippine Star, Juaniyo Arcellana is a book author. He has taught literature at UP Los Baños, UP Manila, and De La Salle University, and journalism at the UP College of Mass Communications. His favorite magazine is Granta. He also likes to feed stray cats at the basketball court during morning shootaround.