Pasigueños continue to raise their flag up high, as the National Task Force Against Covid-19 (NTF) recently recognized Pasig as the model city for the entire Philippines because of its COVID-19 risk reduction approaches.

“We can see that Pasig City is a model for the entire Philippines because of the leadership of Mayor Vico Sotto. With the support from the national government, we were able to slow down Covid-19 cases. Even during the Christmas and New Year holidays, we didn’t see a significant surge in the number of cases,” Dizon said in Filipino.

According to the Philippine News Agency, Dizon’s commendation came after the city’s health officer, Dr. Joseph Panaligan, presented the LGU’s concrete plan for its vaccination program.

In a tweet on that same day, Sotto proudly announced that this vaccination plan was the first to be approved by the Department of Health (DOH) and World Health Organization (WHO) in the country.

“I was told that Pasig is the first LGU with a DOH/WHO (World Health Organization)-approved vaccination plan!” the mayor said.

The pre-vaccination stage begins with the consolidation of the master list of vaccine takers, followed by the residents' registration to the program. The LGU will then proceed to initial screening, validating, and profiling of the registrants, as well as arranging the logistics and venue of the program. 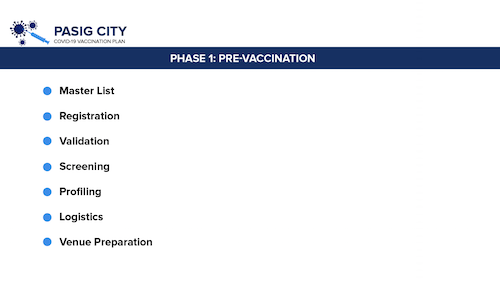 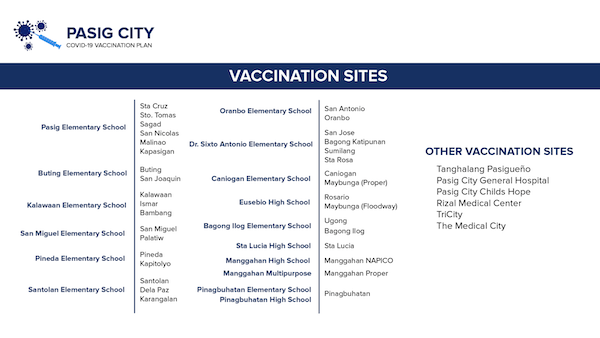 The LGU also assured proper storage of the jabs by renting 16 vaccine refrigerators with -40° Celsius temperature for its cold chain facility.

During the vaccination phase, registered Pasigueños can proceed to their designated vaccine sites through a "fleet of Pasig buses" that would pick them up from stations "along specially planned 'mini-routes' specific to the vaccination program."

In the vaccination site, Pasigueños will be asked to register and undergo a screening process prior to the actual vaccination. An emergency response team will also be on board in case a person would have to be transported to the hospital. 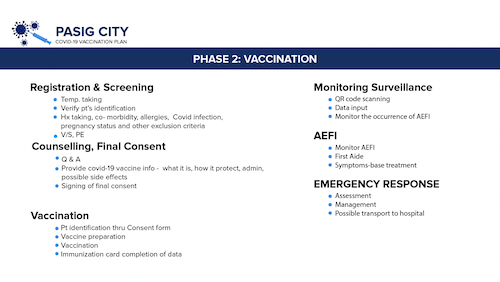 Lastly, the Pasig LGU will monitor the effects of the vaccine, especially with those who manifested adverse effects, during the program's post-vaccination stage. 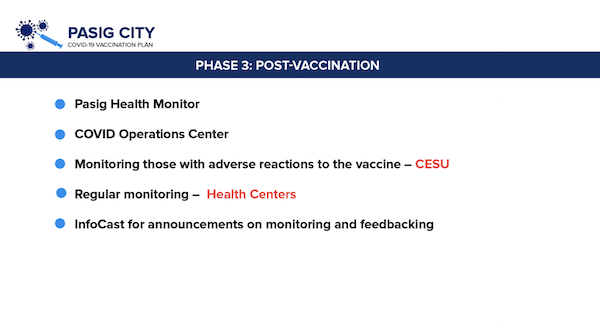 In an interview with DZMM Teleradyo on Jan. 4, Sotto announced that he has initially allocated P300 million for the entire vaccination program.

The LGU later signed a deal for the procurement of 400,000 COVID-19 doses from the British-Swedish pharmaceutical firm AstraZeneca.

"Actual quantity and date of delivery will depend on several factors,” he tweeted. “We'll buy from others too as opportunities arise.”

Justine is a marketer turned journalist who has worked for some of the big players in lifestyle media. She enjoys learning and writing about people and pop culture.