The government today had a ceremonial vaccination to mark the 10 million jabs administered in the country so far, but the road toward herd immunity still remains a long one for various cities in the Philippines.

At the ceremonial vaccination held today in Valenzuela City to celebrate the 10-million mark, vaccine czar Carlito Galvez said he is still hopeful of the country achieving herd immunity, or “population protection,” before the year ends.

Galvez said by next month, daily vaccinations may reach 500,000 per day as the private sector also starts its vaccination campaign. At present, the government said the average of vaccinations for the past seven days was 236, 867.

#HappeningNow Ceremonial vaccination at Valenzuela City Astrodome for reaching the 10 million COVID-19 jabs in the country with NTF and IATF. pic.twitter.com/H4hxvLabPd

There is no specific scientific threshold on how many people in a certain area needs to get inoculated to achieve "herd immunity," as it also depends on how contagious a virus is. But the World Health Organzation said that "a substantial proportion of a population" would need to be vaccinated, which could be anywhere from 80% to 95%.

Here's a look at how different local government units in Metro Manila, which is one of the government's focus areas, are faring so far in their COVID-19 vaccination campaigns. 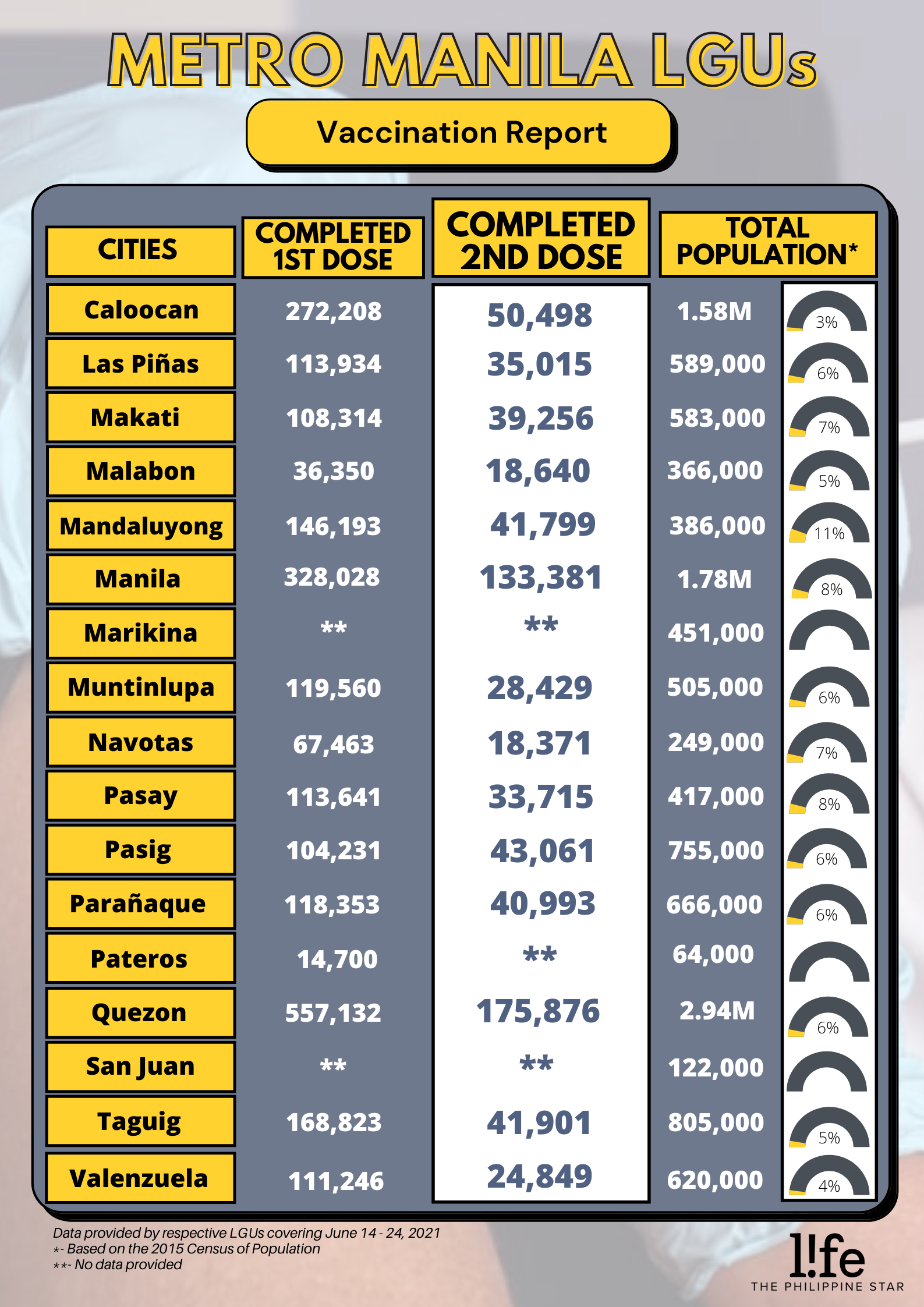 The city of Mandaluyong under its “Mandavax” program administered 187,992 doses as of June 23. A total number of 146,193 received their first dose, while 41,799 completed two doses, accounting for 10.82% of its total population fully vaccinated.

Pasay City recorded a total of 147,356 vaccines deployed to the city’s vaccination sites as of June 23. The city government administered the first dose of vaccines to 113,641 people and 33,715 for the second dose or 8.1% of its total population.

As of June 24, the city of Manila under Mayor Francisco “Isko Moreno” Domagoso inoculated a total of 524,623 people, after recording an all-time high of 35,572 vaccinations administered last June 22. A total of 133,381 Manilenos, or 7.5% of the city's total population, have already been fully vaccinated.

Navotas, under the "Navobakuna" vaccination program, has already inoculated 85,834 people, with 7.38% or 18,371 of its population fully vaccinated as of June 22.

The Quezon City government inoculated 733,008 of its population as of June 24, including the frontliners, senior citizens, people living with comorbidities, and essential workers. There are now 557,132 in Quezon City who received their first COVID-19 dose, while 175,876 already received their second dose, accounting for 6% of the total population fully vaccinated.

Led by Mayor Vico Sotto, Pasig City has vaccinated 147,292 individuals. Of the total, 104,231 were first dose recipients, and 43,061 have been fully vaccinated, accounting for 5.7% of their total population.

The city government of Muntinlupa under its “Muncovac vaccination program” reached 147,989 vaccine deployment as of June 23. The city government is 5.62% done with fully vaccinating its total population. There are 119,560 people who received their first dose, while 28,429 people completed their second dose.

Taguig City has administered a total of 210,724 vaccinations as of June 16, where 41,901 of which have completed both dosesaccounting for 5.21% of its total number of citizens. 168,823 of the administered vaccines were first doses.

Meanwhile, Malabon under Mayor Antolin A. Oreta III has already inoculated 54,990 of its population as of June 18. Of this figure,18,640 or 5.1% of their total citizens had been fully vaccinated.

Valenzuela and Pasig have inoculated 4.01% and 3.2% of their total populations, respectively.

According to San Juan City Mayor Francis Zamora, their cityhas already vaccinated 53,407 people as of June 21.

PH lets go of ‘herd immunity,’ eyes to inoculate 50 to 60% of Filipinos for ‘population protection’

The government initially planned to vaccinate 70 million Filipinos and achieve “herd immunity” by year-end. But the government has qualified the target following the challenges in the initial procurement and said the policy now favors “population protection” through mass immunization, which would require vaccinating at least 70% of an area's population to prevent hospitalization and minimize deaths.

Vax to the future: City mayors on innovations to fight COVID-19, and the work beyond