They are masters in organization but do rather poorly in the humanities and social work.

Pres. Rodrigo Duterte chose retired military officials to man his Cabinet, nonetheless. Speculations abound as to the Chief Executive’s reasons. Some imply the “militarization” of the state apparatus. Duterte, however, insists that the armed forces’ expertise in imposing order on our largely chaotic bureaucracy is needed at this time.

Others stipulate that it’s just another way of imposing “military rule” without the need to declare martial law. Critics are only too steadfast in contending that his choices expose Duterte’s fears of a military takeover if such might be the outcome of his war on drugs. Placing officers in key positions—with flashy salaries and retirement benefits to boot (over and above their own retirement pay in the military)—serve as an investment for loyalty well-placed.

A 'disservice'
For Dr. Antonio La Viña, former dean of the Ateneo School of Government, securing the President’s popularity among men in uniform is something to be expected of any commander-in-chief, more so an extremely controversial one.

That was clear from the very beginning,” La Viña told PhilSTAR L!fe. “He used the resources of the presidency to make sure that he would be popular not only among the officers but even the rank and file. This was smart, as his China policy and war against drugs created quite a lot of uneasiness, at least, initially, in the military. I thought he was also doing this so he could move the military on the peace negotiations with the Communists, but they were unmoved. So, he decided to side with the military and abandon the peace talks at great cost to the country.

While there is nothing inherently or legally amiss in appointing retired military officials in the service of a civilian government, as Article XVI Sec. 5 (4) of the Constitution only bars participation in public service for those still in active service, La Viña stressed that working for government takes skills which must fit top-level positions to the T. To rank high in the chain of command is not enough. 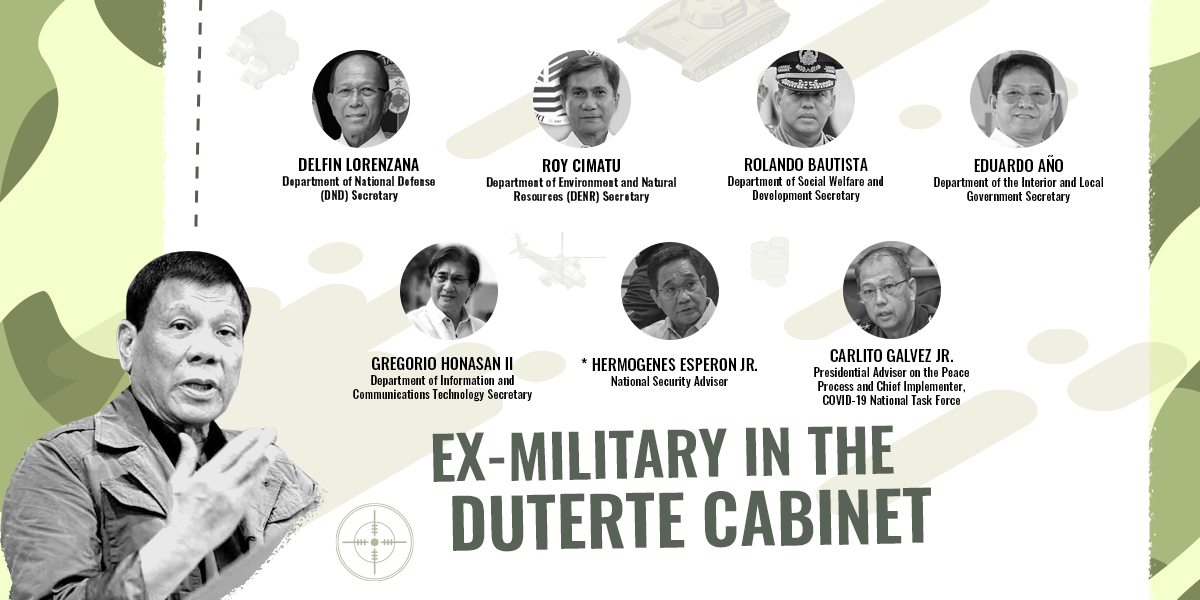 It is also highly likely that utilitarian motivations figured in the President’s choice of uniformed combatants, what with officers working as his “utility” or “errand” boys in the fight against Covid-19. That’s the Commander-in-Chief putting the command chain to his advantage.

La Viña, however, stressed that the President’s choices may have been restricted to his earlier connections in Davao while serving as mayor. This left him with very little to go on as per capable people to assist him in his Cabinet. The military and police from Davao City naturally became his pool.

“If I recall right, the first military man to serve in the presidential cabinet was Ruperto Kangleon during the Roxas administration,” Bello told PhilSTAR L!fe, “if we consider that administration as the first post-formal independence administration. Ex-guerrilla leaders and military men often occupied the post of Secretary of National Defense in succeeding administrations.  So Delfin Lorenzana is simply the latest military appointee to that post.  But as for other cabinet positions, as a rule, they've been filled with civilians for most of our post-war history.”

Bello believes that after having been socialized in quite a different environment, military men tend to be authoritarian in their approach to public service. They generally lack the “appreciation of the give and take of democratic politics,” he said, a trait which makes them extremely different from their civilian counterparts. 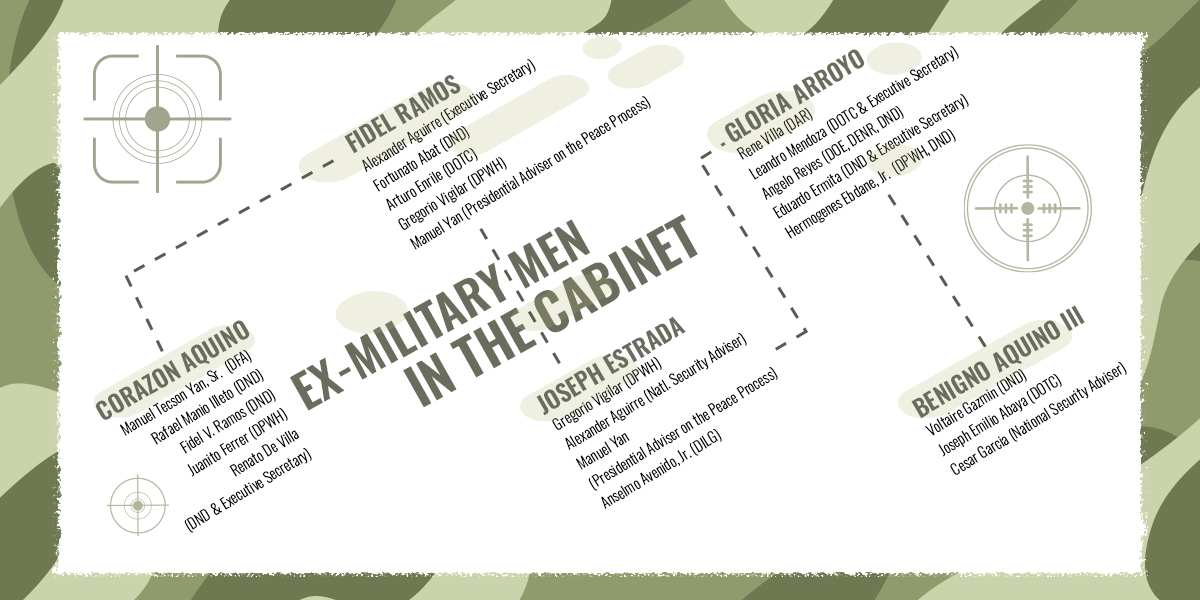 “They do have one thing in common with civilian politicians, though,” Bello said, “as shown by the Philhealth scandal and other scandals in the past: they're vulnerable to corruption.  Some, though, lack the finesse of corrupt civilian operators.  Just to cite an example, remember the ‘Eurogenerals’ during the Gloria Macapagal-Arroyo administration.  Only a stupid military man would have stuffed those thousands of euros in a suitcase and not expect them to trigger an alarm by electronic sensors during baggage inspection at the Moscow airport.”

While it’s a common enough custom to regard men in uniform as idealists in the main, Bello believes some are no less susceptible to the dross around them. If there’s anyone who knows this, it’s the young, lowly soldier who would have to put up with the spun-out-of-hand tradition of corruption within the ranks of the Armed Forces of the Philippines.

Corruption begins very early, when one is still a second or first lieutenant, and expands geometrically as one goes through the ranks and gets assigned to different provinces and regions. Idealism dies very early in the AFP.

“As for ‘lowly soldiers,’ they should not be underestimated,” Bello explained. “Within the AFP, words spread very fast as to who are the ultra-corrupt officers who are on the take in almost everything.  Corruption begins very early, when one is still a second or first lieutenant, and expands geometrically as one goes through the ranks and gets assigned to different provinces and regions. Idealism dies very early in the AFP.  With some, it is beaten out of them with their very first experience being hazed at the Philippine Military Academy.  Of course, there are exceptions. Enlisted men are smart, and many are very cynical about the people who command them, especially if they are stingy in sharing the loot with them.”

The President’s choice of military officials seems to be an indictment of civilian government’s alleged inability “to get things done”. Duterte himself had said it time and again. This, Bello said, has had a demoralizing effect on some civilian cabinet members. He recalled one civilian Cabinet member who was made to feel he was a second-class citizen amid a slew of military officials within the President’s inner circle.

“My worry is not only the militarization of the cabinet, which brings with it an impatience with democratic processes,” Bello said, “but with the overall degeneration of its collective IQ. There's one memorable saying of Groucho Marx: ‘Military intelligence is a contradiction in terms.’  When you look at the antics of General Antonio Parlade, the head of that ragtag committee to redtag people, it's enough to turn you into a Groucho Marxist.”

Military politicization
Seasoned journalist and author of The Battle of Marawi, Criselda Yabes, lays down a very interesting theory on why military top brass agree to work in the President’s Cabinet: a dearth of possible employment for retired military officers.

“They [the officers] know that when they retire, they have nothing to depend on,” Yabes said. “That’s why during the early years of the Marcos regime, these officers choose to study, learn skills other than those they received in the military academy. This enabled them to hold jobs after retirement.”

The politicization of the military may have been sparked by the growth of factions within the ranks as a guarantee for promotions. As such, officers were compelled to cozy up with the powers that be. This opened the doors for military officers to begin playing with political fire.

A ‘superfluous excellency’: The historical troubles and travails of the Office of the Vice President

For Yabes, the marriage between civilian government and the military may have started the moment former Pres. Corazon Aquino raised the hand of Gen. Fidel V. Ramos as her presidential candidate. “It was the start of acknowledging that it was okay to have a military man to run the country,” Yabes said.

While the author believes that Aquino did not particularly have this purpose in mind when he chose Ramos, the former President may have thought “Ramos was the only guy that could save ‘democracy’ and not turn the country into a military state. Otherwise, Ramos would’ve joined the several coup attempts during her term. Aquino made her choice even though she never trusted the military. Huge paradox there. And it was in Ramos’ government when officers began occupying secondary and tertiary positions. If you look back, this was also the time when officers started running for higher office. Take Gringo Honasan.”

The seeming ‘militarization’ of the bureaucracy scarcely holds promise now that we’re in the thick of surviving the ‘new’ normal. Our situation demands more brains than boots on the ground. The armed forces function under a different paradigm, one predicated on unquestioning obedience, loyalty and hierarchy.

Things began to take a sharp turn for the worse when a significant drop in competence among civil servants started to surface. Incompetence, as well as red-tape, led to the civilian government needing the organizational skills of military officers. “It’s really more like putting things in place, at least, in the beginning,” Yabes said. “But over time, it all turned political. This is where they learned patronage politics and enjoyed another set of salaries over and above their retirement pay. This should not be the case.”

While the detour hardly bothered the low-ranking soldier as long as systems of promotions and salaries are allowed to take their course, Yabes was quick to add that it becomes troublesome only when lower ranking officers begin to see the leap to Malacañang as just another crack at gaining huge amounts of money.

Short stints in office, if left unchecked, often lead to diminishing leadership quality over time, which becomes a disservice to both institutions. Yabes nevertheless pointed out that the military will always remain as a hierarchical institution, thus soldiers will have to simply follow orders.

The seeming “militarization” of the bureaucracy scarcely holds promise now that we’re in the thick of surviving the “new” normal. Our situation demands more brains than boots on the ground. The armed forces function under a different paradigm, one predicated on unquestioning obedience, loyalty and hierarchy.

What our situation demands is a healthy exchange of sundry ideas, scientific know-how, and a broad spectrum of disciplines—social and economic, not the least—if Filipinos were to stay alive amid the threat of COVID-19. Cabinet fatigue, we don’t need.