University of the Philippines Cebu announced on July 10 that it is allowing graduating students to dress in accordance to their SOGIE during its 83rd commencement exercise on July 29.

In a Facebook post released by the university's student council on the same day, UP Cebu said that it is authorizing its graduating students to "wear their preferred attire in accordance to their lived identities in terms of sexual orientation, gender identity, and expression."

The institution elaborated, "All graduates will not be obliged to conform to heteronormative standards and there is also no need to ask permission from the administration or prepare a letter when doing so. As long as the graduation guidelines for academic costumes, such as color schemes and lengths, are still observed, graduating students may dress themselves how they see fit."

This comes two days after UP Visayas devised a policy requiring graduating students to wear "heteronormative standards" of clothing during an orientation on Friday, July 8.

The Iloilo-based campus then obliged members of the LGBTQ+ community who do not want to conform to the "standard" to  write a letter describing their gender expression "in order to be able to dress according to their SOGIE'' and "preserve the solemnity of the event."

UPV Chancellor Clemente Camposano later clarified that the university does not intend the policy to be discriminatory, but merely to urge students to notify them if they will attend the event in their preferred attire. The UP Visayas commencement ceremony is scheduled for July 20.

Announcement of chosen names on stage

In addition to allowing graduates to march dressed in outfits based on their SOGIE, the student council of UP Cebu, meanwhile, has called on the university's administration to announce the students' chosen name and preferred titles during its upcoming commencement exercise.

In a letter sent to UP Cebu Chancellor Leo Malagar on July 11, the student council urged the university's administrators to announce the students' chosen names and preferred titles in accordance with the "6th resolution of the 52nd General Assembly of Student Council (GASC) which states, 'A resolution calling for a system-wide campaign to call for an affirmance of transgender and gender non-conforming names, pronouns, and titles policy.'"

"Thus we call for the administration to continue to uphold this policy so as to not subject their graduates to discriminatory measures,” the letter stated.

DepEd's recognition of the LGBTQ+ community

Meanwhile, the Department of Education-National Capital Region (DepEd NCR) stepped up in recognizing the SOGIE of the LGBTQ+ community, with the release of a memorandum on June 23 prohibiting schools from limiting their students' gender expression, including the attire they wear during end-of-school rites.

It reaffirms DepEd Order No. 32 series of 2017, which establishes a gender-responsive environment with "zero-tolerance for all forms of discrimination, violence, and abuse." 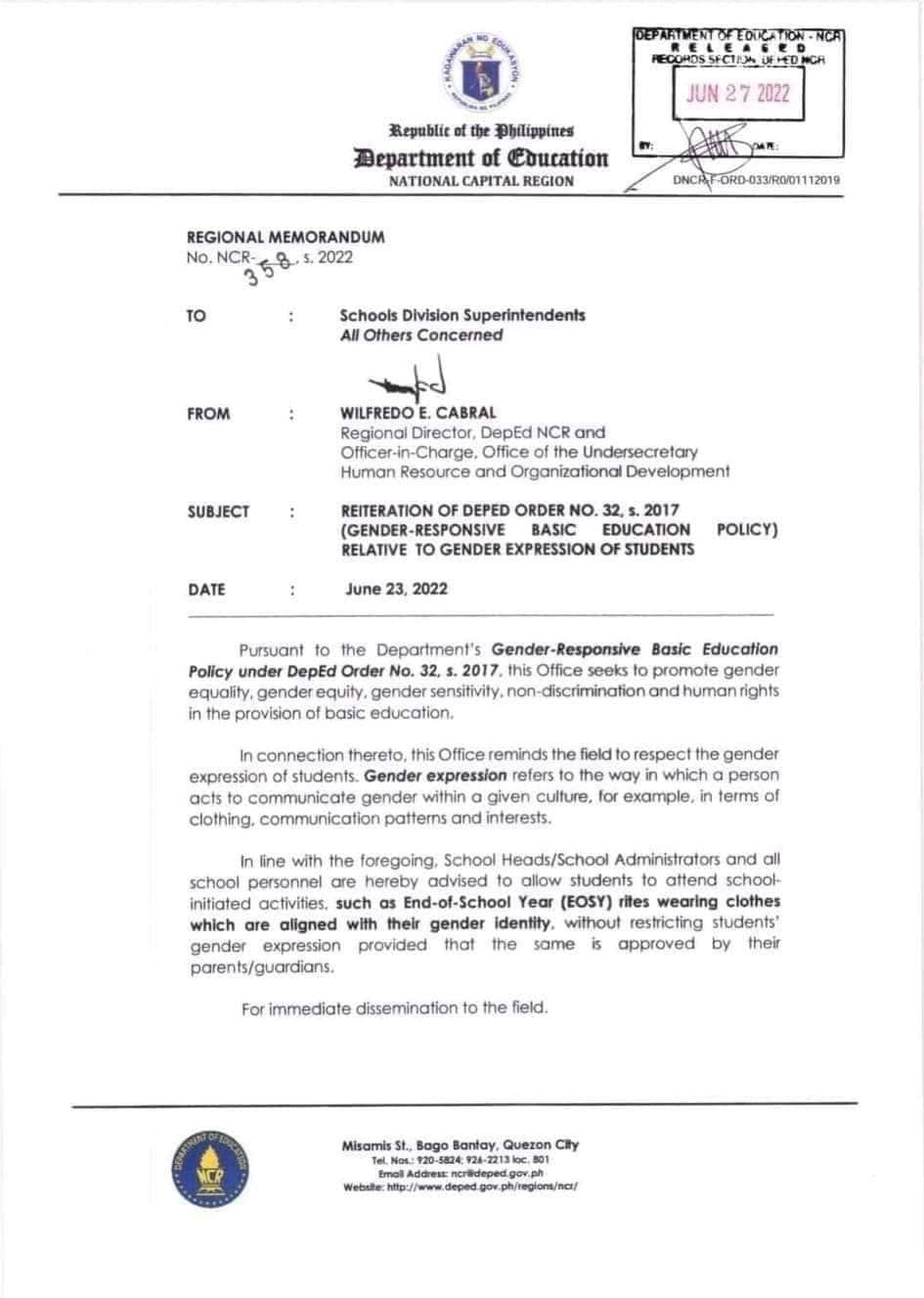 DepEd released the memorandum after Miss Trans Global 2020 Mela Habijan took to social media to express her dismay about the exclusion of four graduating transwomen from their graduation ceremonies for not following the school's traditional dress code.

According to Habijan, the graduating students Nicole, Kendi, Jade, and Rey were prohibited from attending the affair in dresses and were required to cut their hair. The beauty queen then gave the students a graduation photoshoot where they can be their true selves.

Habijan uploaded the finished product on social media, with the post gaining 54,700 likes and 9,821 retweets as of writing.

(Editor's note: This story was updated to highlight UP Cebu's approval of its non-heteronormative dress code for its upcoming commencement exercise.)