Many have called for it before, many have implored Twitter co-founder and CEO Jack Dorsey to suspend Trump’s account as he tweeted conspiracy theories throughout his four-year presidency, and false claims on the US presidential election since November 2020.

Twitter locked Trump’s account for 12 hours and removed three tweets following the siege of the US Capitol by Trump supporters as Congress and Senate began the formal counting of votes by the US Electoral College.

“As a result of the unprecedented and ongoing violent situation in Washington, D.C., we have required the removal of three @realDonaldTrump tweets that were posted earlier today for repeated and severe violations of our Civic Integrity policy,” Twitter said.

As a result of the unprecedented and ongoing violent situation in Washington, D.C., we have required the removal of three @realDonaldTrump Tweets that were posted earlier today for repeated and severe violations of our Civic Integrity policy. https://t.co/k6OkjNG3bM

Inflamed by Trump’s rhetoric, the pro-Trump rally in Washington, DC—some of his supporters were armed and carried the Confederacy flag— turned into insurrection as they breached the Capitol security and occupied the Senate floor.

Elected officials were evacuated and US Vice President Mike Pence, who is presiding over the joint session, was taken to an undisclosed location. The insurrection also resulted in the death of one woman who was shot in the chest (four people have reportedly died following the siege). The National Guard was activated after they breached the building.

Twitter’s policy states that users “may not use Twitter’s services for the purpose of manipulating or interfering in elections or other civic processes. This includes posting or sharing content that may suppress participation or mislead people about when, where, or how to participate in a civic process. In addition, we may label and reduce the visibility of Tweets containing false or misleading information about civic processes in order to provide additional context.” 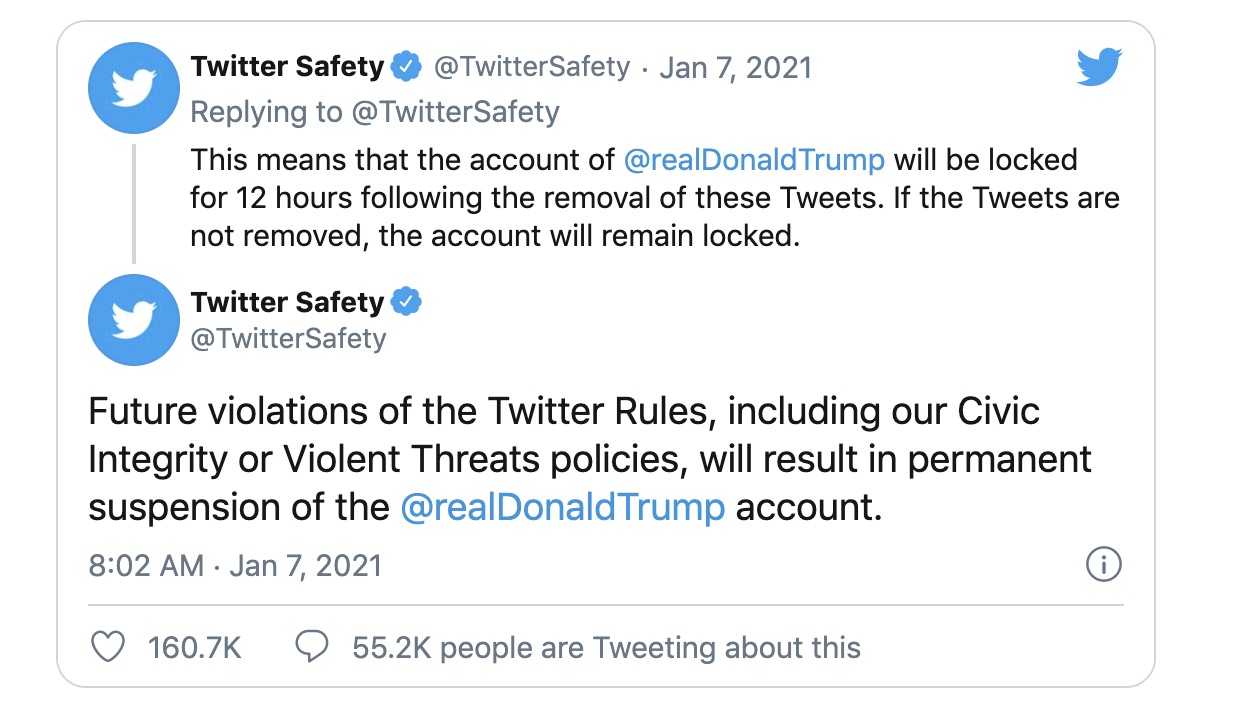 “This means that the account of @realDonaldTrump will be locked for 12 hours following the removal of these Tweets. If the Tweets are not removed, the account will remain locked.

We've assessed two policy violations against President Trump's Page which will result in a 24-hour feature block, meaning he will lose the ability to post on the platform during that time.

The heart remembers: Reflections on memory and forgetting