It didn’t take long for people online and other celebrities to close ranks around Angel Locsin after news of her unflattering portrayal in a learning module that described her as an “obese person” surfaced.

The Department of Education (DepEd) issued a statement after the issue blew up, but Angel found the statement wanting and urged DepEd to be accountable and for the teacher to apologize.

Angel Locsin says DepEd must be 'held accountable' for body-shaming

The incident struck a raw nerve for many people and elicited expletives in social media as people expressed outrage at the incident.

In a Rappler Instagram post about the incident, celebrities Bubbles Paraiso, Angelica Panganiban, and Moira Dela Torre all spoke up for Angel.

Moira in particular spoke how she herself became a victim of body-shaming.

“Hi, DepEd. Please stop teaching children how to judge people and instead, teach empathy and compassion. I, myself, am a victim of body shaming and my weight is what it is because of a medical condition and not at all caused by eating fatty food or sitting on the couch all day. It also isn’t too late to learn more about kindness, like how Ate Angel advocates, so we can pass on good values to children,” Moira said. 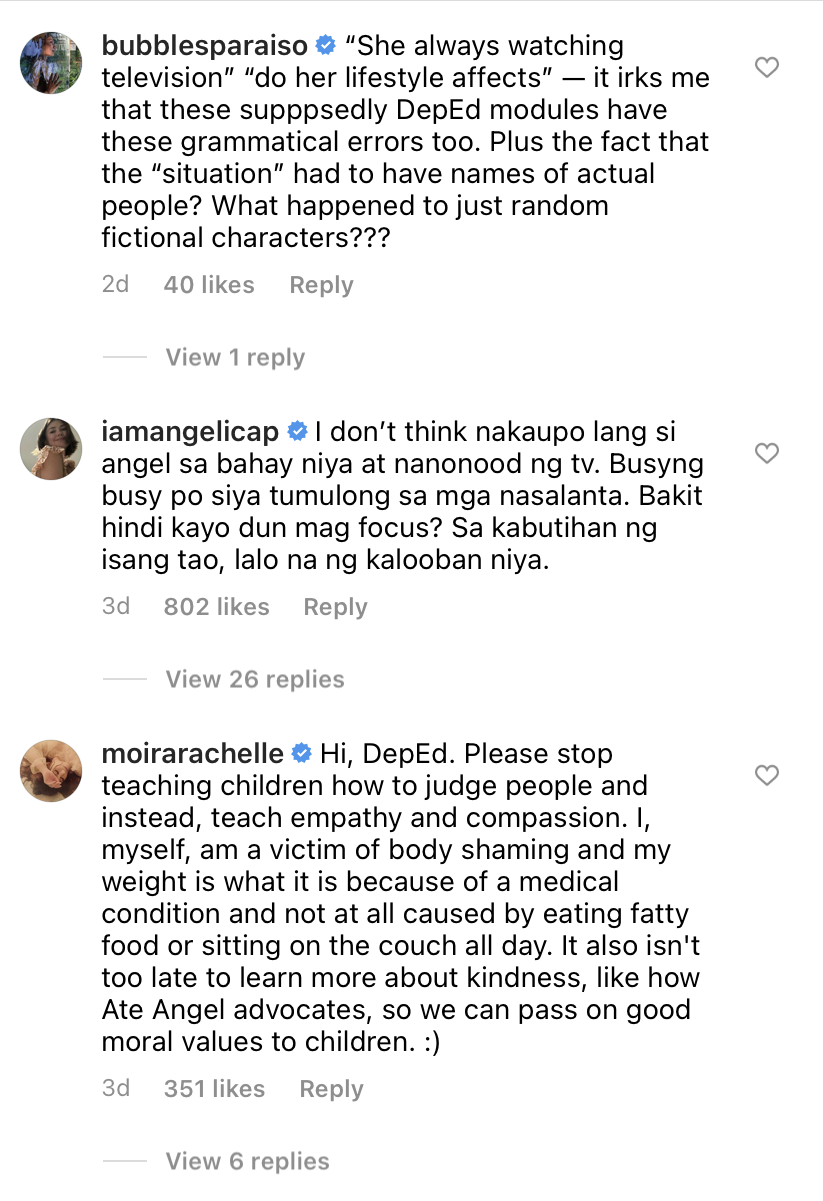 In a Twitter chat with fans last July, Miss Universe 2018 Catriona Gray shared her insights into what body-shaming could do to a person, saying that she also had a personal experience on the matter.

"Bodyshaming is hurtful and should never be tolerated. If anyone reading this too has been bodyshamed, I know how it feels. I'm sorry you've had to experience that. But know that you are more than your appearance. You are a capable, unique and worthy person. And you are never alone," Catriona said in response to a question.

Bodyshaming is hurtful and shld never be tolerated. If anyone reading this too has been bodyshamed, I know how it feels. I'm sorry you've had to experience that. But knw that you are more than your appearance. You are a capable, unique and worthy person. And you are never alone.

Catriona also gave advice to a fan who asked how to deal with issues regarding her weight.

"I used to get body-shamed when I went on my 3-year hiatus for not having that Asian, stick-thin body (for an Asian like me), and many women like me get affected by this mentally, emotionally and physically. Going through a pandemic and realizing the big picture issues of the world, I realized life is to be celebrated, and enjoyed... Like, why would I choose to develop an eating disorder over losing all the extra weight healthily?" said KC Concepcion.

Further back in time, comedian Vice Ganda also caught flak in 2013 after a bit involving broadcast journalist Jessica Soho that commingled a fat joke and a rape joke — no-go zones that are already radioactive on their own. Vice Ganda then reaped the whirlwind, from a whole host of netizens and personalities from GMA-7, leading to an on-cam live apology.

Beyond the hackneyed comedy trope, body-shaming, or fat-shaming to be specific, has also been quite a common fixture in Philippine life, as anyone who was fat during his/her teens would attest. The pejorative terms are numerous —taba, tabachoy, baboy, balyena, and dugong among others. It's now called body-shaming, but the classic term is just bullying.

Aside from the offensive terms, there is also the casual Pinoy greeting —"Tumaba ka ata ah?" (It looks like you've put on weight). This dreaded remark, which is sometimes used by the older set during family reunions, even led to the creation of this shirt. 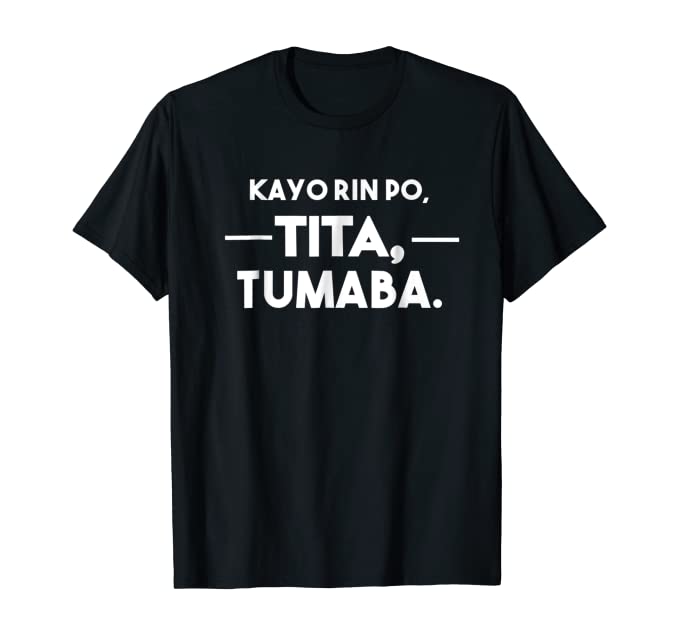 To be sure, body-shaming is not unique to the Philippines. In the US, there is even a whole sub-category of "yo mama is so fat" jokes. Last year, comedian Bill Maher even raised the banner of fat-shaming as a supposed cure to the raging epidemic of obesity in the US.

"Fat shaming doesn’t need to end, it needs to make a comeback. Some amount of shame is good. We shamed people out of smoking and into wearing seat belts. We shamed them out of littering and most of them out of racism. Shame is the first step in reform,” Maher said in his show, without specifying when exactly fat-shaming ended for it to warrant a comeback.

English comedian James Corden replied to Maher's video in his own show, saying that fat-shaming never went out of style, and never actually helped at all.

"A lack of shame is not the issue here. If making fun of fat people made them lose weight, there will be no fat kids in school and I will have a six-pack by now," Corden said.

Corden said the obesity issue is a complex one and affects many people in many ways due to various causes, that could be better addressed by better access to healthy food and healthcare for everyone.