On Wednesday, Feb. 10, the other half of the band's twin vocalist shared a series of tweets urging Filipinos to respect the LGBT community and stop assuming someone’s gender based on their fashion. 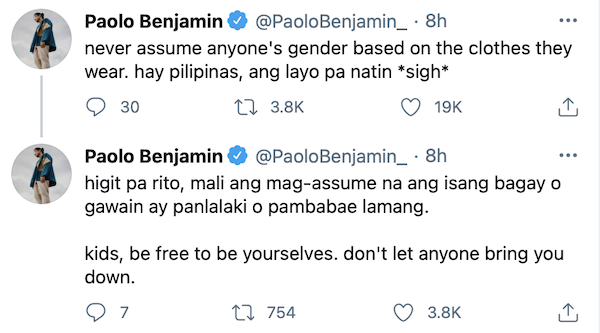 Benjamin also urged Filipinos to stop using the term “bakla” or gay as a criticism.

“Panghuli, sana'y makamove-on na tayo bilang bansa sa paggamit ng 'bakla' bilang insult,” he stressed, adding, “As a heterosexual male, I may not be in the place to speak for them but, I will fiercely fight for our LGBT friends and listeners.”

“You are valid, accepted and loved. Pilipinas, let's grow up!” he reiterated.

Benjamin uploaded his tweets after he shared two photos of him on Instagram on Feb. 8 promoting gender-bending fashion. One of the photos showed him wearing a psychedelic knee-length dress paired with boots, while the other pictured him in khaki pants, leather shoes, and a shirt. “Be comfy on your own skin,” he wrote on the caption.

While many of the singer’s followers lauded him for “breaking gender stereotypes” there was still one who commented, “bakla hahaha.” 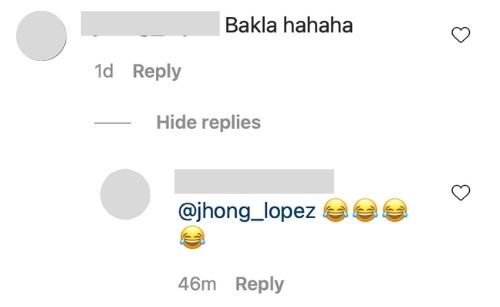 This is not the first time that Benjamin was lambasted for donning gender-fluid clothes. On Nov. 30, 2020, he uploaded a photo of himself on Instagram wearing another dress printed with pink leaves. His caption says, “Break gender stereotypes.”

Ben&Ben have always been supportive of the LGBTQ community. In June 2020, the band supported a campaign called “BBs Pride Home” organized by their fans in time for Pride Month. It was a safe space for their fellow listeners to open up and learn through virtual talks, discussions, and performances celebrating everyone’s individuality.