Broadcast journalist Korina Sanchez didn’t mince her words as she defended herself against concerned netizens who called her out for taking the anti-parasitic drug Ivermectin.

Sanchez caught the attention of netizens when she shared on Instagram that she’s now vaccinated. In the caption, she revealed that she takes the anti-parasitic drug Ivermectin “every two weeks.”

Netizens didn’t hesitate to express their concern over Sanchez’s post.

Instagram user @april_jo1 advised Sanchez to be “responsible” with her posts. However, the broadcast journalist retorted that she has different beliefs. 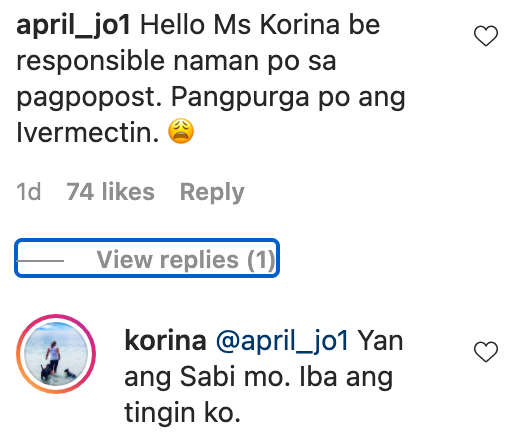 @seffffc commented on the broadcast journalist’s post, stating that the drug is for treating parasitic worms. Sanchez insisted that the netizen is wrong, but he’s free to believe what he wants. 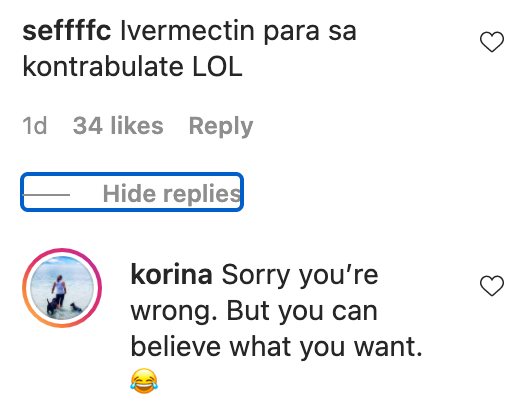 On the other hand, @mcsilva278 praised the journalist for taking the drug. 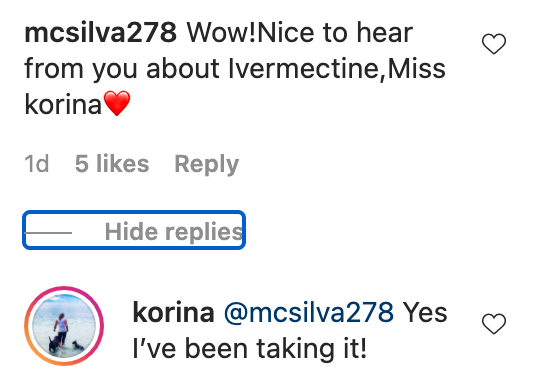 Jericho stressed that Ivermectin does not cure COVID-19, expressing concern at how Sanchez’s platform can misinform the public.

A comment on Korina’s IG post and her answer. See what her influence can do. Again, Ivermectin DOES NOT work against COVID19. pic.twitter.com/YJeB5iYfhP

crazy irresponsible - she has a huge platform and she promotes something that has been proven by research as not effective against COVID and as potentially harmful if used misguidedly. +

As of this writing, there are six hospitals that have been granted a “compassion special permit” by the Food and Drug Administration (FDA) to use Ivermectin as a treatment for COVID-19 patients. Despite this, the FDA does not guarantee that Ivermectin is safe and effective to use.

The Healthcare Professionals Alliance Against COVID-19 also warned the public against the use of Ivermectin as a COVID-19 treatment. The healthcare group also advised medical professionals to be “responsible for the unintended effects of our actions, especially if they can lead to confusion.”

The Philippine College of Physicians (PCP) stressed in a May 2021 virtual press briefing that there’s no scientific verdict on the use of Ivermectin as a cure against COVID-19.

On the other hand, the World Health Organization (WHO) debunked claims that Ivermectin can be used to treat COVID-19 patients. The health agency also stressed that such “kind of misinformation” only impacts the “capacity of national governments” to control the pandemic.

WHO stresses, yet again, that ivermectin cannot cure nor prevent COVID-19

Japanese man given $360,000 of COVID aid by mistake arrested