Style Living Self Celebrity Geeky News and Views
In the Paper Shop Hello! Create with us
Everything's Fine

Filipinos tend to make light of suffering, especially one brought about by romance. They’d pepper their sentiments with charotisms, memeifying unrequited love, ghosting, and breakup just so grief becomes tolerable.

But what if grief manifests itself when, say, burning fallen leaves, taking three-hour bus rides, or eating “jolly” spaghetti? It’s exactly what Jade Mark Capiñanes examines in his newest book How to Grieve.

As its title suggests, How to Grieve is a collection of 19 short stories that weighs in on the ever-universal feeling during the most random and quirky of situations, like eating and counting kwek-kwek daily post-breakup, still caring for a cactus named Chichi once shared with an ex, and using a former sexual partner’s toothbrush, encapsulated in first- and third-person narratives, dialogs, and allegories that are all arguably black comedy.

'Mars, May Zombie': YA novel about a gay teenager in post-zombie apocalypse PH debuts at #MIBF2022

For posterity, Capiñanes won the 2017 Palanca Awards for his essay, “A Portrait of a Young Man as a Banak,” a rather poignant entry about the notion of home for someone with a broken family. He has since moved to writing satire on Facebook, where he boasts of over 12,000 followers, and in his other collections Vince & Kath & Derrida (2017), Nazi Literature in the Philippines (2018), and Digital Loves (2020), consolidating great literature, philosophical texts, pop culture, and current affairs. Capiñanes also once noted that he wrote How to Grieve after his breakup, making it all the more credible.

Right off the bat, he asserts in a dedication to the late psychiatrist Elisabeth Kübler-Ross that her theory regarding the five stages of grief (denial, anger, bargaining, depression, acceptance) is wrong. For Capiñanes, knowing grief—through his stories categorized into food, plants, objects, travel, and survival—comes with the realization that there are no steps nor phases.

How to Grieve has a catchy, captivating opener in “How to Eat Spaghetti,” where Capiñanes chronicles in a 10-item list a character’s grief brought about by a pasta dish. 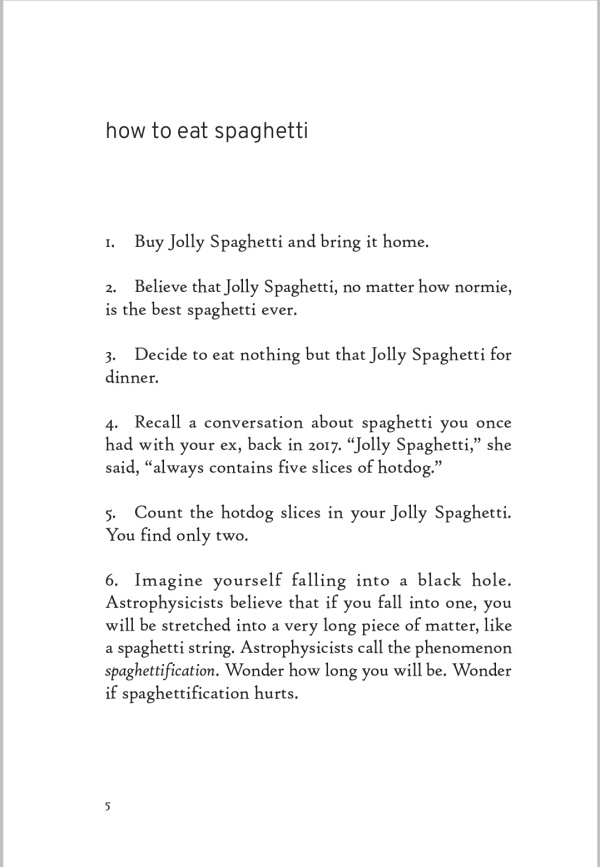 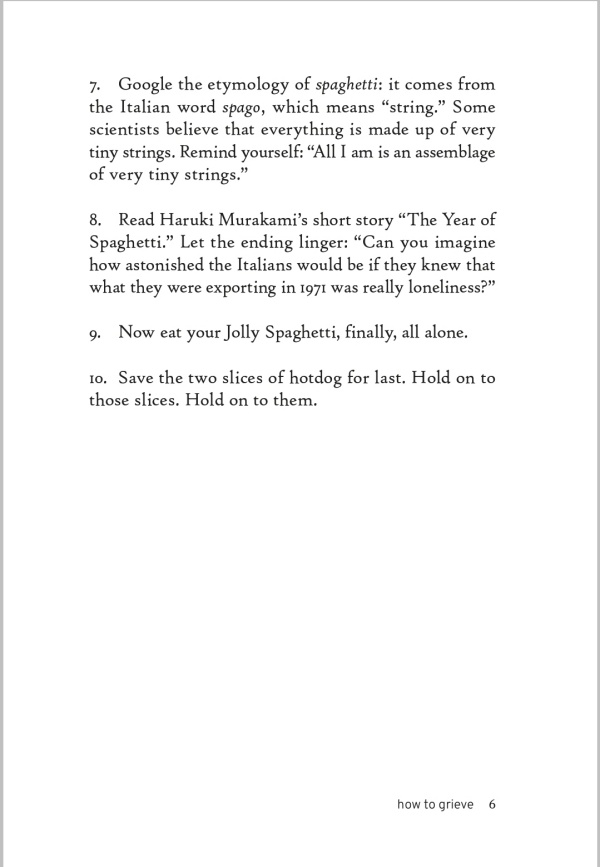 How he’s able to connect the rather mundane activity of buying a popular fast food chain’s spaghetti to the concept of spaghettification in astrophysics—and to Japanese author Haruki Murakami's pronouncement about Italians exporting loneliness in their dish—is one of the most inventive and interesting pieces I’ve read in a long while. One may never eat their spaghetti the same way again not necessarily due to heartbreak, but because they ought to remember Capiñanes’s genius with every forkful.

For the most part, he also does away with the traditional narrative structure. “How to Cross a River,” for instance, is made up of two different koans, the paradoxical riddles or anecdotes in Zen Buddhism. He also has entries written in the form of a letter, as well as a Q and A.

What’s also commendable about How to Grieve is that though Capiñanes already has a developing body of work, it stands on its own and is powerful in its own right, unlike other authors whose works appear to only make sense if one is well aware of their past writings.

It can also be seen that Capiñanes has the primary intention to connect with everybody through simple, accessible language—unlike some authors who tend to alienate readers with hifalutin words and obscure references.

Though Capiñanes’s work has a few name-drops, from Greek philosopher Zeno of Elea to controversial director Darryl Yap, the narratives don’t dwell on their mentions. (Some authors have the sickness of mentioning all the GOATs they know in their own work, even quote-bombing in toto. Good grief.) Instead, they only serve as kickstarter for Capiñanes to deliver his own points, with style and clarity. While How to Grieve draws inspiration from his very own experience and while there are several “I” perspectives, Capiñanes is upstanding enough not to use the stories in shining the spotlight on himself—a trait that certain poets, novelists, and even journalists are doing in broad daylight.

How to Grieve, though it’s pop by design, is also far from being a sellout that panders to a masa demographic “forda” mere scoring of internet points, having observed certain literary standards.

Though it tackles grief, the writing exercises sobriety and restraint, spared from being corny and cheesy. Capiñanes doesn’t spoon-feed readers and encourages them to pick up his intimations themselves, especially in the allegorical stories.

Like in real life, even the most apparent of physical actions can be so muted and can only do so much, and the deeper meaning lies on what only the self knows, or the things that were left unsaid between two individuals.

#2022MIBF: On the way to shaping a reading generation

In “How to Burn Fallen Leaves,” which I consider one of the strongest entries in the collection, readers are reminded of the semiotic concept of index (a signifier to the signified via physical relationship) and symbol (a signifier to the signified via arbitrary terms), using smoke as example. It takes off from a rhetorical question a certain “she” poses to the narrator on how they always only end up with smoke no matter how much they try to build a fire—with history and pop culture in the mix.

But sometimes in life, things have no other room for interpretation. In “How to Remember a Name,” a taxi driver asks his passenger, the narrator, name suggestions for his upcoming baby girl. The passenger gives one, albeit unspecified, and is asked whose name is it, only to dismiss it as “Just someone I know.” The driver, of course, didn’t buy it, saying, “You wouldn’t have said her name immediately if she was just someone you knew, would you?”

Capiñanes eventually addresses the elephant in the room, and though it’s expected, he doesn’t wax poetic. The story’s being under 300 words already suffices in ringing a bell among readers, and the respective but manifold recollection of names from their pasts, more or less, only reinforces the universality of grief.

As a matter of fact, How to Grieve was originally conceived in 2020, during the height of the COVID-19 pandemic which has since upended daily routines and caused millions of deaths. Coupled with today’s ever-increasing prices of goods, recurrent shortage in the market supply, and the unstable political climate, Capiñanes’s work would always be relevant since the better part of the Filipino population would always have something to grieve over.

If I may nitpick just one aspect though, it’s that How to Grieve is being marketed as fiction. As far as I am concerned, form-wise, its entries read as prose poems or short essays even.

Children and books: Why reading means winning half the battle

In any case, the genre-naming or pigeonholing is already beside the point. What’s important is that Capiñanes’s work will surely resonate with everybody, including individuals who may not necessarily be grieving, simply because of the fact that love precedes grief. (“What is grief, if not love persevering,” the miniseries WandaVision even preaches.)

How to Grieve, published by Manila-based indie publisher Everything's Fine, made its debut at the Manila International Book Fair at the SMX Convention Center, Mall of Asia Complex in Pasay, last Sept. 15. It will soon be available for online purchase on e-commerce platform Lazada. Follow the publisher on Facebook, Twitter, and Instagram for announcements, as well as other information about its previous titles.

You may also catch Jade Mark Capiñanes on Facebook.