My driver and I were cruising down a Manila road when something crossed my line of sight: a poor family having lunch along a street corner.

It was the early part of February 2013. One can still feel smidgens of cold air left behind by a largely humdrum Christmas past.

A huge blue plastic mantle was draped over what passed off as the roof of their home. Beneath the drape appeared the color red, folded and collapsed over a piece of wood that shone with yellow. The colors of our flag.

Nearby, a family of three—whom I presume as a father and his two children—sharing a simple meal. As I pointed the lens of my D90 toward their direction, the father looked away, and quite amusingly, too, the marmalade cat who lounged right next to him.

The whole image sat along a backdrop of a ramshackle house crumbling at the seams, weighed down by rusty old iron sheets, spoiled wooden panels, a mud-covered mirror and what seemed more like debris than mere discarded materials. 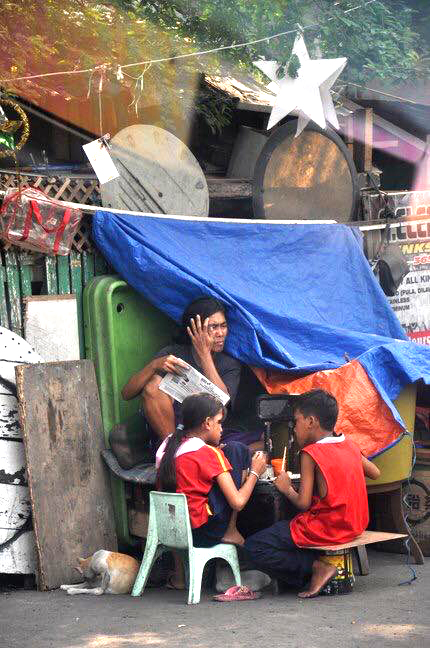 Since then, no other image of Christmas—this veritable “Belen” I call it—had remained with me each time the holiday season arrives.

It reminds me of the Biblical Jesus whose birth was signaled not only by the majestic Star of Bethlehem and the visitation of wise men from the East, but by King Herod’s dictum to massacre boys all across Bethlehem two years old and under.

It brings back images of Jesus’ parents, Joseph and Mary, on the run with the child Jesus from Roman soldiers, en route into Egypt where they hid until Herod died.

It tells me of the day when the child who was born in a manger was tagged by the powers that be as a wanted man, an insurrecto, whom the prophets of old said would one day sit as King of the Jews.

Jesus was born into a world very much like our own, fettered into submission, chained in poverty, and bludgeoned daily by laws which sprung out of the mouth of god-tyrants. Laws which, when enacted, would go to the extent of slaughtering hapless children if only to remain in power.

The Gospel according to Matthew gave the account: “When the Wise Men had left, Joseph had a dream. In the dream an angel of the Lord appeared to him. ‘Get up,’ the angel said. ‘Take the child and his mother and escape to Egypt. Stay there until I tell you to come back. Herod is going to search for the child. He wants to kill him.’ Joseph got up. During the night, he left for Egypt with the child and his mother Mary. They stayed there until King Herod died” (Matt. 2: 13-15 NIRV).

He [King Herod] wants to kill him. It’s that part of the Christmas story we refuse to tell ourselves and our kids.

And rightly so, I suppose. The “Belen” scene didn’t tell the whole Christmas story. Santa Claus, Christmas carols and silent nights hardly figured in it. In fact, if one were to believe the Scriptures, it spoke of weeping and wailing all throughout Bethlehem.

It was a snapshot of a world which refuses to acknowledge that it had gone mad with power and violence, more so when the powers that be were left unchecked to their own devices.

Jesus was born into a world very much like our own, fettered into submission, chained in poverty, and bludgeoned daily by laws which sprung out of the mouth of god-tyrants. Laws which, when enacted, would go to the extent of slaughtering hapless children if only to remain in power.

As it often happens in today’s world, the poor are left poorer with scarcely any means to get by, robbed daily of their right to a life of dignity. It’s a specter that haunts our every attempt to rise from the sludge and muck of daily living.

Lest we forget, roughly 122 children have been killed in Pres. Rodrigo Duterte’s war on drugs—most belonging to the poorest families—according to the World Organization against Torture. The group said the number here shown is, by and large, an underestimation as “relatives are often threatened by police and told not to contact human rights groups for help.”

During Jesus’ time, there were no human rights groups to speak of, let alone go to for help. That He was born in a manger, away from prying eyes, tells me how perilous it was, and still is, to be labeled an outlaw.

This is the true ghost of Christmas past: that part of the birth of Jesus where hundreds of children fell by the hands of a jealous, bloodthirsty king if only to remain in power.

Perhaps, by reminding ourselves of that dreadful day, we can halt the bloodlust in our midst by not leaving it unspoken of or unchecked. We can begin by telling our own Christmas story.