Style Living Self Celebrity Geeky News and Views
In the Paper BrandedUp Hello! Create with us
Boboy Yonzon

Launched on Sept. 29, National Heroes Day, at the spanking vast hall of the College of Fine Arts in UP Diliman, was an attractive coffee-table book that preserves the hallmarks of a political campaign which, despite falling short of its goal, succeeded in stoking unprecedented creativity.

Before the ink dried on the numerical outcome that sealed what arguably remains as a disputed election, artist/writer/designer Hugo Yonzon III or “Boboy” conceived of curating the images, verbal and musical compositions, and sundry other artistic efforts that would memorialize the Kakampinks’ fevered efforts. 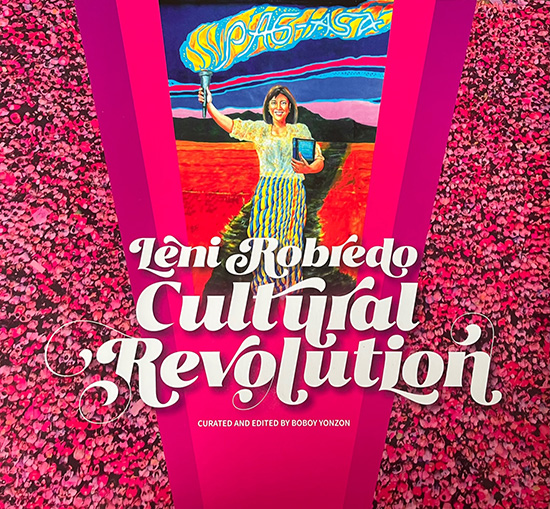 Less than four months later, the result is Leni Robredo Cultural Revolution, all of 244 pages in full color, with the hardbound edition selling briskly at P3,500, and softbound copies at P2,200.

Over 150 invitees came to the book launch, which saw former VP Leni feted with musical numbers and a reading from the book’s pages by Shamaine Centenera Buencamino. In response, the guest of honor admitted to her excitement when she learned about the book. It’s a medium to tell the truth, she said, adding that she’s still amazed at all the energy and creativity that had been unleashed.

It was then announced that she would have to excuse herself soon, since she had another scheduled activity, but that she could stay briefly to sign only a copy each for those who would line up for the privilege. That signing and photographing session took well over an hour, given the graciousness and patience of the adored one.

If People Power was just a romantic notion 36 years ago, the label has become real and pragmatic, but no less dreamy.

What she wrote on the page where an essay of mine starts — “Quo Vadis, Pinas?” as the Epilogue — certainly made my day, and more, as an eternal fanboy: “Dear Krip — Isang malaking karangalan makasama ka sa laban para sa bayan.”

The book collects a varied assortment of Kakampink creativity involving more than 200 contributing artists and writers. The starting Murals section alone goes on for 55 pages, with documentation on walls and floor areas from all over the country. The next sections include “Tees, Memes and Merchs,” “Comics, Cartoons, Pop Art,” “Portraits and Poems,” “Paintings and Sculptures,” “Essays,” “Costumes, Dances & Street Designs” and “Songs & Gigs.”

The poems include some that were previously anthologized in the best-selling Pink Poems para kay Leni published by San Anselmo Press — by Jose “Butch” Dalisay, Abdon N. Balde Jr., Yonzon himself, and this writer, along with new ones by Beverly Wico Sy and Celina Cristobal.

San Anselmo Press publisher Marvin Aceron calls it the volume that bookends the May 2022 election, and one that may signify or usher in “the exciting part.”

“This book … is meant to be a visual document of the hundreds, if not thousands, of artworks and other creative outputs that were inspired by the presidential run of Leni Robredo. … When she said she had no resources nor machinery, the people responded quickly. We will pick up the tab, they seemed to have said a number of times. In an ironical symbiotic relationship, they said: lead us and share us your vision and we will show you the way.

“The people directed the color, the tempo, and the tone. Never has this happened before. … If People Power was just a romantic notion 36 years ago, the label has become real and pragmatic, but no less dreamy.

… “The magnitude of creativity was profuse and impressive, if not overwhelming. As we gathered materials before the elections reached its crescendo, the creations kept on gushing forth. They seemed unceasing, spurting from a hitherto untapped fresh and wealthy spring.

… “For now, may we present with shared pride a glimpse of that phenomenal time when a common and widespread cause resulted in movement, fueled by hope and patriotism.”

Leni Robredo Cultural Revolution is published by the Onyx Owl, curated and edited by Hugo D. Yonzon III, and designed by Ricky Velarde, with research by Neenah Vela.

As of this writing, the book has sold out and is on its second printing. Those who wish to have a copy are advised to wait for an announcement in October when new copies become available.

ALFRED A. YUSON, The Philippine STAR

Alfred A. Yuson a.k.a. Krip has authored over 30 books of poetry, fiction, essays, children’s stories, translation, travel and biographies. Among his literary distinctions are the SEAWrite Award and Gawad Balagtas for lifetime work, as well as the Gawad Dangal ng Lahi from the Palanca Foundation, which had earlier installed him as a Palanca Hall of Famer.

A Tertulia and Tinio

The reality and fantasy of aging gracefully