“It was a bright, cold day in April and the clocks were striking thirteen.”

What was true in George Orwell’s 1984 was also true in 1986, with one particular exception: it was mid-February and the tail end of the amihan had earlier taken refuge among the boughs and fronds of nearby trees as the winds bid the Christmas chill farewell.

I was 22 going 23 that year, totally restless, altogether flustered by the way things were going in my life as an out-of-school youth. I opted to take the freelance writer’s road if only to have a feel of what it was like to live the dream.

Something larger than this infinitesimal existence was, however, going on in the backdrop: rumors of hundreds of thousands of people flocking to Camp Aguinaldo within minutes of the behest of the Archbishop.

Before the Arab Spring, before the Tiananmen Square Protests, way before the Yellow Vest Movement in Paris and Hong Kong’s Umbrella Revolution, Filipinos launched People Power.

If I remember correctly, it was the day Jaime Cardinal Sin, Archbishop of Manila, made a call over the radio: to protect rogue military officers who bolted from the Marcos regime and holed themselves up in the military camp, awaiting retaliation from the dictator’s loyal armies.

The camp, located along Epifanio de los Santos Avenue (EDSA), was a good 24.8-kilometer road distance from where I lived south of the metro. After having heard the call, I lost no time prepping a duffle bag packed with extra shirts, socks, a couple of sandwiches, a canister of concentrated Sunny grape juice, some water and packs of salted peanuts, and a couple of books for the trip ahead.

Curious as any cat lost in unfamiliar territory, I did what any pain-in-the-neck young man was expected to do: make my way to the door.

See, the home I knew was anything but a wellspring of resistance. My maternal grandfather was a loyal devotee of the Marcos regime. He worked as a crony architect-contractor whose tens of millions came from projects stretching from the Cultural Center of the Philippines, Folks Arts Theater and the Philippine International Convention Center to the Batasang Pambansa (Congress).

No word in defiance of Marcos was ever spoken at our dinner table, much less with guests around. This contributed to my rather miserable ignorance in matters pertaining to martial law atrocities. My father, largely secretive of his dealings with rebels, went on exile in the United States as a wanted man on the eve of the declaration of martial law.

Thanks to underground newspapers, I grew up with dissent as breakfast fare on my way to interviews each day.

While the whole party atmosphere may have assisted in veiling, if only for a brief moment, the clear and present danger of Marcos’ tanks making their way to the camp, it was the most beautiful thing to stand in the middle of it all.

My mother naturally said no.This left me little choice but to defy her orders. But she knew even then that not even a whole army of kin and uncles would be able to stop me from making the journey.

It was, for what it was worth, a moral venture, one I had to take if I were to make sense of where this nation was heading. I needed to see it happen. I grabbed my stuff and took a bus to Ayala Avenue, and from there, walked the whole stretch of EDSA to the aforementioned camp.

With the exception of a couple of rather hurried observations, one being throngs of people stopping cars and asking the passengers to join the hike to EDSA, everything was peaceful. In fact, the whole scene buzzed with an exceptionally joyous clime. Strangers spoke to each other, sang tunes together like we all knew one another from a different lifetime.

I recall being invited by a poor family whose jeepney was neatly parked along Guadalupe Bridge. They were handing out cold drinks to passersby for free, poured into tall white plastic cups while their speakers blared a Kenny Logins hit single. It felt good to help them in their little errand. 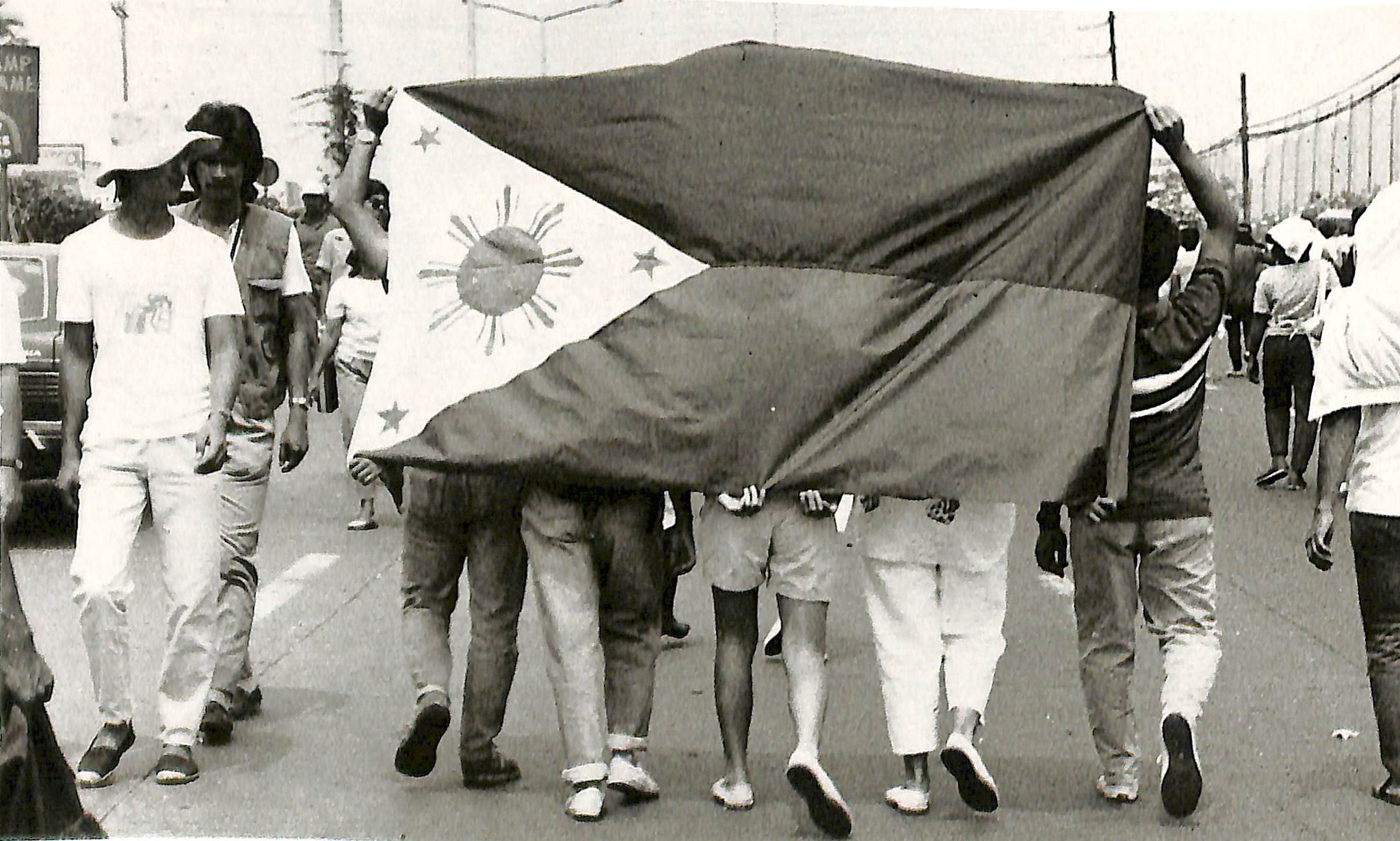 The hours-long walk was anything but exhausting. I’ve never seen anything like it: people from all walks of life, in the hundreds of thousands, daring to tell the dictator “enough is enough”. Many who brought along their radios were tuned in to Radio Veritas where the call of the Archbishop of Manila was being replayed:

“If any of you could be around at Camp Aguinaldo, to show your solidarity and your support, in this very crucial period, when our two good friends have shown their idealism, I would be very happy if you could support them now. I would only wish that violence and bloodshed be avoided.”

My arrival at the gates of Camp Aguinaldo was everything I had hoped it would be: Filipinos chanting slogans, singing, dancing, and delivering their short speeches. It was a surprisingly happy time despite the threat that hung over our heads.

Several groups went around handing out snacks and drinks for free. I recall an ice cream man who wore a cardboard sign across his chest: FREE. It was a statement of profound significance to all who graced the event.

All of the 35 years that have passed from then till now will never erase what has forever been etched in the minds of those who witnessed it: that it was possible to depose a strongman.

Teenagers sat in corners with their guitars, while others prayed, danced and awaited the rumored arrival of tanks. Young couples took the whole event as an excuse to have a date. Mothers and fathers played with their children while the throng sat along the stretch of EDSA like it was Christmastime.

It was a rendezvous with destiny millions of Filipinos wouldn’t miss for the world.

While the whole party atmosphere may have assisted in veiling, if only for a brief moment, the clear and present danger of Marcos’ tanks making their way to the camp, it was the most beautiful thing to stand in the middle of it all.

Children mounting the shoulders of their fathers and mothers, the elderly sharing refreshments, the poor and the wealthy breaking bread together. Millions of young people, barely out of their teens, singing “Bayan Ko” with fists raised.

When the tanks finally arrived, so did the moment of fear. Marcos and his sidekick cousin, Gen. Fabian Ver, was infamous for their bloodlust, fueling rumors of a possible attack on the people who stood between them and the rogue soldiers. I remember a US Phantom jet doing a flyby if only to avert a possible disaster.

However, the fear was short-lived. The people responded in ways no battle-scarred soldier could have imagined. Nuns held a rosary vigil in front of the armored combat vehicles as people handed flowers over to the soldiers. It was absolutely surreal, like something totally out of a book of fairy tales.

Trite as it may sound, but love seemed to have conquered all. At the end of the three-day “people’s revolution,” the public stormed the Palace and found no one at home. The dictator and his family had fled as exiles to Hawaii.

Filipinos stood free, at last, from the grip of close to 20 years of tyranny. All of the 35 years that have passed from then till now will never erase what has forever been etched in the minds of those who witnessed it: that it was possible to depose a strongman.

We all know the story of how prayers, flowers, and smiles stopped the rage of several tanks out to demolish the rogue officials. In those three days, without so much as a thought to our future, just the then and there, we showed the world how to dethrone a tyrant.

Whatever people have to say about that event in the years to come is no match to being there and seeing the episode unfold right before your eyes. Lest we forget, before the Arab Spring, before the Tiananmen Square Protests, way before the Yellow Vest Movement in Paris and Hong Kong’s Umbrella Revolution, Filipinos launched People Power.

It was the finest, freest three days I have ever known.