2022 is still a ways off, but the trial balloons for the upcoming presidential elections are now being released bit by bit.

The petition website Change.org is now serving as a barometer, however imperfect, of public opinion after two contrasting petitions have been lodged recently regarding Vice President Leni Robredo.

The first signature campaign dubbed “I Am Ready for Leni” was put up four days ago urging Robredo to run for the 2022 elections. It aims to have 25,000 signatures and so far has 21,000 to date.

“It is our deepest desire to see the Philippines back on its way to being one of the most economically progressive, politically transparent, humane and respected countries in Asia. We believe that Vice President Leni Robredo can lead us to this goal by leading the country as the next duly-elected President in 2022,” the petition’s brief stated. 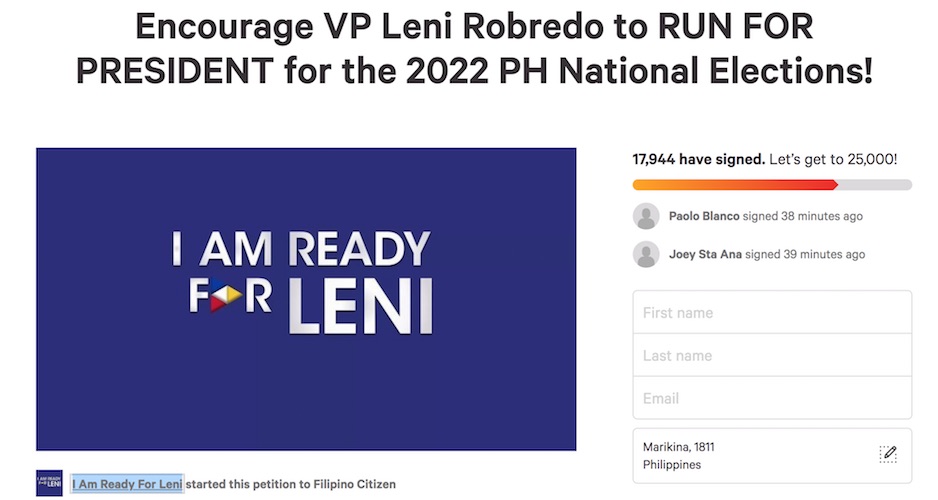 Robredo, who is the chairman of the Liberal Party, has been coy when asked about her plans for 2022, saying that it’s still too early to talk about it.

Days after the signature for Robredo came out, a counter-petition was mounted, this time expressing disapproval of  Robredo.

In tongue-in-cheek fashion, the petition this time bore the name “I Am Ready for Leni to Retire from Politics.”

It doubled down on the first petition by targeting to gather 50,000 signatures. It has 43,008 signatures thus far.

There is no way to verify as of yet whether those who have signed the two petitions are actual people, as chances are the numbers are bloated by troll accounts.

A quick browse at those sharing the petitions online shows that there are suspicious accounts on either side. These accounts are mostly made recently, only have a handful of followers and following, and have no indications, whether by activity or photo, that it is run by an authentic self.

Last Feb. 2, a motorcade urging Mayor Sara to run was also reported in Pangasinan. The motorcade was fronted by a vehicle with a tarp bearing the acronym ISDA for Inday Sara Duterte Ako. There is, it turns out, an ISDA Facebook page which was set-up as early as 2018.

Asked over GMA News last Sunday, Jan. 31, Inday Sara also remained dismissive of 2022 plans and suggested that she should instead be allowed to run for President in 2034.