We can only imagine the boy / falling, his face quickly being erased, / his body fed to the hungry / tales of inherited injustice.

His lines sting. The way a bullet grazes the skull.

His images bear the likeness of a man fettered to a stake and set on fire. You flip the page and there the smoke rises, the torrid film of burning skin and bone weighing down the cries of the dying.

These are images people don't normally want to look at or hold in their minds, at least, not for too long. A second more and they remain seared on the conscience like lesions refusing to heal.

A reader of some sensitivity may carry these images while at the dining table with their loved ones, at the café with friends, in the middle of time spent with their children. Like thieves in the night they rip a reader away from sleep, from a peace much too brittle to last anyone an hour.

Poems, for some, cannot but speak only of beauty, of inner longings, of hope. Of love accepted or unrequited. Art, they say, must find a way to skirt the more savage parts of reality because to even speak about such savagery is in itself barbaric.

Not for Jim Pascual Agustin.

Regardless of the distance, having lived in South Africa for close to three decades, this Filipino poet refuses to look the other way. He doesn't only stare into the abyss but stares it down. With every line he picks a fight with the darkness that haunts him and his country from a little over 11,000 kilometers away. 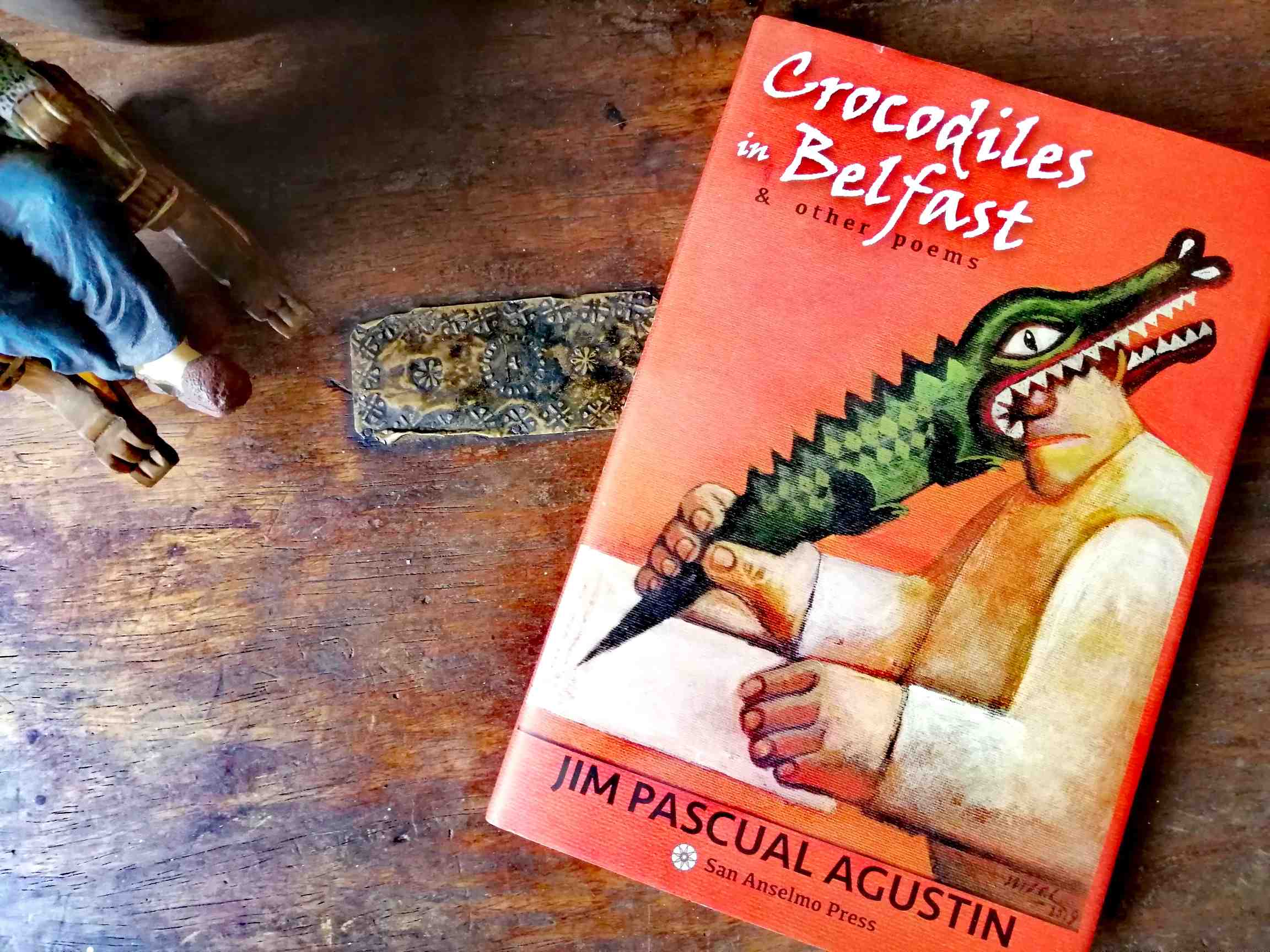 Crocodiles in Belfast & Other Poems, published by San Anselmo Press, is proof that if writing poems "after Auschwitz" may seem "barbaric," as Theodor Adorno wrote in this famous but often misquoted line, it is not impossible. In fact, if poets must speak, they must, with all skill and daring, speak of the unspeakable.

Poetry, if anything, must not flinch from being equally cruel, vicious, savage. Perchance even loud, to say little of being true. True to the lightning in the blood which gave birth to it. It must not cringe from speaking of "perennial suffering," which, according to Adorno in a later essay, "has as much right to expression as the tortured soul has the right to scream."

Based on the book itself, it seems less likely that Agustin wants to reshape the discipline of poetry into something more along the lines of an attack than a reason for discourse. He has proven here and in his other books that he is poet, not a rabble-rouser, which is to say that he refuses to extract his revelations from cynicism.

On the contrary, his excursions into the imaginary has taken him to images and places that are very real—to the scents, textures, and solidity of it all—arbitraging what we can all see and what only he can see, and offer what he has discovered as facts. This is especially tough when braided with the language of poetry.

Quite remarkably, Jim Pascual Agustin doesn't flinch from seeing all that needed seeing on two fronts. While he longs for his benighted Philippines to triumph over the intolerance displayed by the powers that be, this poet looks over his shoulders to the throng next to him—people who live with lions, as he calls them—and paints a picture too real to deny.

Now it doesn't matter whether black people, / white people, colored people or some other / shade of skin park here: the lions stare with eyes dull as cast cement. / This is where the workers used to pee.

What dazzles is the poet's courage to recall memories which are otherwise too tragic to remember:

Two years since the day / the sun scorched his blood / onto the asphalt, / a trapped ghost. / It is still there, close to the island / on the highway, a dark shape / stretched on the darker surface. / Invisible to other drivers. / Now think of a calculated kill, / the intentional randomness / of bombs raining. / How many ghosts will there be / in cramped school halls, in homes / of huddled children? Fear and grief / systematically torched. / Beyond the chemistry of blood / reacting with asphalt / in the midday sun, / there is something I'd like explained.

If poets must speak, they must, with all skill and daring, speak of the unspeakable.

Outside of the poems' expected musicality and rhythm, the quiet cadences that accompany the reader from one line to the next, what mesmerizes is Agustin's grasp of the capriciousness and the undependable nature of power in extremis.

True that there is a whole canon of protest literature where readers can get their hands on, within the world of Philippine letters no less, written by esteemed authors as Dr. Jose Rizal, Edgardo M. Reyes, Amado V. Hernandez, Nick Joaquin, Jose Y. Dalisay Jr., and more recently, various anthologies and books out to rip open past and recent dictatorships.

This begs the question: what use would another collection of poems serve?

Agustin’s work, however, does not begin and end with what some may call “dissent.” Rather, he remonstrates by using a language which frames the travails of the weak more than the ego of the powerful, chafing against the reality of intolerance and cruelty by showing their tragic results.

And he shows this at a scale so astoundingly ordinary that readers are left unmoored while reflecting on what seems as first glance as the mundane—like bread, horseshoes, or in Agustin’s case, a projector.

Few poets of such skill come to mind: Pablo Neruda and his España en el corazón (Spain in my Heart, 1937):

Cursed be those who one day / did not look, cursed cursed blind / those who offered the solemn fatherland / not bread but tears…

and Osip Mandelstam's The Stalin Epigram:

He forges decrees in a line like horseshoes / One for the groin, one the forehead, temple eye. / He rolls the execution on his tongue like berries. / He wishes he could hug them like big friends from home.

Agustin weighs in as he envisions a future where the shadows of dogs “spread longer, like wings”:

What matters is the control / of light trickling from a projector / the size of a teardrop. / For the State has finally learned that the patience of terrorists / can be matched by the swipe of a hand / in the dark.

More than exposés of the tragedy resulting from the savagery of power, Crocodiles in Belfast & Other Poems takes us to different worlds—from his beloved Philippines to South Africa, his new home—not excluding leaps into time, dream-like states, and the darkest corners imaginable.

Agustin's gift, more than any other, is his way of maneuvering the political into the imaginary without sounding moralistic. That he shows instead of preach, even after daring to write about powers and the truths behind material realities, makes Crocodiles in Belfast & Other Poems a tour de force in the lyrical power of poems designed to inconvenience the comfortable.

It's a book that not only reflects the courage needed for the times but also the promiscuities of a poet's clarity of vision, which refuse to lumber farther from the face of what is the here and now.

Jim Pascual Agustin is the recipient of the Sol Plaatje EU Award (3rd Prize in 2014, 2015 and 2017) and the Gabo Prize for Literature in Translation and Multilingual Texts from Lunch Ticket and Antioch University, among others.

His other collection, How to Make a Salagubang Helicopter & Other Poems, was a finalist in the 38th National Book Award for Poetry sponsored by the National Book Development Board and the Manila Critics Circle.

AirAsia offers flights for as low as P22 until Feb. 5

Revenge traveling back to Japan