Style Living Self Geeky News and Views
In the Paper Shop Hello! Create with us
Laperal White House in Baguio City from Shutterstock

Is there wisdom in acquiring a haunted house?

The story begins in front of an age-old white house along Leonard Wood Road in Baguio, a city where the temperature is always low and the air is still crisp.

It begins one fateful day at a time long forgotten. The story goes that a little girl, who is chasing after her beloved nanny, suddenly crosses the busy street and is hit by a speeding car. In that instant, between fractions of seconds, she meets her sudden death, leaving everyone who witnessed the tragedy in shock.

But the girl does not know it, so goes the story. She would never know. And so to this day, decades later and a world away from her time, she is seen during witching hour standing motionless in front of the house, waiting for her nanny.

A little girl
Inside the house, there is a lady with long cascading hair, who is often seen to this day.

Baguio residents say she would often be seen on the second floor looking out the window facing the road.

She is believed to be the nanny, who would also die decades later but would return to the house to stay with the little girl.

While most of us may not understand it, there are people interested in stigmatized properties or haunted houses.

The house is the famous white house of Baguio, also called the Laperal House, an imposing Victorian-style mansion that is teeming with so much beauty despite the eerie stories surrounding it.

The ghost stories are endless as they are varied, but the story of the little girl and her nanny is the most popular and widely believed to be true.

The house is believed to be haunted, locals say, but this did not stop taipan Lucio Tan, who has a multi-billion empire, from acquiring the property. 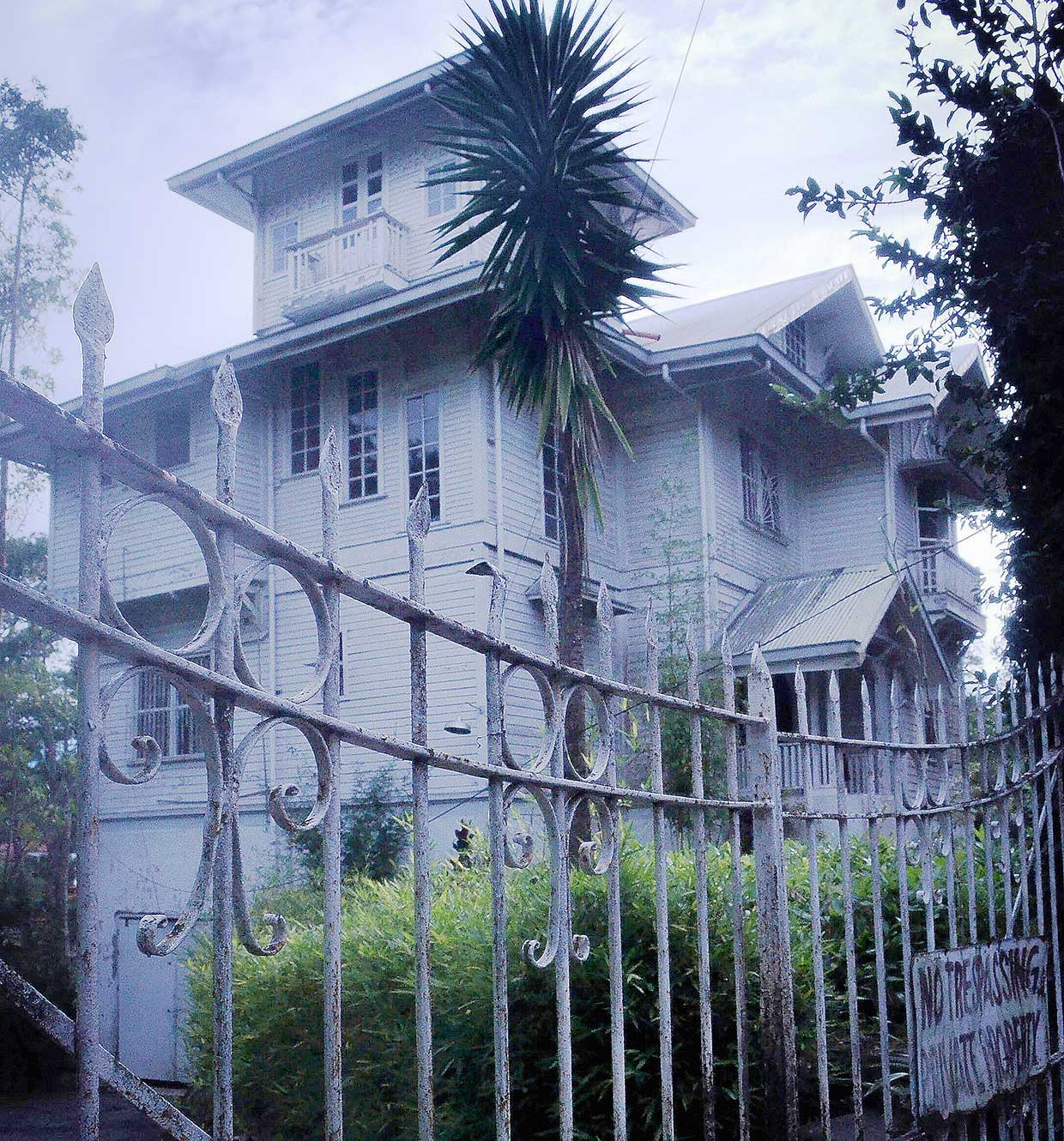 Vacation house
History has it that the Laperal House, belonged to Baguio’s prominent Laperal clan. The family patriarch Roberto Laperal built the house in the 1930s.

The house is made of narra and yakal wood and it stands out along Leonard Wood because of its classic and charming design, its gables, windows, and steep roof.

It was the family’s vacation house but history also has it that Japanese soldiers occupied it and used it as a garrison during World War II.

Its walls saw soldiers rape and torture women and murder suspected spies, so say stories told and retold by locals but often in whispers.

Over the years, persistent rumors of ghostly presence and sightings around the fabled house would be passed on from one generation to another.

Miraculously, the house withstood many disasters while other bigger and newer buildings in the city crumbled. One such tragedy is the deadly earthquake of 1990.

Others see some commercial value that other buyers may not.

In 2007, Tan acquired the house but locals say he never stayed in the place during his trips to the city.

At one point, the tycoon’s Tan Yan Kee Foundation transformed the house into a gallery featuring Ifugao bamboo carving and was then opened to the public.

Tan obviously saw the worth of the property.

Chilling tales
Experts said that due diligence is a step one should never skip in buying a property. This allows you to really assess if that piece of land or that house is worth putting your money into.

But what if you come across chilling tales about that property you’ve been eyeing as you do your research? Will you back out of the deal or does this make it even more attractive to you?

Everyone has a reason for buying a certain piece of property and while most of us may not understand it, there are people interested in stigmatized properties or haunted houses.

6 scary movies with scarier supernatural encounters on the set

“There are a good number of high-profile ‘haunted’ properties in the Philippines,” said Rodel Ambas, associate director for marketing of Pinnacle Real Estate Consulting Services Inc.

But surprisingly, their owners appreciate the oddity of these properties.

Ambas said these properties might be for niche buyers who have their own reasons for acquiring such assets.

“One might be that they are attracted to the history of the property, others might see some commercial value that other buyers may not,” he added.

Buyer beware
Stigmatized properties can be defined as properties with bad reputations that are shunned for reasons unrelated to their physical conditions.

Ambas said there is no way for buyers to determine if a certain property is stigmatized or even haunted as the Philippines’ overall attitude is very much a “buyer beware” one.

Whether or not it is haunted is difficult to prove from a legal standpoint, neither does it have any impact on its valuation.

“What buyers can do is to work with their own brokers to do the necessary due diligence,” Ambas said, adding that buyers can even do this themselves.

Asked if it is safe to buy a “haunted” property, Ambas said that property is always a safe bet from a real estate professional’s perspective — so long as it has no major structural issue and its location is deemed good and secure.

“Whether or not it is haunted is difficult to prove from a legal standpoint, neither does it have any impact on its valuation,” he added.

However, Ambas said that under the Code of Ethics and Responsibilities for Real Estate Service Practitioners, real estate practitioners must fully and truthfully disclose all pertinent and material facts involved in the subject property, including its history.

“Hence, any buyer can dig deeper before entering any contract by asking the right questions,” Ambas said.

It is not uncommon to hear stories within the industry where stigmatized properties were put in the market at a good or even below-market price, he said.

“You’ll be surprised that there are takers,” Ambas said.

“This is probably because the price is still the main consideration when making a purchase. And in a very competitive market, it’s hard to be very selective,” he added.

Good investments
Ambas said that once you put a property in the market, stigmatized or not, it’s basically a level playing field.

“The market really dictates whether a property is a good purchase or not and the market is pretty much biased toward properties in good locations, made by a good developer, and at good prices,” he shared.

Prime Philippines president and CEO Jet Yu said stigmatized properties can be seen as good investments because they can be acquired at a discount, depending on the case.

Is Malacañang Palace haunted? 16 presidents have lived there—and one ‘kapre’

“Investors of these types of assets often have a creative way to uplift the view of the property, normally by spending on improvements or renovations. Once successful, these improvements tend to make properties more attractive and can command higher rents,” Yu said.

He emphasized, however, that it takes careful investigation to determine the viability and cost-effectiveness of redeveloping the distressed property.

While good location, price and developer will always be the main factors to consider in buying any property, niche buyers of stigmatized or haunted properties may have their own reasons for acquiring these pieces of real estate.

“Now if the buyer is aware of the subject property’s (probably gruesome) history, the decision is really up to him to buy it],” he added.

Watch at your own risk: Horror TikTok accounts guaranteed to give you the creeps

“It’s a matter of strategically choosing the type and location that will bring you the best return (via rental income or capital appreciation) with the budget that you can afford,” Ambas said.

Moreover, Yu emphasized that by purchasing stigmatized properties that have good redevelopment potential, real estate investors can get a strong foothold in prime areas where available commercial land is usually limited.

He added that redeveloped stigmatized properties are often turned into commercial or residential developments.

“Depending on the level of refurbishment needed, cash outflows may be significantly less than developing an entirely new structure, which helps in terms of financial bottomlines,” Yu said. 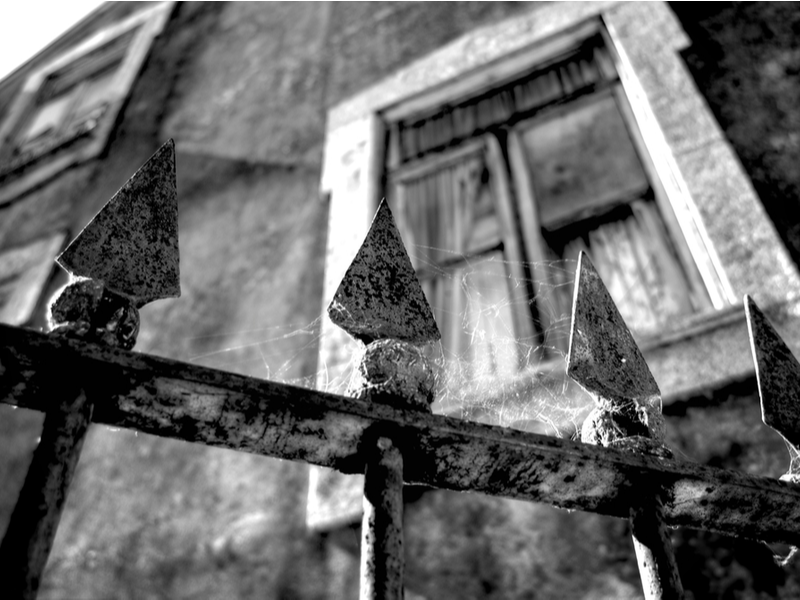 Indeed, quite a few people would buy a haunted house, according to a 2017 survey conducted by Realtor.com. as published in Forbes.

The survey, which queried more than 1,000 online respondents, revealed that 33 percent are open to living in a haunted house and another 25 percent would consider it. The remaining 42 percent said, “no way.”

Going back to the Laperal House, it is now one of Baguio’s famous tourism attractions.

Edgardo Manda, who used to head Ninoy Aquino International Airport and who is now president of the Philippine Bamboo Foundation, said Tan has allowed the foundation to use the place for its bamboo exhibit to educate visitors on the uniqueness of bamboo for climate change mitigation.

Tan also allowed the foundation to use it as an exhibit hall, the main attraction of which is “ghost hunting” and use Ifugao’s bamboo carving exhibit as an added attraction.

It was an instant hit and the place became a tourist attraction, Manda told The STAR back in 2018.

It is indeed a haunted house, Manda said, “but the ghosts are friendly.”

As for the taipan, he remains the owner of the Laperal House. Will he sell it one day when the value has appreciated? Only time will tell. – with Catherine Talavera

(This story first appeared in the The Philippine STAR's The Property Report page.)

Iris writes about the intersection of business and politics in the Philippines in her column Eyes Wide Open, which appears every Monday and Thursday in the Business section of the Philippine Star. She is also the editor of PropertyReport PH, the paper's property section.