The Queen’s Gambit, Netflix’s buzzy, mid-Century tale of chess dominance by an unlikely prodigy, has landed squarely on many people’s must-watch lists. It’s not immediately apparent why.

Unlike the streaming service’s recently popular offerings, there are no colorful exotic animal handlers, immortal assassins or time-traveling royals. The topic isn’t exactly heart-pumping territory. The characters are all ambiguously drawn.

What it offers, however, is a stylish, sophisticated take on the classic underdog sports film, with some pleasant twists. Instead of a scrappy band of misfits that need to be whipped into shape with some training and guidance, we have an exceptionally gifted outsider who triumphs despite indulging her demons. Instead of fast-paced team sports, there’s the cerebral world of chess. Instead of the classic montage of struggle to mastery, we have a protagonist who is so sharp, talented and consistently good from the get-go that the foregone conclusion that she will outclass nearly every opponent she faces onscreen is refreshing instead of predictable.

“It’s an entire world of just 64 squares,” says Beth Harmon, the chess prodigy whose story is told in The Queen’s Gambit. “I feel safe in it. I can control it. I can dominate it. And it’s predictable, so if I get hurt, I only have myself to blame.”

These lines, uttered in an interview with Life magazine in episode three, are Beth’s thesis statement, her reason for clinging to the sport. Chess is her anchor in every sense of the word – a steady space where she can exert control despite living in a world that denies it from her. Later, it is an albatross around her neck as the burden of her own talent threatens to sink her.

Based on the 1983 novel of the same name by Walter Tevis, The Queen’s Gambit tracks Beth’s story, from landing in an orphanage at nine years old to the 1968 Moscow invitational where she faces her nemesis.

Tevis based the chess in the novel on his own experience as a class C player and drew inspiration from real-life champions like Bobby Fischer and Boris Spassky, though Beth Harmon herself is a fictional character.

The transition of novel to miniseries is so well done that "Is The Queen’s Gambit based on a true story?" is the first search term that comes up when googling the show.

This is the work of director and co-creator Scott Frank, whose writing credits include critical and commercial smashes like Logan, Minority Report and Get Shorty (having chess grandmasters Gary Kasparov and Bruce Pandolfini as consultants to the series didn’t hurt either).

Frank accomplishes what so many translations of books to screen fail: making pages of a book’s subtext understandable to the viewer without burying them in spoken exposition.

Frank does this with production designer Uli Hanisch and costume designer Gabriele Binder. Together they create a visual language so vibrant and coherent, it does most of the heavy lifting of clueing the viewers into the turmoil that is often left unsaid by the dialogue. It is that push and pull of on-screen restraint and sub-textual tension that makes the series compulsively watchable.

The frequent representation of Beth imagining games as giant pieces moving in the ceiling of her rooms is filmed with hints of horror movie ominousness.

A great example is in the first episode, when nine-year-old Beth descends into the basement of Methuen, the orphanage she calls home after an accident claims the life of her mother. She notices the custodian, Mr. Shaibel, playing chess by himself. It’s dark, the basement is creepy, Mr. Shaibel is taciturn as she asks him to teach her.

There is no fear or uncertainty on the face of Isla Johnston, who plays the young Beth, yet we feel it for her. It doesn’t need to be said that this is a potentially dangerous situation for an orphaned child. The expectation set up for us by the staging is quickly subverted when Mr. Shaibel agrees to teach her and gradually becomes the father figure she never had.

Later, Beth (now played by Anya Taylor-Joy, in a pitch-perfect performance), is adopted by the Wheatleys. While there are hints that her new parents may be ambivalent about bringing her into the family, the production design on the Wheatley’s house tells us everything else we need to know about the dysfunction in this home. 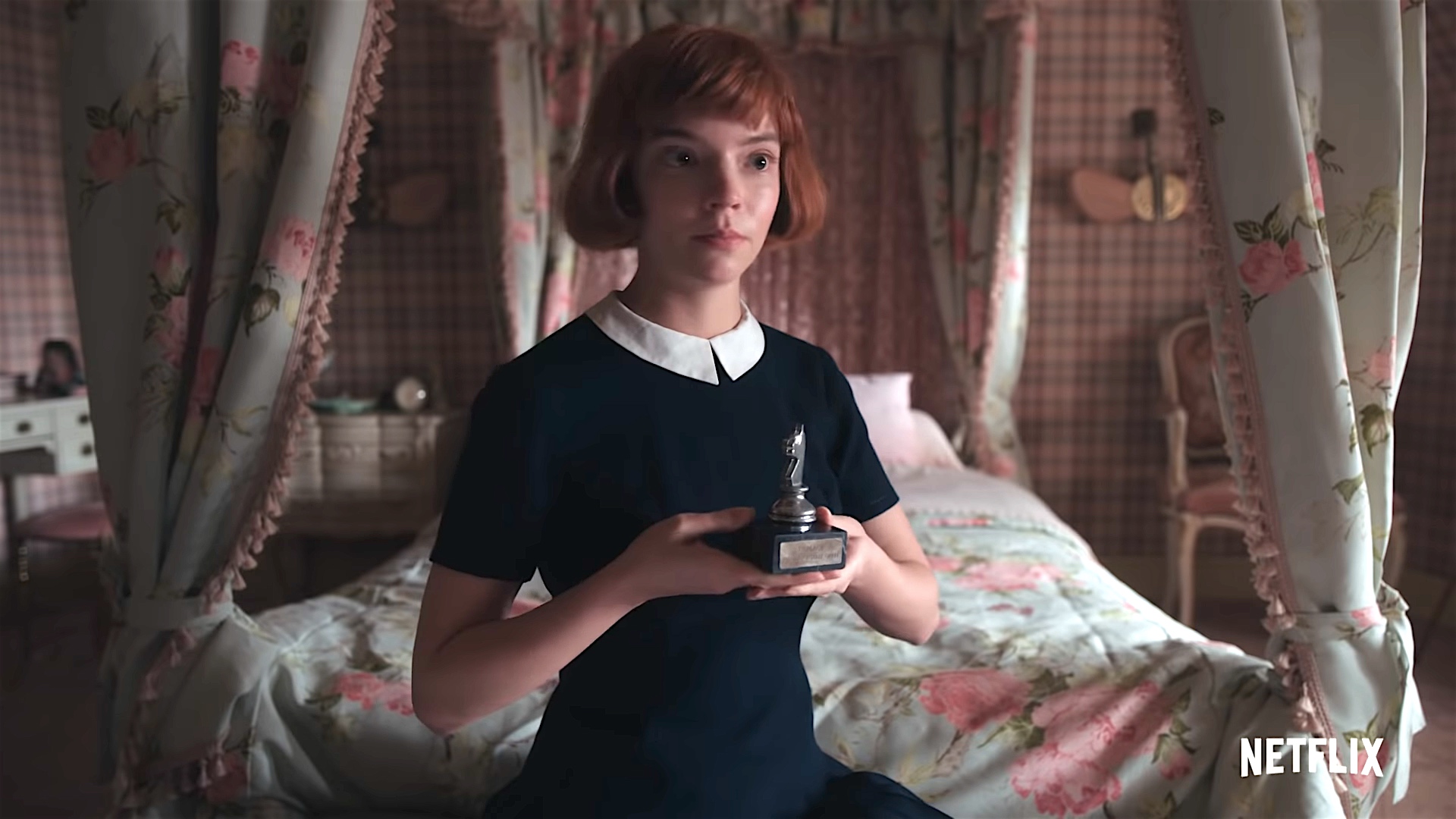 Alma Wheatley’s bedroom, in particular, is psyche made into interior décor: there’s overwhelming floor to ceiling chintz, sickly pastels and a suffocating abundance of ruffles and frills, a perfect representation of an intelligent, talented woman trapped and thwarted by the expectations on her as a wife.

The frequent representation of Beth imagining games as giant pieces moving in the ceiling of her rooms is filmed with hints of horror movie ominousness, especially since she becomes capable of this via her dependence on tranquilizers. (Addiction, like chess, become the two pillars of her life introduced at the orphanage.)

Beth’s costumes are used to set her off from her surroundings at the start of the story and reinforce her outsider status. Gradually, as she ascends her sport’s rankings, her clothes become more stylish and more in tune with her surroundings. Her gorgeous ensembles often echo the color scheme of a chessboard: black, white and shades of brown. She may be a beautiful redhead who “looks like Ann Margret,” as a Russian chauffer comments, but she firmly belongs in this world.

For pure visual candy, the many different ways the chess matches are staged are good enough to be framed. There’s the groovy, sunny 1960s vibe of the Las Vegas scenes; the gorgeous stained-glass windows echoed by the patterned carpet in the Aztec Palace, setting of the Mexico tournament, and finally, the nearly medieval, dark wood and interrogation-ish lighting of the Moscow invitational.

Even viewers such as myself with no knowledge of chess were on the edge of our seats with the way the matches were filmed. The score, actors’ expressions and the edits of chess pieces slammed or sliding down checkerboards were enough to convey the stakes and glue our eyes to the screen.

Helping Beth along in her journey are compellingly drawn supporting characters, each fascinating in their own way.

Aside from Mr. Shaibel, there’s Jolene (a crackling Moses Ingram), another orphan at Methuen who reappears later in the series at a crucial point in Beth’s career. Beth’s adopted mother, Alma Wheatley (played with mannered subtlety by Marielle Heller, who directed A Beautiful Day In The Neighborhood), starts off as a lonely woman unable to relate to the strange girl she’s adopted. Eventually she becomes Beth’s agent, friend and full-fledged mother. Their mother-daughter relationship is portrayed with tenderness and compassion, despite the pair’s disagreements. 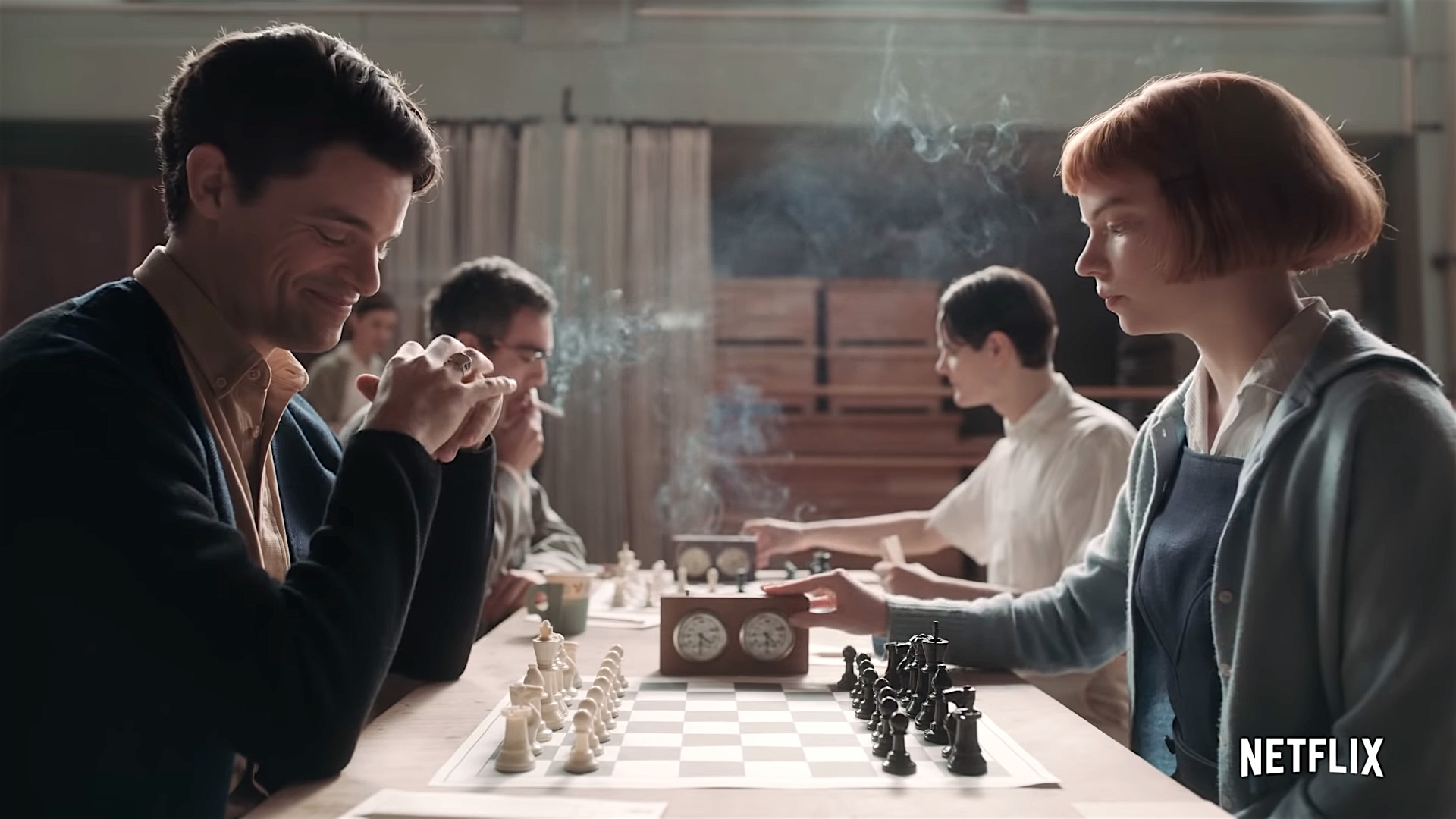 Beth also has a talent for turning chess opponents into loyal fans. She beats Kentucky state champion Harry Beltik (played by Dudley Dursley himself, Harry Melling) and he ends up so in love with her he says, “You’re the reason I got my teeth fixed.” Thomas Brodie-Sangster (the drummer boy from Love Actually all grown up) plays the knife-wielding, Indiana Jones-costumed US champion Benny Watts. After Beth beats him in an epic rematch, he invites her to New York to train for a tournament in Paris, where she will come face to face with the Russian champion, Vasily Borgov. Even the twins who discourage her from entering her first tournament pop up in later episodes, all mesmerized by Beth’s talent and beauty.

In contrast with Beth’s friends and fans are the memories of her biological mother, which start the episodes. Alice Harmon, whom we learn from a flashback has a PhD in mathematics and comes from money, was a tortured soul who tells her daughter “The strongest person is the one who isn’t afraid to be alone,” and “It takes a strong woman to stand by herself.” This lone wolf message of self-sufficiency is at the heart of Beth’s neurosis and something she learns to overcome (with a little help from her friends).

The view that a woman will be respected on the merit of her talent and successes alone is a comforting fiction told by this show.

The secret to Borgov’s dominance, says Benny Watts, is that “The Russians help each other. We Americans are too individualistic.” Beth yawns in his face at this, yet later in the series, it is this same unlikely teamwork approach to chess that helps her in a crucial, career-defining match.

It is ultimately the theme of found family coming together to support and recognize Beth’s talents that make The Queen’s Gambit such a satisfying show. Though the series mentions how Beth is a woman in a male-dominated sport, it is not made into a major struggle for her. In fact, once beaten, her male counterparts almost all immediately recognize her dominance.

While chess has produced real-life female grandmasters who’ve beaten male superstars – most famously Judit Polgar against Gary Kasparov – the readiness of men to concede defeat to a woman in an elite field seems unlikely in real life, where female experts are often mansplained or dismissed by casual male observers (just scroll Twitter for some fun examples.)

Beth has to score one against the patriarchy, however. A confrontation with her adoptive father, Allston Wheatley, is played with enough sparkling venom that the actor who plays her lawyer slinks out of the scene, afraid to show his back to her.

The view that a woman will be respected on the merit of her talent and successes alone is a comforting fiction told by this show. Another is that a group of disparate friends and acquaintances will put their own issues on hold to come together and help this same talented woman from following her most self-destructive impulses and instead reach her full potential.

These warm and fuzzy messages, together with those dazzling visuals, clever direction and compelling performances, make it abundantly clear why The Queen’s Gambit is on everyone’s watch list.

Katrina R. Atienza is a marketing executive by day and a true crime, horror and K-entertainment obsessive by night. She keeps balanced by writing and reading romance novels as part of the #Romanceclass community.