Today in ridiculous news, an Among Us crewmate shaped chicken nugget from McDonalds in the United States is fetching thousands of dollars in bids on the online auction site, eBay. 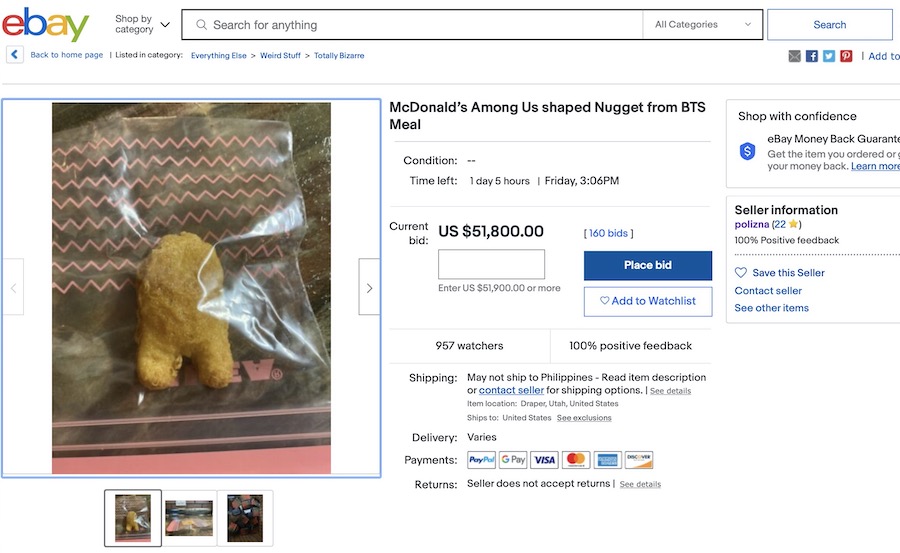 The item is described as an “Authentic Among us shaped Chicken McNugget that originated from a BTS Combo meal.” The special unique meal package by McDonald’s in endorsed by South Korean pop band BTS. The item is also described as “used”.

The listing, which falls under the category of "Weird Stuff" on the auction site, states that the item will be frozen and air sealed before being shipped off to the successful bidder. The seller will also throw in some Szechuan sauce at buyers request. The auction is expected to end on Friday (June 4).

A link to the totally bizzare auction item was posted by the verified Among Us account with a tweet on June 2, stating they were unsure how to feel about the nugget’s fetching price. In a later tweet, the Among Us team asked McDonald's to “split the cost” or "send them one for free."

@McDonalds split the cost with me or send me one for free!! ok thank u

In an interview with CNET, eBay seller polizna said they had only expected to fetch around $50 for the nugget, adding that the final bidder may not commit to the purchase.

“I had figured it would get somewhere around US$50 but nothing like this, at the end of the day there are some people out there who *would* pay some absurd price for a McDonald’s chicken nugget, but I don’t think the final bidder will actually go through with the purchase as there are lots of people who bid on things like this for the ‘memes’,” polizna, who is identified only as Tav, told CNET.

Among Us, Innersloth’s massively popular murder mystery game rose to popularity during the lockdown. The multiplayer social-deduction survival game assigns players roles as crewmates on a ship while one of them will be secretly given the role of an impostor. The objective of the game is to correctly identify the impostor before he or she kills everyone else and sabotages the entire spaceship. The game is available on multiple platforms including mobile, PC and console.

As expected, the uniquely-shaped snack has attracted a few copycats, including other “rare” Impostor type chicken nuggets that have topped $20,000 and $14,000 in bids.

You may want to inspect your snacks more thoroughly in the future before chowing down.

(Images via Among Us)