With the 2020 Tokyo Olympics days away from its closing ceremony on Aug. 8, a satirical online petition wants to make sure that the next Olympics is inclusive to, well, anime fans.

An online petition titled "Make Yugioh an Olympic sport" is racking in signatories requesting the classic childhood cards game to be included in the Olympics' prestigious sports lineup. The appeal was made by YouTuber Xiran Jay Zhao on the online petition site change.org to "apologize to Japan for making them go through with the 2020 Tokyo games."

Konami announces Yu-Gi-Oh TCG ‘Ghosts from the Past’ pack

"It is an absolute injustice that the game of Yugioh: The Trading Card Game is not a legitimate sport in the Olympics," the petition's caption reads.

It goes to explain that playing Yu-Gi-Oh! requires "dexterity (when drawing the cards), athleticism (when playing the cards), and endurance (when you're in round 10 of a YCS)" apparently fit for an Olympic athlete.

"I now call on the International Olympic Committee to add Yugioh as an official Olympic sport to both mend this injustice and to apologize to Japan for making them go through with the 2020 Tokyo games," the YouTuber concluded. 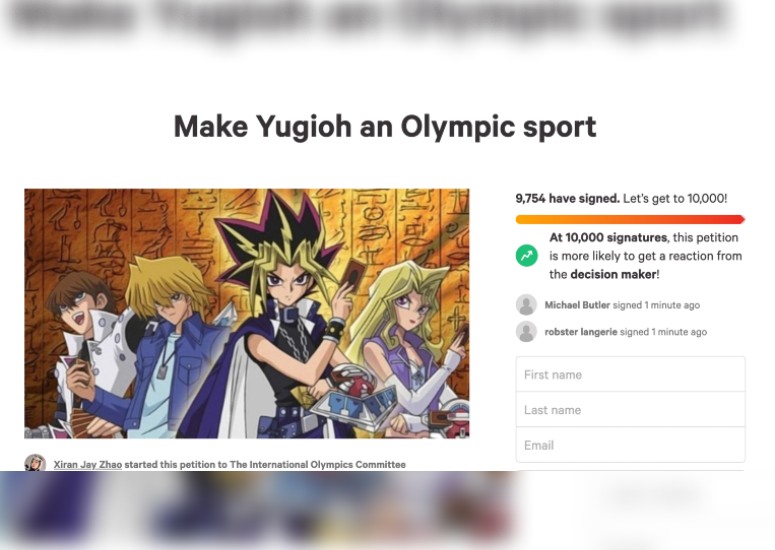 Once any change.org petition reaches its target goal, the demand will be brought to a decision-maker or "a person or group with the power and authority to affect the issue at hand." Zhao has called forth the International Olympics Committee for this pressing petition.

The gays are winning: Tumblr's top 12 fandom ships for 2022 are all queer