Style Living Self Celebrity Geeky News and Views
In the Paper BrandedUp Hello! Create with us
Jose Mojica

“Collage,” the American artist Robert Motherwell declares, “is the twentieth century’s greatest innovation.” But what has become of it in the years to come?

Rock musician Marasigan, who is well known for his contribution to bands Sandwich and the Eraserheads, presents a series of collage work using cutouts. Beside his works are QR codes that open to a music link to accompany the tangible art. Spatial Derivatives marks the musician's first exhibit for his collage works.

"I don’t think of myself as a visual artist, but just like punk rock taught us, its ok to try it yourself. It's a collection of cut and paste pieces I've started during the lockdowns in 2020. There’s an accompanying music piece to every artwork that you can listen to via QR code," Marasigan wrote on Instagram.

Talyer 15, formerly known as Primal Screen in their old location, is one of the newest studios in the Metro. Upon entering the exhibit, one would find an interesting juxtaposition between medium and form of the art works, and between the works and the space.

Mounted on white painted panels, with most of the works encased in uniform glass, the display of art looks aesthetically clean. No show titles or large exhibit notes to welcome the viewer. There are also no labels, which brings the usual question, “Whose work is this?”

One, then, just allows the work to stay alive in the consciousness. As Ocampo notes during the interview, she wants people to like the work, not because they know who made it but because of the connection they developed with it.

Given the number of works and the artists who participated, putting them all together for display came with challenges. Ocampo shares she had to change some layout plans to fit the pieces together in the space. The result is total coherence. It is as if it is a one-person show.

The idea for the exhibit started with Ocampo wanting to do a collage show, a form that tends to be overlooked. She believes many great collage artists in the Philippines should be featured. There is also an attempt to showcase that a collage is “more than just being cut and paste.”

When asked about her process of curating, she mentions she had a very casual approach to this exhibit. “I chose the artists based on my personal knowledge of their works. I wanted to do a collage show and listed down artists who I knew work with collage. I didn’t restrict them. I didn’t give them any theme. Because more or less, I had an idea of what was going to be the output.”

But the term casual could be deceiving. Ocampo is speaking with 17 years of experience in curating shows for galleries. She also has worked with many of the artists in this exhibit. Her clear intention takes the show to its success.

Ocampo shares she had no idea that Marasigan was doing collage works. They were having lunch once, and she told him she wanted to put up a collage show. That was when he revealed that since the pandemic, when there were no gigs, and he could not perform, he started doing some collage art pieces as an outlet.

More interesting is his inherent artistic sensibility. Although new to the practice of visual arts, Marasigan already has a process that came from his music practice. Collage is the perfect form since he understands the process of sampling and cutting different riffs and beats from various sources and then putting them all together to create a song.

The collage, Ocampo mentions, “is a tangible form of his way of doing things.”

Collage comes from the French word “coller,” which means “to glue” or “to stick together.” But this does not imply collage art is limited to what can be glued on paper. As they work on the pieces, each artist applies their own interpretation of the form, opening it to more possibilities.

As Iñigo de Paula writes in the exhibit notes, “During the process of creation, the artist faces three choices: do they elevate their source material? Do they debase it? Or do they transmute it into something totally disconnected from its original purpose?”

In this exhibit, some artists incorporate different elements into their pieces. Yu, more known for her photography, does not succumb to the usual photo collage. Instead, she makes collages act as the subject of her photographs that appear on video. Anading’s work is an installation where a lightbox surrounded by rugs projects a video of passing cars. Marasigan presents a series of collage work using cutouts but beside his works are QR codes that open to a music link to accompany the tangible art.

Other artists whose primary medium is collaging continue to use paper materials to present images that engage the visual sense, tease the imagination, then question preconceived meanings.

In the notes, de Paula also writes, “The cutting is a sacrificial act, while the assembling presents itself as a moment of rebirth.” When asked to elaborate, Ocampo explains that it is learning to focus on what is necessary because “you’re tearing something up to come up with something new.” The process ends with the rebirth of new work. 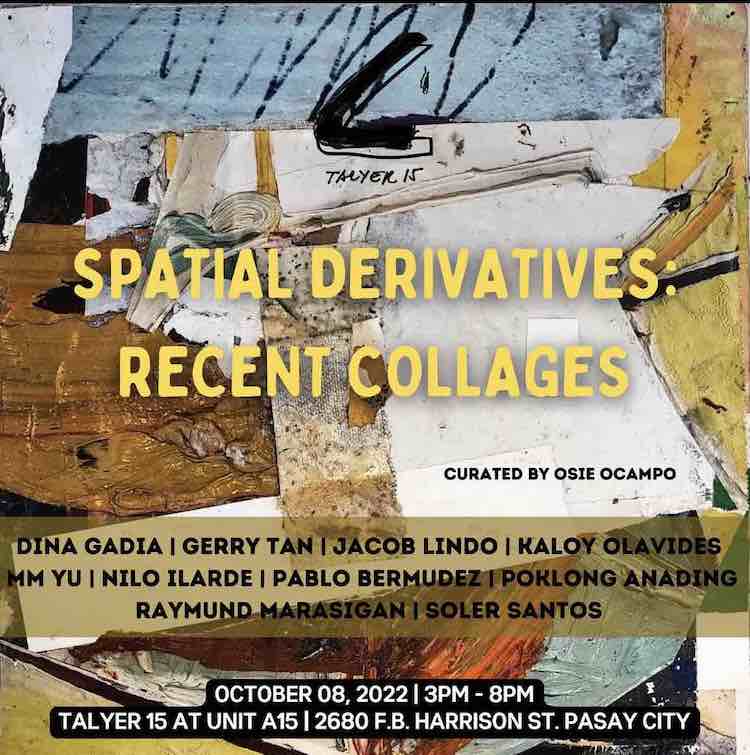 The collage as an art form continues evolving, with artists still trying to innovate. To insist on flatness and the familiar form defies the freedom of the art—of art.

“Spatial Derivatives: Recent Collages” launched on October 8 and will run until November 12, 2022 at Talyer 15, 2680 F.B. Harrison St., Pasay City. Visits to the art exhibit is strictly by appointment. Message @talyer15 on Instagram to book your schedule.

Jose P. Mojica, M.A., teaches communication and media at the University of Santo Tomas Faculty of Arts and Letters under the Department of Communication and Media Studies.